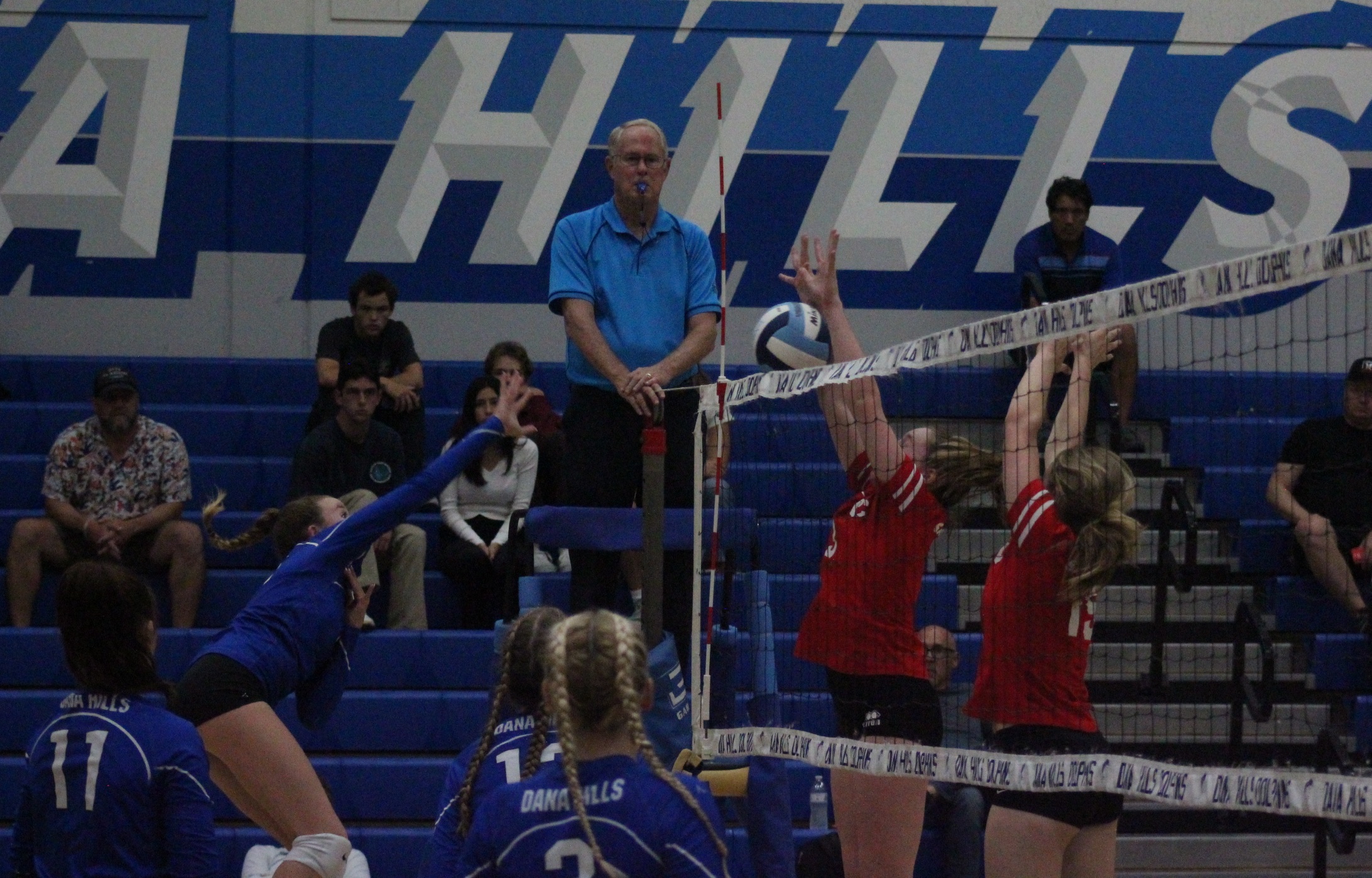 “We obviously did not start as well (in the first set), and that’s a really good team, well-coached, won a lot of matches,” Dana Hills coach Tom Hoff said. “It’s great to just make it difficult on them. We just need to execute a little bit in the fourth and the fifth, but proud of the way we got better today.”

San Clemente (16-6, 2-0) next hosts Aliso Niguel (10-3, 1-0) on Thursday, Sept. 22. The Tritons and Wolverines split the South Coast League championship last season, and while Aliso Niguel lost the postseason seeding coin flip, the Wolverines took advantage on a run to the CIF-SS Division 2 title.

By all rights, San Clemente, ranked No. 8 in the combined CIF-SS Division 1/2 rankings, should have won in a walk over an up-and-down Dana Hills. However, whether it was due to an easy opening set or the looming Aliso Niguel match, the Tritons’ focus seemingly wavered to put them in a tough spot on Tuesday.

“That’s something that we struggle with day to day,” San Clemente coach Casey Swenson said. “We have all the talent in the world, all the ability, and I really am proud of our girls, because every day we do get better. In this area, we do make decisions and plays we weren’t making in August. That’s the thing we’re most focused on is when we find ourselves in situations that we shouldn’t be in, how can we dig our way out?”

“It’s disappointing,” Swenson continued, “because this is such a great rivalry match for us, and I have so much respect for Coach Hoff and the effort Dana put into the match, and I don’t feel like we gave them our best.”

At the same time, Swenson praised his team’s maturity in tight games and said when “the rubber really hits the road,” the Tritons are able to turn it around. That showed in spades in the early run of the fifth set.

The attacking skill of senior Lily Dwinell, the defense and setting of senior Reese Torticill and the energy of senior Hanna Eberle pushed San Clemente out to a 6-1 lead in the tie-breaking frame and paced them throughout the final set.

“We look at our seniors, we look at our leaders like Lily, and we go, ‘Hey, ball’s in your court. What do you want this to be?’” Swenson said, “and that’s where I’m really proud of her and our team is she definitely delivered. We’re having trouble stopping the left side, balls are getting through us and then, all of a sudden in the fifth game, she’s just a complete wall.”

Even still, Dana Hills pushed back again, as the Dolphins forced a 12-12 tie and San Clemente’s second timeout. Once more, the Tritons found their poise after the pause for the 15-12 win.

San Clemente opened the match looking ready to dominate Dana Hills, as the Tritons surged to 12-4 and 21-6 leads in the first set. Dana Hills scrapped together some confidence points late, but San Clemente claimed the first set with ease, 25-13.

In the start of the second and third sets, the script completely flipped with Dana Hills grabbing the upper hand and threatening San Clemente.

Dana Hills led 6-1 in the second set, but San Clemente fought back to tie the set, 12-12. From there, the teams traded points and tie scores all the way to 21-21. Five straight points by Dana Hills out of its own timeout and through a San Clemente one made that 21-21 tie and put the Dolphins ahead, 24-21. The Tritons pushed back two set points, but Dana Hills closed it down, 25-23.

In the third set, Dana Hills led 4-1 early and pushed out of a 7-7 tie for a 14-9 lead midway through. However, San Clemente again clawed back to tie the match from 17-17 to 22-22. The Tritons actually pushed to the precipice of a set win a 24-22, but Dana Hills fought off two set points, including a lengthy rally to tie the match, 24-24. The Dolphins nailed the next two points to take the set, 26-24, and put the Tritons on the edge.

Dana Hills again earned a four-point lead in the fourth set, but with San Clemente staring down the barrel of an upset, the Tritons turned it on with an 8-0 run to go from four down to four up, 14-10. Dana Hill would climb back to as close as two points down, but San Clemente held off the charge, 25-21, to set up the decisive fifth set.