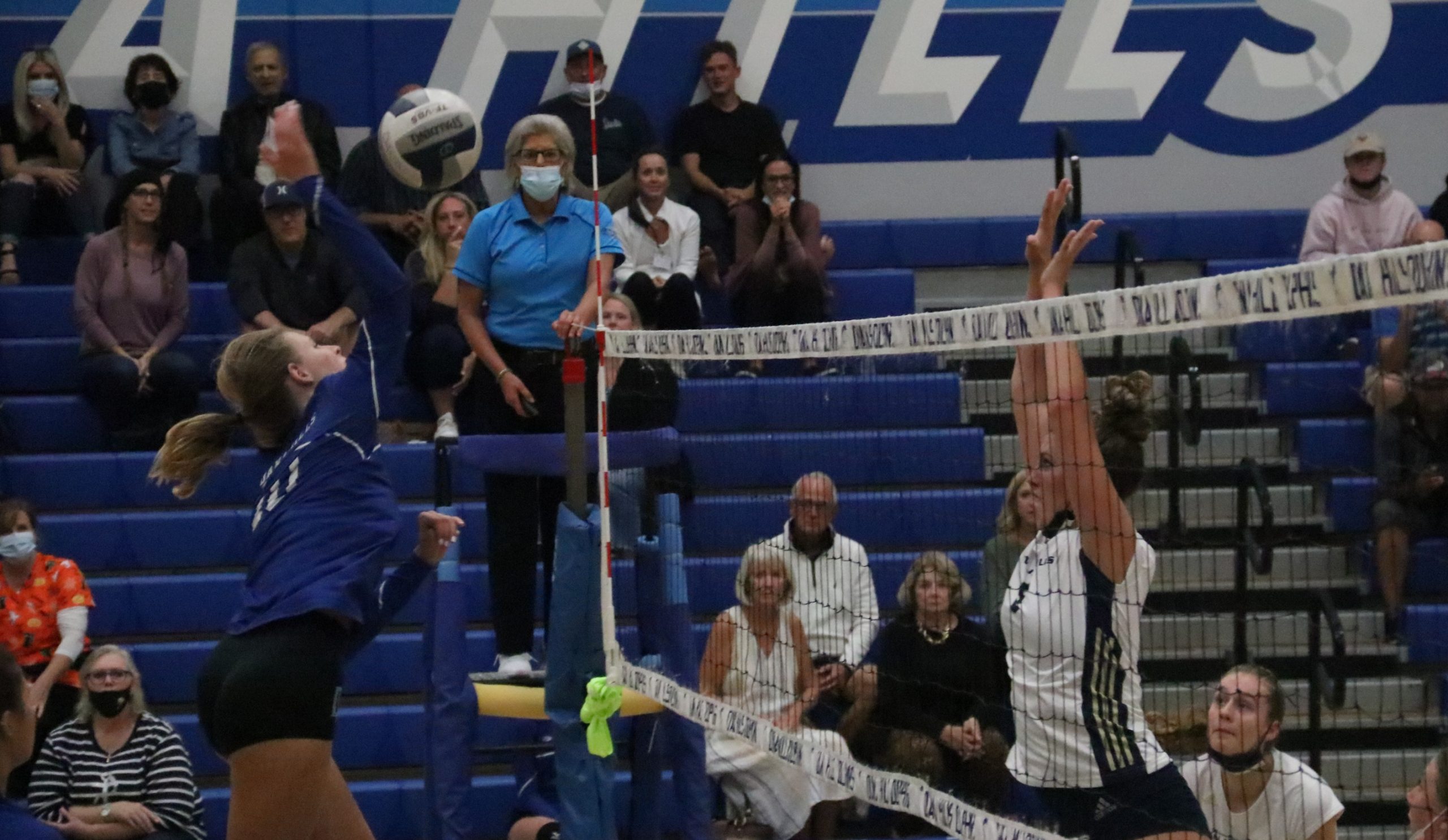 Through the first round of South Coast League girls volleyball, a very clear definition of the five-team league had already shown itself.

Aliso Niguel and San Clemente had dropped only one set combined against the league’s other teams going 3-0 to establish the two teams as the favorites for the league title. On the other end of the spectrum, Trabuco Hills had been swept in all four of its league matches to settle in at the bottom.

That left Dana Hills and San Juan Hills as the middle of the South Coast League, and assuming that Aliso Niguel and San Clemente were the league’s top two teams, the matches between the Dolphins and Stallions are essentially playoff matches for the South Coast League’s third and final automatic playoff berth.

The first of the two scheduled “de facto” third-place playoff matches played out at Dana Hills High School on Tuesday, Sept. 28, and the tight race in the standings reflected the margin on the court.

Either Dana Hills or San Juan Hills led by more than four points only twice in the first three sets, and after giving up the first set, it was the Dolphins that found the edge to defeat San Juan Hills, 22-25, 25-22, 25-19, 25-19, and get the leg up in the league playoff race.

Dolphins are 2-2 in the South Coast League and hosts Aliso Niguel next Tuesday. @dhhs_athletics

“They know their standings,” Dana Hills assistant coach Stephanie Kislig said. “They know what they need to do. I think that is good motivation for them.”

Dana Hills (7-11, 2-2) next hosts league-leading Aliso Niguel on Tuesday, Oct. 5. Aliso Niguel took a five-set battle against San Clemente on Tuesday for the inside track at the league title.

San Juan Hills (7-11, 1-3) plays Aliso Niguel first in their next match at home on Thursday, Sept. 30. San Juan Hills hosts the second match against Dana Hills in both teams’ league finale on Oct. 13.

Kislig ran the bench for Dana Hills against San Juan Hills as Dolphins head coach Tom Hoff missed Tuesday’s match due to shoulder surgery. While there were some early troubles and organizational miscues, Dana Hills found its stride to take the match.

“In the first game, we had quite a few errors, quite a few serving errors, which opened up room for San Juan to come in,” Kislig said. “In the last three sets, we really tightened that up. A lot less errors, a lot less serves missed, closing the block better, picking up the tips that were going down in the first set. Those little adjustments and tweaks really help.”

The second set was similarly even, as the team’s played to 12 tie scores and Dana Hills led only by as many as three points. Out of an 18-18 tie, the teams traded spirited points, including a few long rallies each won by Dana Hills. With momentum on their side, the Dolphins won out the second set, 25-22.

Both teams traded points to an 11-11 tie to open the third set. Dana Hills built out a small lead, and on a back-to-back aces by Tatum Hoff, Dana Hills earned a five-point lead, 22-17. The Dolphins would then lead and win by six points, 25-19.

In the fourth set, Dana Hills took control with two opening points by Hoff and then never trailed again. The set was tightly played, but the Dolphins maintained their pace for the set win, 25-19, and the match victory.