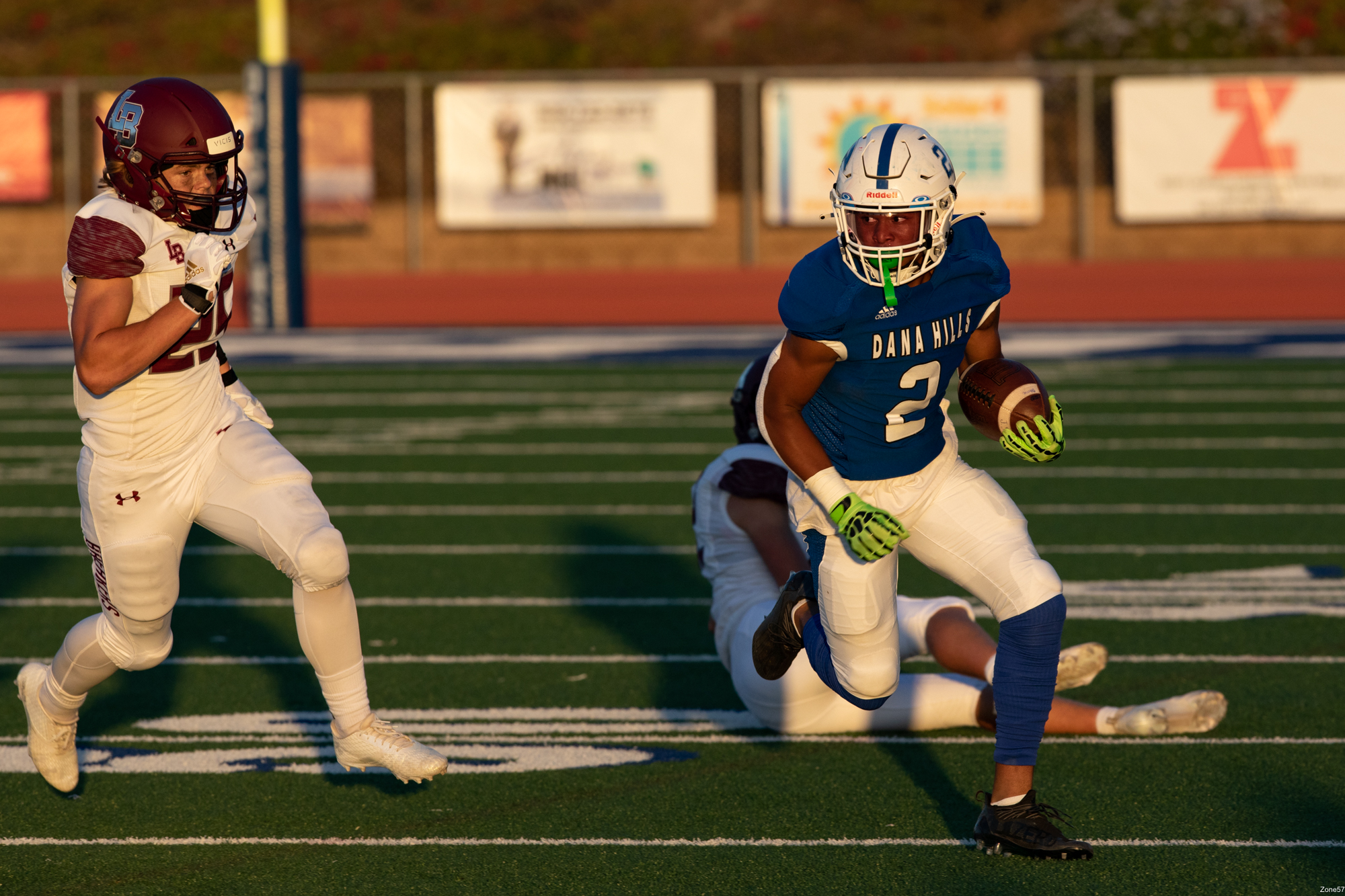 IRVINE – Based on the scoreboard and stat sheet alone, Dana Hills looked like it won in a walk on Friday night, but underneath the big scoring plays, the Dolphins know there is still plenty to work on before the league season begins.

However, before the game, Dolphins head coach Tony Henney said he wanted to see a clean and complete game from his team after Dana Hills didn’t necessarily have that in a similar blowout of Woodbridge, 34-7, last Friday also at University High School.

The Dolphins had four touchdown passes negated by penalties, were stopped on fourth down three times, lost a fumble and were assessed seven penalties for 65 yards, including. Dana Hills finished with 10 penalties for 90 yards against.

“I think you’ve got to stay positive and recognize when things don’t go exactly how you wanted it to, how did you respond?” Henney said. “I thought we responded well in the second half. Was it perfect? No, but it was better. You have to take that to Monday’s practice and build on it.”

TOUCHDOWN: Dana Hills on the board again. On their first drive of the half, Kelly hits Chambers who breaks a 44 yard TD pass. Kelly’s 3rd TD pass. @bokellyy @OwenCha16498928

Still, Dana Hills got those big scoring plays, including scores on its first three second-half drives, and the Dolphins defense ultimately did what it needed to against a shorthanded University (2-3). Dana Hills held the Trojans to just one yard passing and 27 yards rushing in the first half, and University gained only 93 yards of offense total for the game. The Dolphins also forced a safety in the fourth quarter.

In addition to Black’s big game, senior receiver Owen Chambers caught both of Kelly’s two second-half touchdown passes with five catches for 145 yards in the game. Chambers also recorded a sack on defense.

“All of our receivers are pretty good and bring something different to the table,” Henney said. “Owen is just so physical and fast. Omar is so quick and shifty. James (Allemann) is big. It’s just nice having an offense where we can distribute the ball and just run the play. You don’t have to force it to one guy.”

Dana Hills can look to improve its game next Friday on the road against Beckman at Tustin High School. The Dolphins are next home on Oct. 8 against Northwood.

Black put Dana Hills in the lead immediately by returning the opening kickoff 87 yards and barely being touched on his way to the endzone. Black found blockers to his left, outmaneuvered one defender at midfield and sprinted effortlessly the rest of the way.

TOUCHDOWN: Out of the gate, and Dana Hills is on the board. Omarjaye Black returns the opening kickoff 87 yards for the score. @omarjayeblack1

University then found some success in the running game on its opening drive to eat up clock. While the Trojans converted one fourth down on a Dana Hills penalty, the Dolphins stood up on fourth down at their own 36-yard line.

Two plays later, Kelly hit Black completely uncovered on a short slant, and Black went right up the middle on a 63-yard score to push out Dana Hills, 14-0.

However, inconsistency plagued the Dolphins again with a turnover on downs on their next drive, and two touchdown passes called back on the following drive, which ended when the Dolphins didn’t convert on 4th-and-16.

Dana Hills collected itself for the second half and was much more efficient.

Kelly threw a 44-yard catch-and-run touchdown to Chambers, who battled to the endzone, on their first drive of the third quarter, and after a fourth-down stop of University to open the fourth quarter, Kelly hooked up with Chambers again on a 47-yard touchdown for a 34-0 lead.

University was pinned deep on the ensuing kickoff, and the Dana Hills defense stuffed the Trojans’ running attack back into the endzone for a safety and a 36-0 lead.

Christian Guarascio put the icing on the game with a powerful 37-yard touchdown run with just over eight minutes remaining.