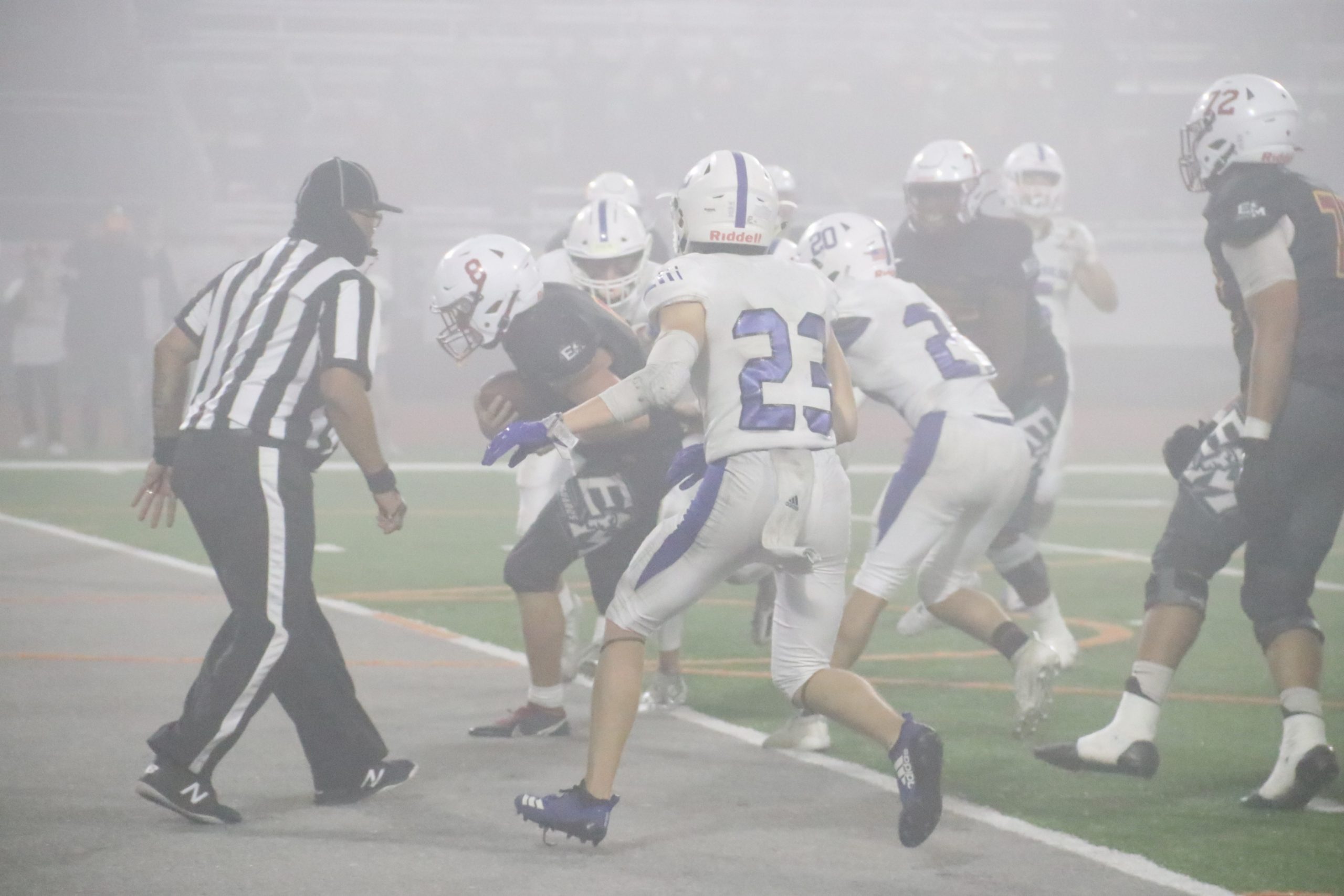 As the fog descended upon Fred Kelly Stadium, Dana Hills went blow-for-blow against a physical and tested El Modena squad. The Dolphins gave it all they had and more, but as Dana Hills’ first CIF-SS playoff game since 2013 dragged on into overtime, it was the Vanguards that emerged from the mist victorious.

Dana Hills’ defense stepped up to force a grinding game from El Modena, but despite a field goal on the Dolphins’ overtime possession, the Vanguards found the end zone to capture the win, 23-20, in a CIF-SS Division 5 first round game on Thursday, Nov. 4.

“I thought we fought like a team that belonged,” Dana Hills coach Tony Henney said. “I don’t know if you can ask for any more. Of course, you’d like to tweak a play here and try to figure out how you could’ve won it, but you’ve got to give the other team a lot of credit for winning it. I love our kids and the time we had together was really a lot of fun.”

Dana Hills (8-3) broke through some barriers for the program this season. The Dolphins got to their first CIF-SS playoff game in eight years by posting their best regular-season record since 2009 – the last year Dana Hills won a playoff game. Back then the CIF-SS divisions were still geographic and league-based, and the Dolphins played in the tough Pac-5 Division.

When the Dolphins last sniffed playoff contention in 2019, they were fighting for a spot in Division 12. This season, with the CIF-SS system now being based on calpreps.com’s computer power rankings, Dana Hills opened with a rating that would’ve put them in Division 13 at the end of the year. However, with wins over rival Aliso Niguel, dominance of Pacific Valley League opponents and a strong showing in the Pacific Hills League, Dana Hills pushed up to Division 5.

Mark that as the first major accomplishment in the Henney’s tenure as head coach. In his first season, Henney got this Dolphins’ program to set its sights higher and showed that it belonged with team’s of El Modena’s caliber.

“It was a team yearning to be coached,” Henney said. “It was a different scenario than I’ve been in. You could tell that they wanted to be good at this, and it was something that meant something to them. It was fun to be a part of this.”

While the ride through the 2021 season was fun, getting off the train this early hurt for a stellar senior class that led the Dolphins to this spot. Chief among them was senior quarterback Bo Kelly, who completed 18 of 32 passes for 327 yards and two touchdowns. Both touchdowns were thrown to senior Omarjaye Black for 68 yards and 19 yards. Black caught three passes for 84 yards.

“When you play your heart out and you have hopes for a ring, you’re going to feel down and everything,” Kelly said. “It’s my last high school football game. You’re going to be bummed out. You can’t put words to how I feel. Honestly, I think I’m more happy than sad. Coming into this program when we did, in four years, to say that we flipped around a program, I can’t really put words to that.”

It was Kelly and the Dolphins’ quick-strike offense that put Dana Hills in control in the first half, 14-10.

In the second half, it was the defenses that reigned.

El Modena had to string together a 13-play drive to get back in front, 17-14, and the Dolphins responded on the next drive to tie the score, 17-17, on a 34-yard field goal by senior Kian Afrookhteh. That was all either team would manage in the second half.

El Modena stuck to its running attack, and in the past that might’ve gotten Dana Hills, but the Dolphins met the challenge. El Modena ran the ball 51 times to gain a total of 273 yards, but Dana Hills made them earn every yard on lengthy drives. Senior Hayden Dendiu made his second of two huge defensive stops to break up an El Modena pass on fourth down in the final minute of regulation.

4TH DOWN: Dana Hills stops the El Modena drive on this Hayden Dendiu breakup. Dolphins take over on the 31, 17-17, 1:14 to go. @dhhs_athletics @hdendiu pic.twitter.com/I3WMFdMhOk

Dana Hills’ offense got stuck thanks to a physical El Modena pass rush, which forced holding calls against the Dolphins and long down-and-distances late.

“We just shot ourselves in the foot a little too often,” Henney said, “didn’t have enough time to get our playmakers the ball in certain occasions. You have to give the other team credit for that.”

In overtime, Dana Hills got hit with one more holding penalty to stall their one extra possession. The Dolphins were assessed nine penalties for 125 total yards. Afrookhteh knocked through a 26-yard field goal to put Dana Hills ahead, 20-17.

Dana Hills needed a stop to win its first playoff game since 2009, but El Modena needed just four plays to earn the win. The Vanguards stuck to the ground and rushed in a five-yard touchdown to take the game, 23-20.

In the first quarter, Kelly’s first touchdown pass to Black was a 68-yard screen pass that put the Dolphins ahead, 7-3, four plays after El Modena’s opening field goal.

The Vanguards went to their ground game to toil through a 14-play, 91-yard, seven-minute drive to retake the lead, 10-7, in the second quarter, but not for long.

On the Dolphins’ ensuing possession, Kelly extended and found senior Owen Chambers deep on a 56-yard pass, and on the next play, Kelly fired it up the middle to Black on a 19-yard touchdown pass. Dana Hills led 14-10. Chambers caught three passes for 115 yards.

Dana Hills remained in front thanks to an enormous defensive play by Dendiu. With the final seconds ticking down in the half, El Modena connected a swing pass that looked destined for the end zone, but Dendiu stonewalled the Vanguard receiver at the 1-yard line. Time kept rolling and the half ended.

Going forward, this Dolphin team may have changed the path of the Dana Hills football program. While the program needs to increase its numbers and Henney wants to see improvement in the weight room, Henney also hopes those leading Dolphins of the future take their cues from these Class of 2022 seniors.

“I also think they’re going to take away the passion that Bo, Omar, Hayden, Jagger (Wiesen) play with,” Henney said, “and try and continue that to start a real tradition of having competitive football program at Dana Hills.”