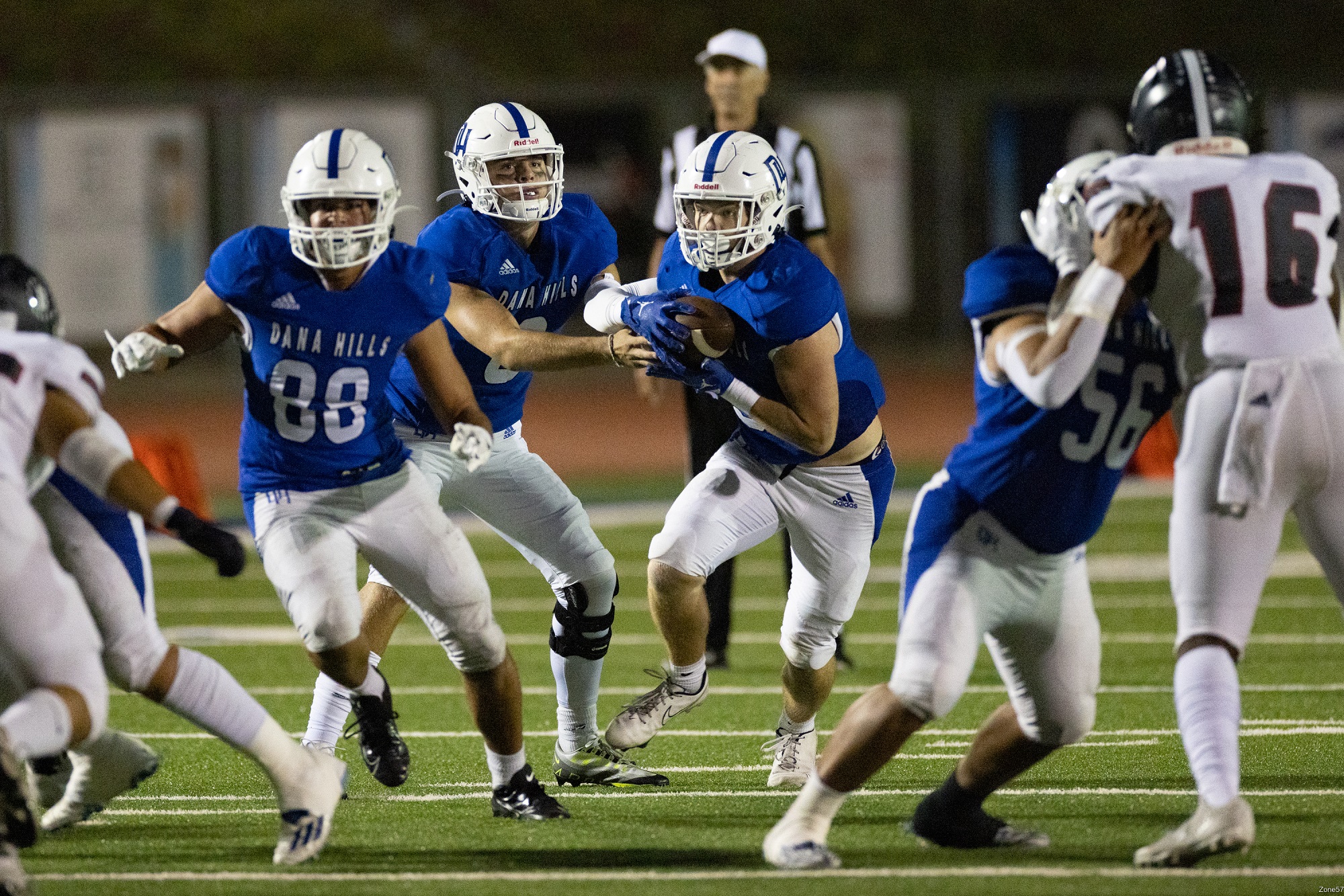 Late-breaking in the season with only a four-team league, but, finally, the Dana Hills football team turns toward Pacific Coast League play, where every game will have playoff implications.

The Dolphins (5-2) closed out their nonleague slate last Friday, Oct. 7, with another comfortable win over Pacific Hills League competition in a victory over Portola, 42-22. Junior receiver Noah Kucera caught three touchdowns in the first half with 87 yards receiving on five receptions, and senior running back Christian Guarascio put up another huge night on the ground, with 240 yards rushing and two scores on 23 carries.

Dana Hills still remains unbeaten in 10 games against the lower league of the Pacific Coast Conference since joining the grouping ahead of the 2020 season.

Dana Hills now opens the renamed Pacific Coast League on Friday, Oct. 14, at Irvine (4-3). In a scheduling quirk, all three of the Dolphins’ league games will be on the road.

As it stands, Dana Hills has the third-best record in the Pacific Coast League and is second among the league’s teams in their CIF-SS rankings by CalPreps, the computer system whose algorithm helps determine the CIF-SS playoff divisions at season’s end.

The Dolphins have maintained their explosive offensive output from a season ago, although in a much more balanced fashion.

Guarascio has been the engine for the Dolphins and is Orange County’s rushing leader by more than 300 yards, amassing 1,360 yards on 153 carries with nine touchdowns on the ground. The senior back has rushed for more than 200 yards in five of the seven games this season, including three games of 240 yards or more. The powerful and prolific running of Guarascio, who spent most of last season pass blocking with only three games topping 71 yards rushing, has been a huge and necessary revelation for Dana Hills.

That’s not to say the Dolphins haven’t been able to throw, because while his numbers are not at the record-breaking levels of Bo Kelly a year ago, senior quarterback Connor Vernon has taken on the role more than admirably, especially as his impact transfer wide receivers became eligible. Vernon has completed more than 58% of his passes for 1,267 yards and 17 touchdowns, with eight interceptions.

Early in the season, senior Blaize Bolter was Vernon’s main target, with team-highs in receptions (19) and yards (333) with four touchdown catches. However, the Dolphins’ offense has only grown more electric through the air with the arrivals of San Juan Hills transfer juniors Kucera and Chase Berry. In five games, Berry is the team’s touchdown catch leader with five scores and 257 yards on 16 receptions, and in just two games, Kucera has four touchdown receptions and 153 yards receiving on nine receptions.

Dana Hills also has the highest-rated defense among league teams by CalPreps. Senior Ethan Brougham leads the Dolphins’ defensive effort with team-highs by a wide margin in tackles (77) and solo tackles (50). Brougham is also tied for the team lead in tackles-for-loss with junior Dominic Barto, as each has five. Junior Noah Brown leads the team in sacks with three and also has one of Dana Hills’ six fumble recoveries. Kucera and juniors Luther Kingston and Cael Vincent both have an interception.

First up for Dana Hills in the Pacific Coast League is reigning league champion Irvine.

The Vaqueros are also unbeaten against Pacific Hills League competition this season, and like Dana Hills, they are bolstered by a strong running attack. Seniors Kendyn Beaver and Evan Hasegawa have split ball-carrying duties with over 500 yards each and a combined 1,081 yards on 158 carries. Beaver and Hasegawa both have four touchdown runs, as does junior quarterback Joseph Tierney, who has run for 84 yards on 22 carries. Tierney has completed 44% of his passes for 621 yards and six touchdowns with seven interceptions.

Dana Hills will also be in for a fight against undefeated Laguna Hills on Oct. 21, as the Hawks deploy senior Troy Leigber, who has 15 touchdown runs and 959 yards rushing on 100 carries. Leigber also has three touchdown catches and 225 yards receiving on 14 catches.

Reigning CIF-SS Division 11 champion Northwood, which hosts Dana Hills in the season finale, possesses the league’s top-rated offense by CalPreps. The Timberwolves, led also on the ground by senior running back Adam Harper, have scored more than 30 points in five of their seven games and topped 21 points in all seven games.

As far as the playoff races are concerned, Laguna Hills, Northwood and Dana Hills will, at minimum, be eligible for at-large selections with records of .500 or better. Irvine will need to win at least one league game to become eligible. The league champion and second-place team will earn automatic bids to the CIF-SS playoffs.

Based on the CalPreps rankings, Laguna Hills currently figures to be in either Division 7 or 8. If the season ended today, Dana Hills could slot into Division 10 or 11. However, there are plenty of points to be gained by wins or by margin of victory.

For example, Laguna Hills currently has a rating of 10.2, while Dana Hills has a rating of minus-1. An upset win for the Dolphins would be significant for the algorithm.

Additionally, CalPreps gives heavier weight to margins of victory that exceed its projections. Dana Hills is projected by CalPreps to beat Irvine (minus-4.1 rating) by one point, 28-27. If the Dolphins can beat the Vaqueros by even two touchdowns, it could again be significant for the algorithm.

Ultimately, specific division placement or computer formulas and ratings algorithms aren’t controlled by Dana Hills or any other team in the league.