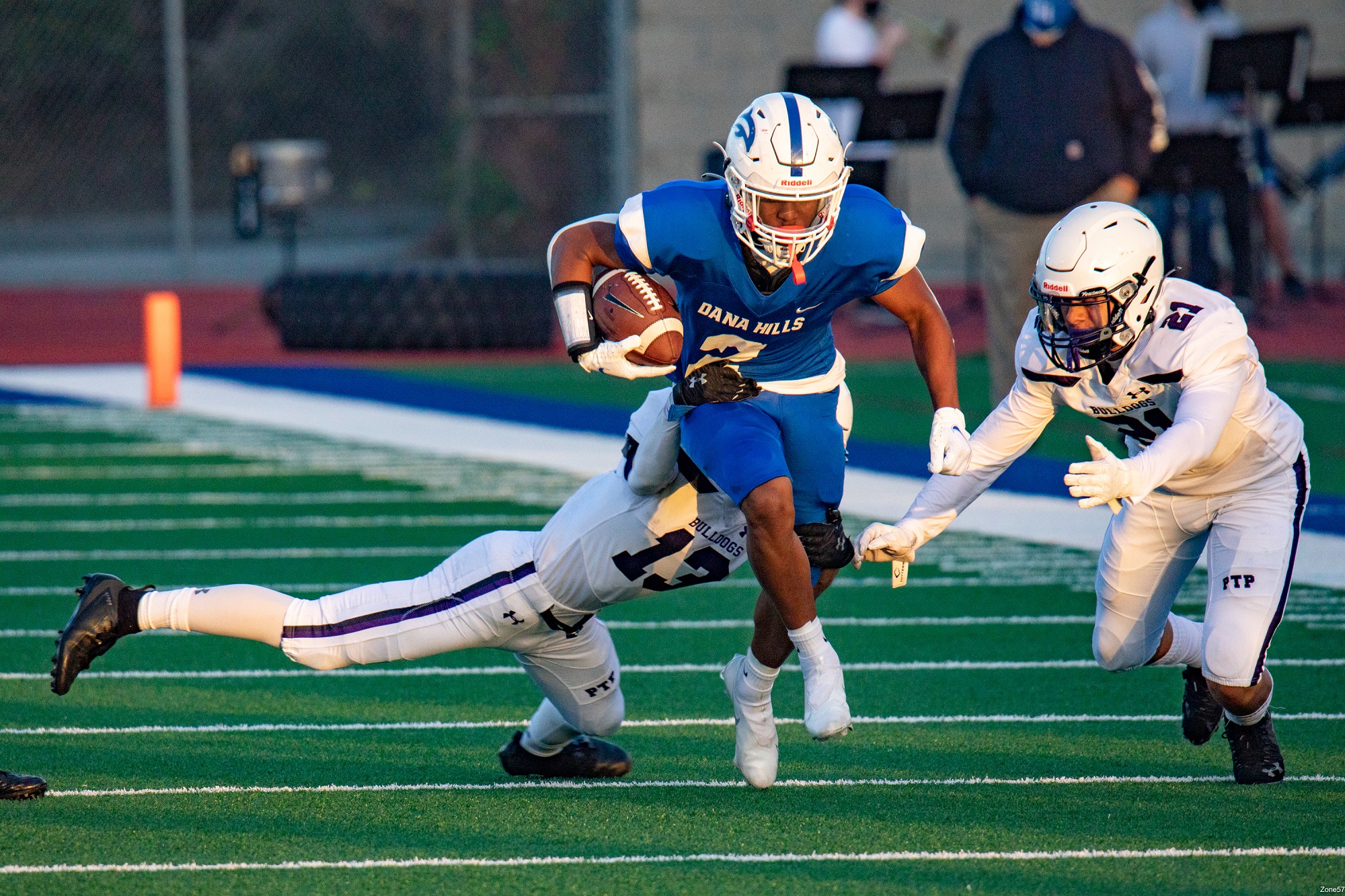 The Dana Hills football team had an opportunity within its grasp all night long.

The Dolphins’ first league title since 2012, second league title in school history and the program’s first outright league championship were all there for the taking.

However, despite all of Dana Hills’ fight, the Dolphins did themselves in one too many times on Friday, April 9.

Dana Hills clawed back from a 12-point, fourth-quarter deficit to tie Portola with under a minute to play, but in overtime, the Bulldogs scored first and held strong on a Dolphins’ fourth-down attempt to take the win, 29-26.

Dolphins go for it all on 4th and Goal from the 5, but can’t connect. Portola wins the Pacific Hills League championship.

Portola (4-1, 2-0) clinched at least a share of the inaugural Pacific Hills League championship with the win. The Bulldogs—the last Pacific Coast League champion before the league’s expansion and reorganization into the Pacific Coast Conference—can clinch the title outright on Friday, April 16, against Laguna Hills, which can also earn a share of the title with a win over Portola.

Dana Hills (4-1, 1-1), unfortunately, won’t get that second shot to claim a share of the league title, despite its own win over Laguna Hills. Because of Northwood’s cancellation of the Dolphins’ league and season finale on Friday, April 16, due to the number of injuries in Northwood’s program, Dana Hills will be unable to secure a second league victory. Instead, Dana Hills will take on Pacific Valley League champion Irvine on Friday at Irvine High School.

The Northwood cancellation became a double-edged sword for Dana Hills. If the Dolphins had won, they would’ve been outright league champions with only two league games played, but now, the Dolphins are left without the third opportunity to make up ground for a shared title.

Down 12 points in the fourth quarter, it seemed as if Dana Hills’ chance at the league title was truly slipping away, but the Dolphins didn’t go down without a fight.

Junior quarterback Bo Kelly came to life in the second half and got Dana Hills within six points on a 5-yard touchdown pass to Omarjaye Black with just under five minutes remaining in the game. The Dana Hills defense held down Portola, and the Dolphins came roaring back again. Kelly found Black for the second time on the night for a 25-yard touchdown pass to tie the game, 26-26, with 51 seconds left.

TOUCHDOWN: It’s all level. Dana Hills pushes all the way back with this 25 yard TD pass from Kelly to Black. XP is blocked. @DH_Football is tied with @PortolaFootball, 0:51 4Q. @bokellyy @omarjayeblack1 pic.twitter.com/XQZnXdE6v3

Dana Hills could have gone ahead on the extra point of that final-minute touchdown, but it was blocked.

On fourth down at the 5-yard line, Dana Hills had the choice to kick the field goal or go for it all and make history right then and there. The Dolphins stuck to their aggressive nature and went for it.

Kelly looked for Black one more time in the far right corner of the end zone, but the pass couldn’t connect. Portola earned its share of the league title, and the Dolphins lost a crucial league thriller in overtime for the second consecutive season.

Dana Hills had its chances to take the game throughout the night, but the Dolphins found themselves just off.

Portola came out running a Wing-T offense, pounded the ball on the ground and looked as if it would almost never attempt to pass the ball. Despite some yardage gains by Portola in the run game, Dana Hills seemed to contain the threat. However, as Portola heaved up desperate pass attempts for big yards, the Dolphins uncharacteristically lost their coverage a couple times, which set up the Bulldogs for scores.

TOUCHDOWN: Portola responds. After keeping it on the ground, Russell tosses one up for Olthoff who rumbles to the end zone on the 31 yard TD. 2-PT is no good. @DH_Football leads Portola, 7-6, 4:05 2Q. @PortolaFootball pic.twitter.com/PNnsY9tfgG

Portola, which had thrown for totals of 71, 17 and 41 passing yards this season, put up a season-high in the air with 123 passing yards, with seven completions on 22 attempts.

In the third quarter with Dana Hills still right there to get the lead back, the Dolphins muffed a punt return and set up Portola well into Dana Hills territory. Portola capitalized to take its first 12-point lead of the night.

In addition to the extra point missed at the end of regulation, Dana Hills also missed an extra point earlier in the fourth quarter. Either of those two points would have given the Dolphins the win and the league title.