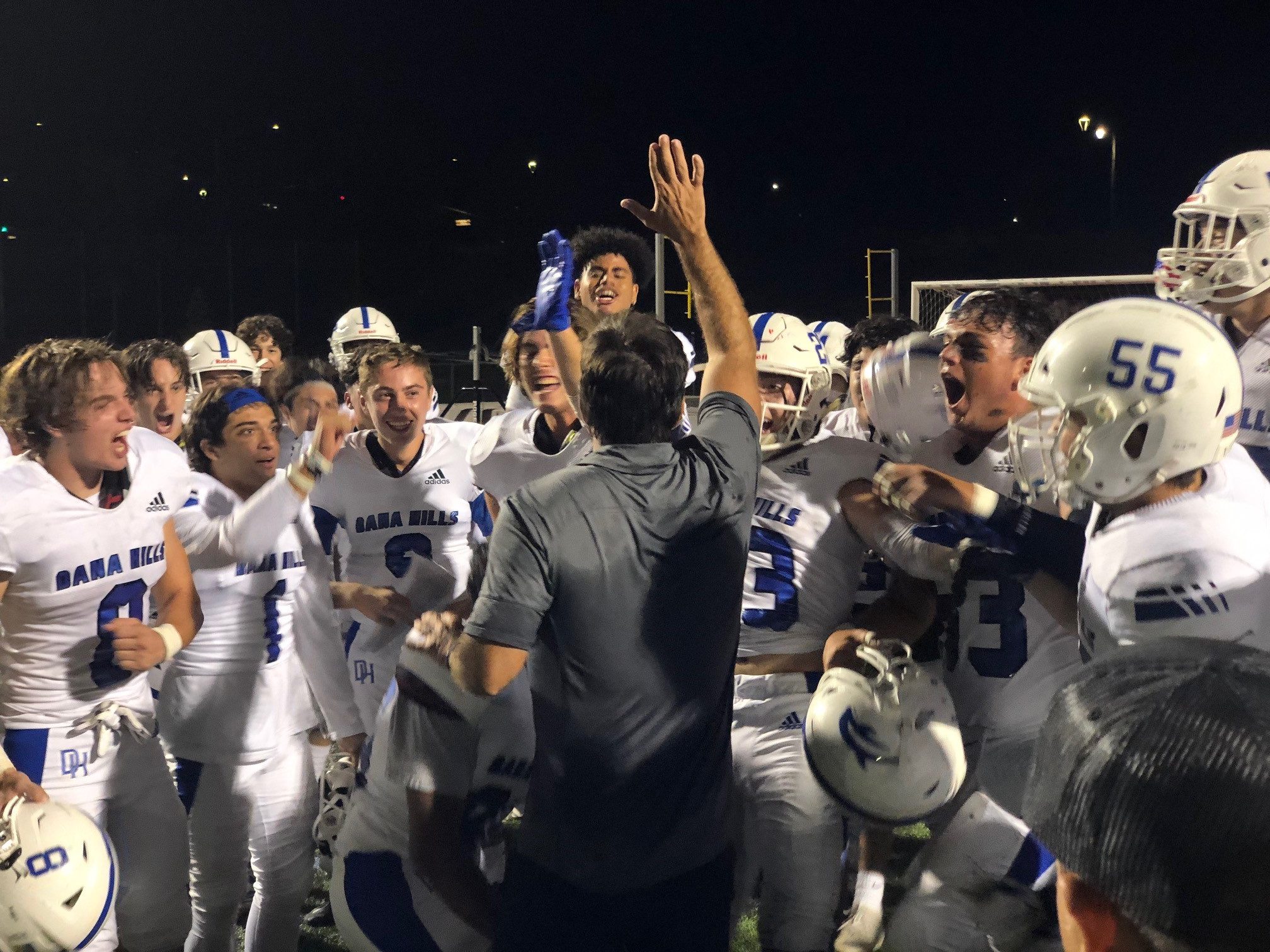 IRVINE – It’s been quite the journey through the wilderness for Dana Hills since the last time the Dolphins football team qualified for the CIF-SS playoffs.

Even when Dana Hills actually won something tangible – a share of the Dolphins’ second-ever league championship last spring – there were no playoffs due to the delayed season and the pandemic.

Now, Dana Hills has finally pushed through it all, and the Dolphins will be playing CIF-SS playoff football.

Portola battled back from a two-touchdown deficit to tie the game in the fourth quarter, but Dana Hills overcame some late penalties to pull ahead and hold on to the victory, 35-28, on Friday, Oct. 29 at Portola High School.

Dana Hills is going to the CIF-SS playoffs for the first time since 2013.

Dana Hills (8-2, 2-1) finished second in the Pacific Hills League to qualify for the CIF-SS playoffs for the first time since 2013. The Dolphins also tied their best regular-season record since 2009 – the last time Dana Hills won a playoff game.

“I think for us it’s, honestly, a sigh of relief,” Dana Hills senior quarterback Bo Kelly said. “It’s been eight years and we’ve had this goal since our freshman year. Being here all four years and always knowing our group had the talent to do it. We wouldn’t be able to get this done without the teams before us that got us to this point.”

Dana Hills won’t know its match-up or its division placement until the CIF-SS brackets are released on Sunday, Oct. 31 at 10 a.m. The Dolphins are likely to end up in Division 5 and are also likely to open with a road game next Friday, Nov. 5.

Dana Hills seniors Hayden Dendiu and Bo Kelly talk about the Dolphins making the playoffs for the first time since 2013. @dhhs_athletics @tonyhenney

For the first time, the CIF-SS playoff divisions are not being put together until after the season, as the section uses the calpreps.com power rankings to determine division placement based on current season results. Brackets will be put together based on the computer rankings, automatic qualifiers and a CIF-SS committee.

“Our kids have been through a lot this year, and I’m really proud of them,” Dana Hills coach Tony Henney said. “I told them at practice that I don’t want this to end. I don’t want them to leave this up to some committee. Let’s go get in the dance.”

Henney, who got the traditional Gatorade bath after the final whistle, picked up his 100th career win on Friday. Henney is in his first season with Dana Hills and his 13th season as a high school football head coach.

“It’s such a special deal,” Henney said. “I think I was meant to come here and meant to coach these guys, and this senior group is obviously very special. Hopefully, we can keep coaching them week after week. It’s really fun.”

Kelly is the leader of that senior group, and the signal-caller had plenty of fun on Friday night.

Kelly also threw an interception in the endzone early in the fourth quarter, and Portola capitalized on the ensuing drive with a 48-yard run by Nova Kebeli and a two-point conversion to tie the game, 28-28.

On Dana Hills’ next drive, the Dolphins got to 1st-and-26 on a holding call and another 2nd-and-27 on an intentional grounding against Kelly. However, Kelly connected with Owen Chambers to get out of the first long distance and Broghan Daley on the second. Kelly then finished the drive on a 2-yard sneak to give the Dolphins a lead, 35-28, that they wouldn’t relinquish.

TOUCHDOWN: Dana Hills back ahead. Kelly hits Daley to convert a 2nd and 27, and then Kelly pushes in the 2 yard sneak. @bokellyy @BroghanDaley

“I think we always had our eyes on the prize,” Kelly said. “Football is not always going to be up. There’s going to be ups and downs. Our defense played their (butt) off, I don’t care what anybody says.”

The defense stopped Portola (7-3, 0-3) on fourth down for the third time on that final drive of the game to close out the win. Dana Hills’ defense also finally stepped up to stop the run game.

The Dolphins had been torched on the grounds at times this year, and Portola featured a strong rushing attack. Dana Hills held the Bulldogs’ top back Kebeli to just 23 yards in the first half as the Dolphins had a 21-14 lead at halftime.

“We knew he was going to come in here and run hard, really good forward runner,” Dendiu, who also plays defense at cornerback, said. “We kept him side-to-side. Defense played good. Our linebackers and D-line came out low and strong. We’re strong, we’re good. Let’s go.”

However, the Bulldogs continued to fight and countered with one of their better passing games of the season, as quarterback Sonny Tierney threw for two touchdown passes. Once the passing game opened up, Kebeli found some lanes in the second half. Kebeli carried the ball 24 times for 172 yards and two touchdowns.

“We just didn’t capitalize on the fumble (to open the second half) and gave them some life,” Henney said. “You have to give credit to those guys (Portola). They didn’t quit. Kebeli is a hell of a back. Their quarterback played a great game. Their defense made some stops.”

Dana Hills opened its scoring with deep pass from senior receiver Omarjaye Black, who took the handoff and completed a 64-yard pass to Chambers. The Dolphins scored on a 10-play drive in the second quarter, as Kelly scrambled to his right, backwards and left before finding Christian Guarascio for a five-yard score and 14-0 lead.

Dana Hills and Portola then traded touchdown drives into halftime. Portola scored on a 38-yard pass to Dean Berger, and Dana Hills responded with a 1-yard sneak touchdown by Kelly with just over a minute to play in the half. Portola worked quick threw another touchdown, 10 yards to Adam Khan, with one second remaining for a 21-14 Dana Hills lead at the break.

Dana Hills scored quickly on its first second-half drive with a 63-yard touchdown from Kelly to Dendiu on the second play of that drive.