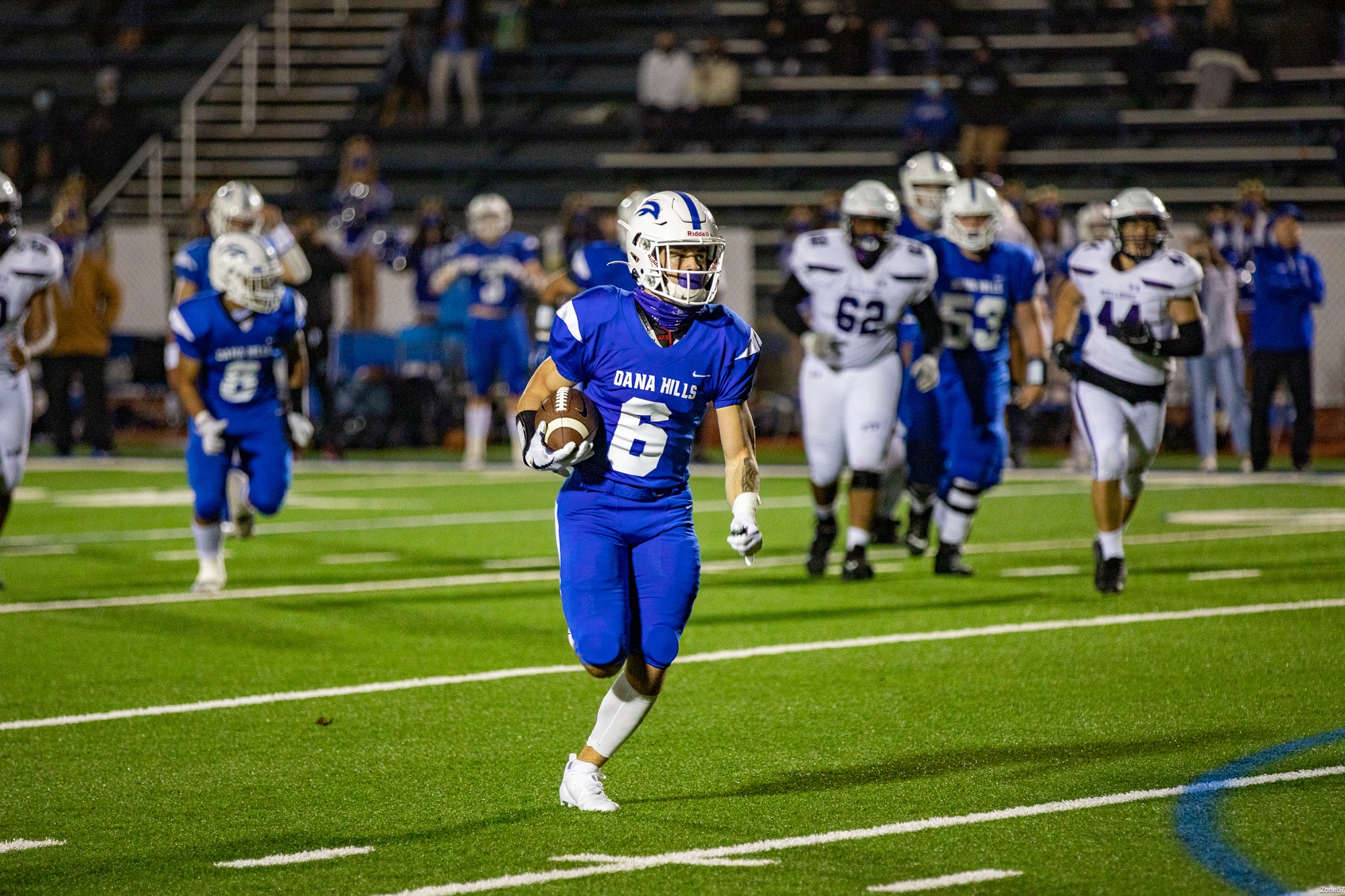 While Dana Hills dropped the opportunity to clinch its first outright league title and celebrate on its own terms when it lost to Portola on April 9, the Dolphins’ hopes for a Pacific Hills League title were not totally dashed.

As Portola still had one league game against Laguna Hills, Portola would either win the league outright with wins over Laguna Hills and Dana Hills, or Laguna Hills would set up a three-way tie for the inaugural league title.

And like everything in this newly formed league, the result was a razor-thin margin.

As Dana Hills was being edged out on the final play of a Pacific Coast Conference crossover affair by Pacific Valley League champion Irvine, 35-33, Laguna Hills put up a goal-line stand as time expired to hold off Portola, 14-10, and split the Pacific Hills League title three ways among the Dolphins, Hawks and Bulldogs.

In both teams’ league opener, Dana Hills got a goal-line stop as time expired to beat Laguna Hills. Portola’s win over Dana Hills came in overtime, with Portola stopping the Dolphins on a fourth down at the 5-yard line. Then, as mentioned, Laguna Hills also won its game over Portola with a goal-line stand.

This was the level of competitiveness Dana Hills was looking for when the football program left its longtime home of the Coast View Conference to join the Pacific Coast League, as did Laguna Hills in all sports.

The result was Dana Hills’ first league title since 2012 and the second league championship in school history.

The thin margins extended to the Dolphins’ season finale at Irvine, where the Vaqueros won on the game’s final play. On a high-lofted pass thrown from the 11-yard line into the very back of the end zone, a Vaquero wide receiver leaped above a pack of Dolphin defenders to reel in the last-second prayer and take the win, 35-33.

Trailing 14-9 at halftime, Dana Hills pushed ahead in the third quarter on a 9-yard touchdown pass from junior Bo Kelly to junior James Allemann, for a 16-14 lead.

Irvine regained the lead in the fourth quarter on a touchdown run and two-point conversion to make it 22-16, then extended the lead on an 85-yard touchdown run on the next drive for a 13-point lead, 29-16.

Dana Hills then showcased the resiliency it has demonstrated all season, as the Dolphins came right back with another 9-yard touchdown pass from Kelly to senior Nicolas Intha. Then Dana Hills’ defense got the stop, and the Dolphins marched down the field again.

With under two minutes to play, Kelly hit Intha on a 32-yard touchdown pass to tie the game, 29-29. Junior Kian Afrookhteh knocked in the extra point to put the Dolphins in front, 30-29.

On the next possession, Dana Hills stopped Irvine on fourth down, and then with 27 seconds remaining, Afrookhteh knocked through a 26-yard field goal to extend the lead, 33-29.

On the ensuing kickoff, Dana Hills got tagged for two 15-yard penalties for hitting a player while out of bounds, which set up Irvine for its final-minute magic.

In this strange, shortened and twice-delayed pandemic season, Dana Hills wrote a new page in its history. The Dolphins proved that the move to the now-Pacific Coast Conference was a move that suited them and the direction of the program.

Now that Dana Hills has some wins in its blood and young talent coming up in the wings, the Dolphins’ turnaround may be coming faster than people had anticipated.