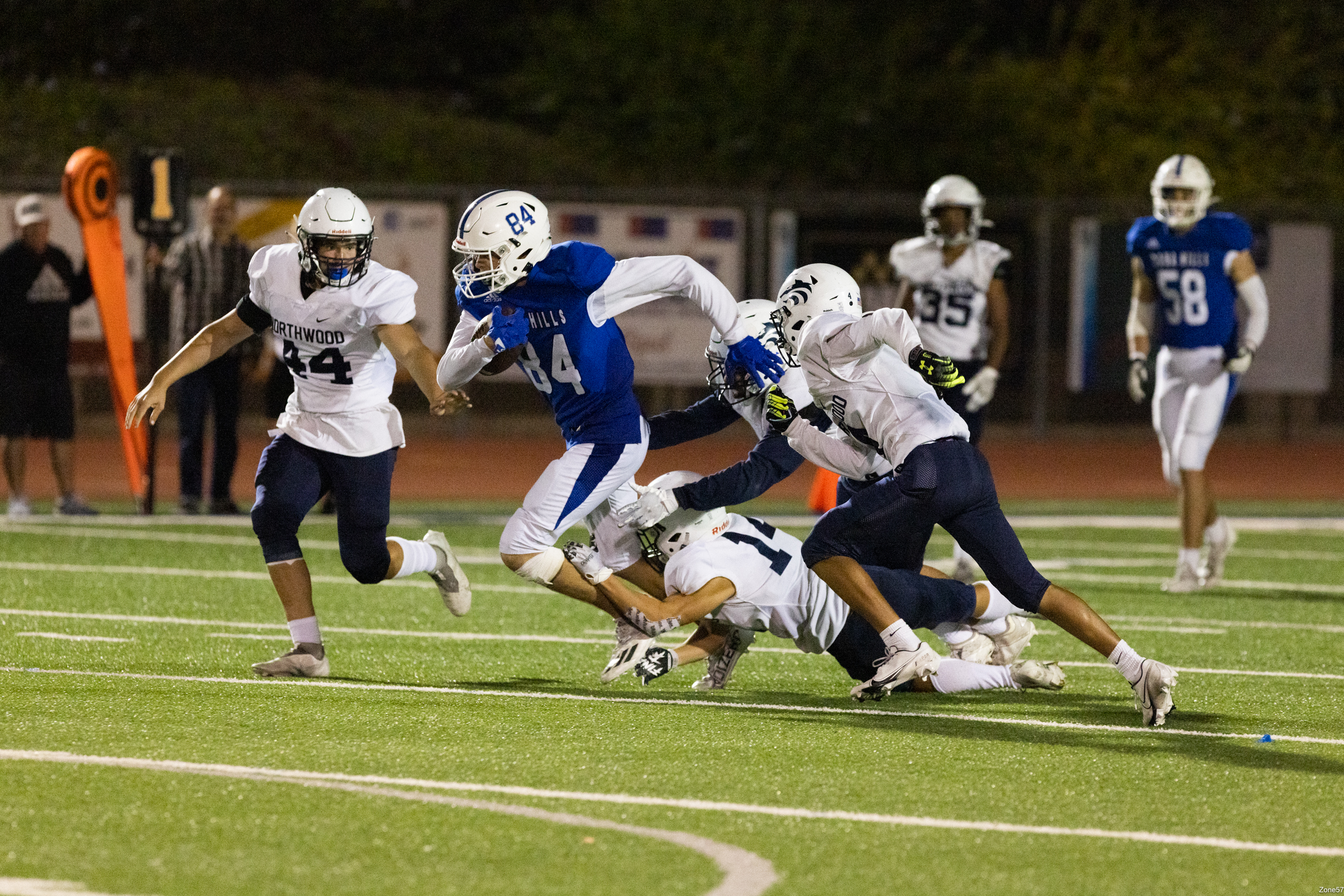 For the first time in five weeks, the Dana Hills football team was met with a true test in its Pacific Hills League opener against Irvine on Friday, Oct. 15.

Sure, Northwood gave the Dolphins some pushback the prior week in a 56-30 Dana Hills win, but since winning a final-minute, barn burner over Aliso Niguel, 29-28, on Sept. 10, Dana Hills had outscored its four Pacific Valley League opponents by 139 points. In fact, the entire Pacific Hills League had beaten up on Pacific Valley opponents in the previous weeks for a 16-0 record and a nearly 30-point average margin of victory.

Undefeated Irvine had been flying particularly high with four straight shutouts by a combined score of 164-0. Irvine had only allowed 30 points all season heading into the Pacific Hills League opener.

It was Irvine’s first true challenge of the season and a chance at revenge for Dana Hills after a last-second loss in the spring, but by the end of Friday night, the Vaqueros bested the Dolphins to prove they are very much for real.

Irvine senior running back Cameron Goods ran for 261 yards and three touchdowns on 31 carries, and the Vaqueros pulled away in the third quarter to beat Dana Hills, 47-28, at Dana Hills High School.

The last two contests between the Dolphins and Hawks have been thrillers. Last season, Dana Hills put up a game-ending, goal-line stand to win at Laguna Hills, 32-28. In 2019 at Dana Hills, the Hawks beat the Dolphins on a two-point conversion in overtime, 28-27.

This past spring, Dana Hills and Laguna Hills split the inaugural Pacific Hills League title three ways with Portola. The Dolphins had hopes of playing for the first outright league title in school history, but Irvine likely holds the destiny of the league in its own hands.

Make no mistake, Dana Hills opened last Friday’s game by doing what it’s done all season with an early quick-strike touchdown. On the first play of the game, senior quarterback Bo Kelly hit senior receiver Owen Chambers on an 80-yard catch-and-run touchdown for a 6-0 lead just 12 seconds in.

However, Dana Hills’ one major deficiency this season has been its run defense, and Irvine took advantage. The Vaqueros took the lead on a touchdown pass and two-point conversion, 8-6, and eventually led, 21-6, on touchdown runs.

However, Irvine continued to pound the rock for 19 consecutive points, including two touchdown runs by Goods and a safety from its defense. As a team, the Vaqueros ran for 316 yards.