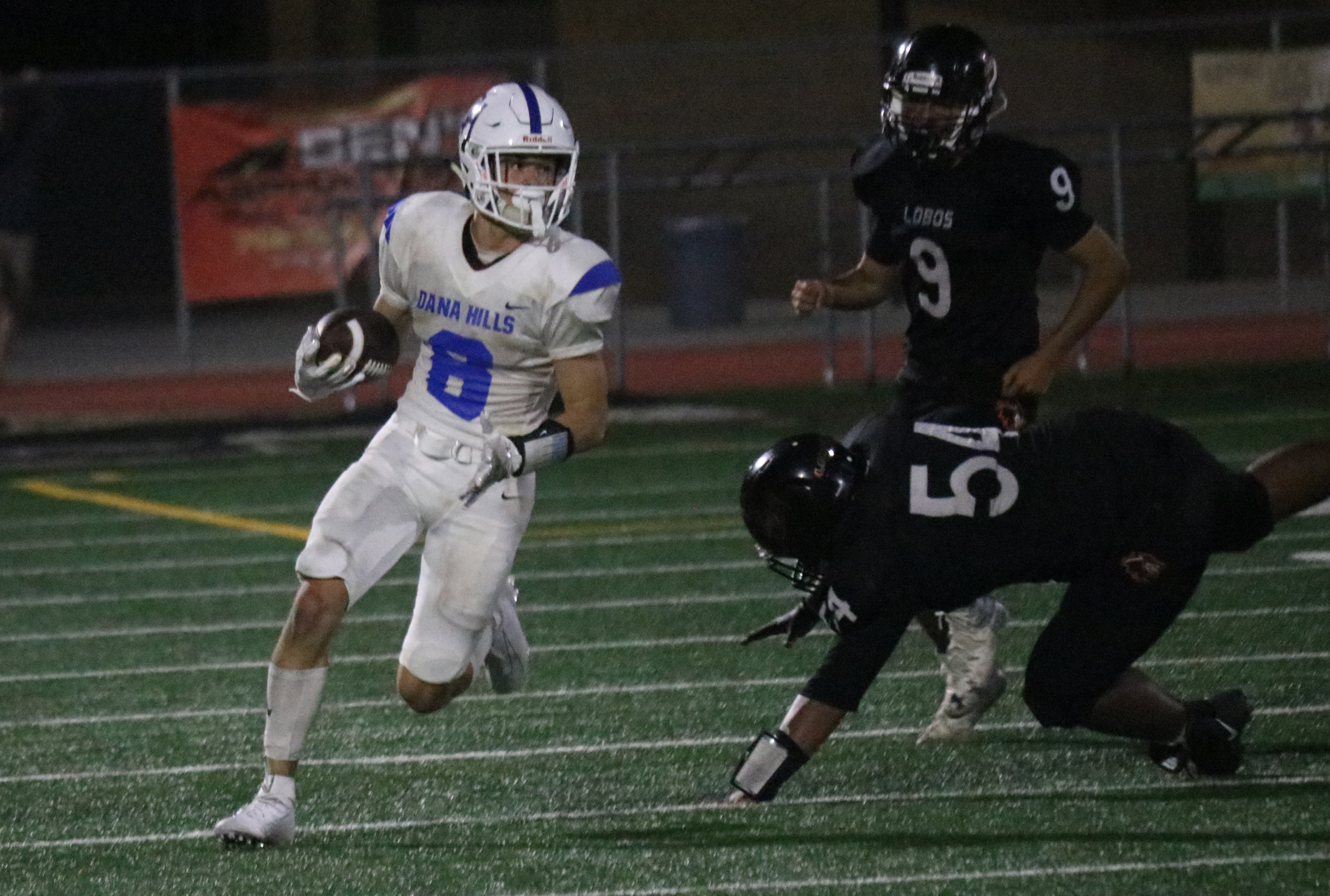 GARDEN GROVE – One week into the 2019 season, and already this Dana Hills football team has a different look to it.

The Dolphins won their first season opener since 2010 with a balanced offensive attack and a suffocating defensive effort to defeat Los Amigos, 27-7, in a nonleague game on Friday at Garden Grove High School.

“I know these kids believe,” Dana Hills coach Phil Skinner said. “You look in every one of their eyes and they understand what we’re all about. We’re not going to worry about convincing everybody else. We were done convincing last week in the scrimmage. These kids didn’t need any more convincing. They understood.”

The win also gave the Dolphins (1-0) a winning record at any point in the season for the second time in two seasons and just the second time since 2013. Dana Hills dropped the 2018 season opener to Los Amigos (0-1) by just two points and then won back-to-back games before losing the final seven games. The 2019 Dolphins are determined to not repeat that mark.

“The mindset of each player, it’s way different from last year,” Dana Hills junior Noah Simpson said. “Everybody has the mindset to compete and win each game.”

Dana Hills was led by its defensive effort. The Dolphins racked up five sacks, including two by senior Liam Boersma, an interception by senior Trevor Gartlan and a forced fumble. Gartlan, senior Aiden McGrath and junior Matt Willett also contributed with sacks.

“It was just our effort,” Boersma said about the defensive push. “The work we put in during the year really helped us improve.”

HALFTIME: Dana Hills with its second sack of the game. Liam Boersma on the stop. First half has been all Dolphins as Dana Hills leads Los Amigos, 20-0 at the half. @dana_football @DHHSOfficial @DanaPointTimes pic.twitter.com/EcHKnUFNK3

Dana Hills’ offense was balanced all night, as the defense provided the effort and field position needed for the offense to work comfortably.

Dana Hills also ran for a total of 119 yards and a touchdown.

The Dolphins came out with a quick tempo, and Gartlan landed the first strike with a 27-yard touchdown run on the opening drive of the season for a 7-0 lead.

The Dana Hills continued to stifle Los Amigos, who couldn’t find any running or passing rhythm, well into the second quarter where the Dolphins struck again.

Dana Hills finally clicks in its passing attack as Zack Saavedra hits Lukas Saavedra on this 21-yard gain, which sets up…. @dana_football pic.twitter.com/HSxyH7f6jl

Dana Hills’ passing offense hit a lull until Zackary Saavedra hit his brother junior Lukas Saavedra on back-to-back passes of 24 and 8 yards. Those passes set up Saavedra’s 3-yard TD pass to sophomore Jacob Georgia. The Dolphins missed the extra point for a 13-0 lead.

Dana Hills scored on the first play of the very next drive when Saavedra hit Simpson on the right side for a 46-yard catch-and-run touchdown. The Los Amigos defender attempted to jump the pass for an interception, but Simpson beat him for the ball and the score.

“I wasn’t running fast enough,” Simpson said, “and then he (the defender) came under it, and then I ‘Moss’d’ him (grabbing the ball over the defender like NFL Hall of Famer Randy Moss used to). I started cramping up on the way to the end zone, but I got it done.”

Simpson led all receivers with six receptions for 106 yards.

In the third quarter, Los Amigos intercepted Saavedra in the end zone to deny a Dana Hills score and set up the Lobos only scoring drive of the game.

Los Amigos was effective through the air and on screen passes to establish first-and-goal at the Dana Hills 5-yard line. The Dolphins put up a fight and pushed Los Amigos back with a third-down sack by Gartlan and a loss of 9 yards. However, on fourth down, senior Justin Boyer found senior Adolfo Chavez in the front-left corner of the end zone for an 11-yard TD pass.

Dana Hills responded on the next drive. Kelly took over at quarterback after a cramp by Saavedra, who plays both ways for the Dolphins, and hit Georgia on a 31-yard pass to jump start the drive. On the first play of the fourth quarter, Kelly hit sophomore James Allemann on the right for a 21-yard touchdown strike to reestablish the 20-point lead.

Los Amigos sprung a big run on the ensuing drive, but the Dana Hills secondary stripped the runner and recovered the fumble. From there, the Dolphins ground down the game for the win.

Next week, the Dolphins open up their home slate against Northwood on Friday, Aug. 30 at 7 p.m. Northwood (1-0) won its season-opener over Saddleback Valley Christian tonight, 54-0.