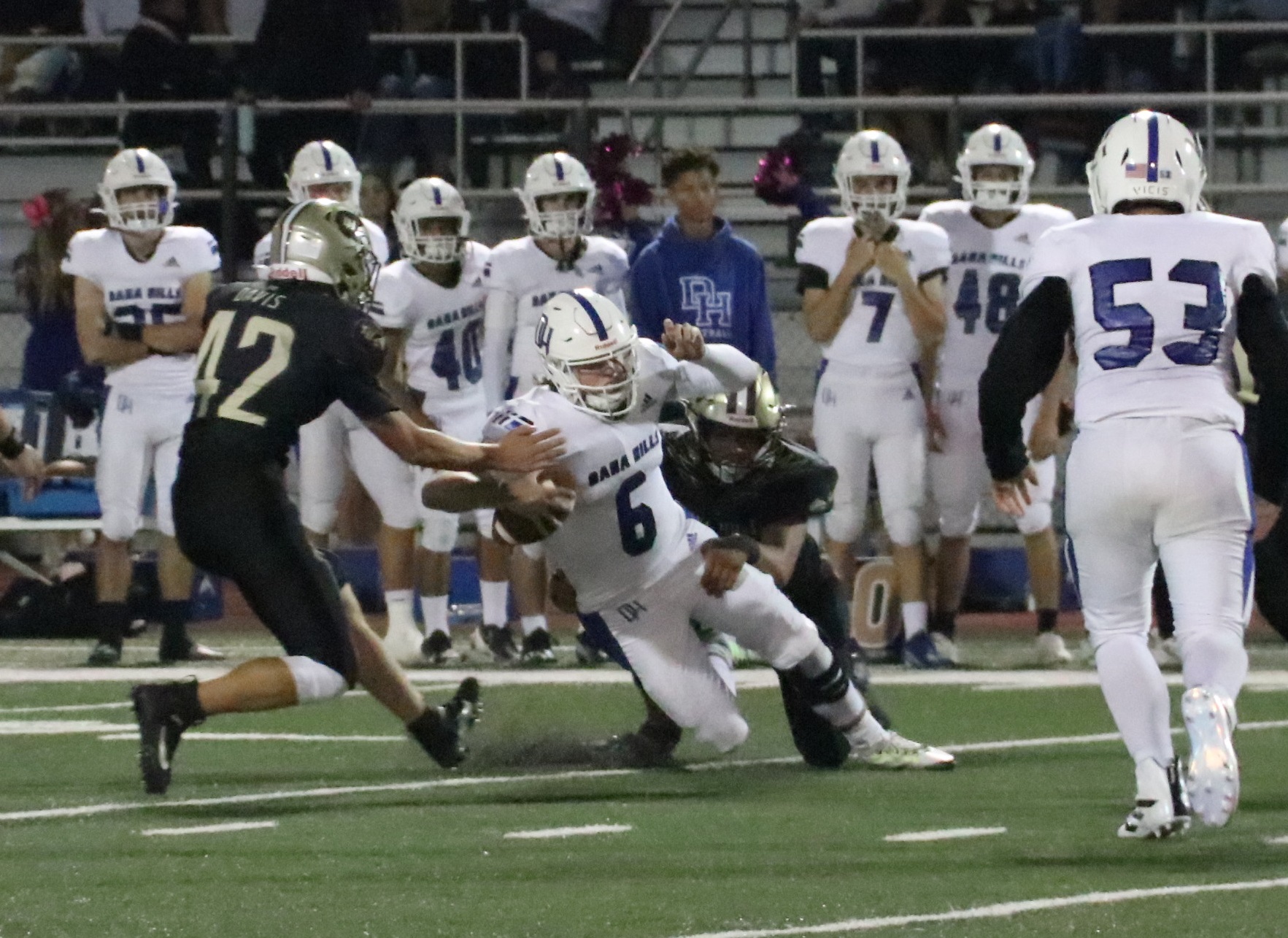 LAGUNA HILLS – The Dana Hills football team got a taste of its own medicine on Friday night with the physical rushing attack of Laguna Hills, but the Dolphins still have a shot at the Pacific Coast League title in the season finale next week.

Laguna Hills running back Troy Leigber rushed for five touchdowns and ran back a kickoff for a touchdown, as the Hawks bottled up Dana Hills, 42-21, on Friday, Oct. 21, at Laguna Hills High School.

“They’ve done it to everybody,” Dana Hills coach Tony Henney said of Laguna Hills’ run game. “We tried to stack the box. They’re 8-1 for a reason. You’ve got to give them credit. They execute their stuff at a high level. They play defense at a high level. They make plays. They didn’t give up the big plays like we’ve been having. They were deserving.”

“They’ve got to get over (this game),” Henney said of his team. “We’ve got to learn from the film, and we have to have a great week of practice. Treat it like a league championship game, because if you win you’re a co-champion.”

If Dana Hills beats Northwood, the Dolphins will be co-champions with the Timberwolves.

If Laguna Hills also beats Irvine (4-5, 0-2), there will be a three-way tie for the Pacific Coast League, with the Hawks, Dolphins and Timberwolves all sitting at 2-1.

“We wanted to be playing for a league championship in Week 10,” Laguna Hills coach John Lester said. “We need some help down the road here, but no matter what, we still have a possibility of being co-league champs going into next week.”

There is a possible danger for Dana Hills if there is a three-way split of the league title. At that point, there would be a coin flip for playoff seedings, and if the Dolphins end up as the third seed, they would not be guaranteed a playoff berth. The top two seeds from the Pacific Coast League earn automatic CIF-SS playoff spots, and the third seed would be subject to the at-large selection process.

If Dana Hills wins and Laguna Hills loses, Northwood and Dana Hills would be the top two seeds and qualify for the CIF-SS playoffs.

Dana Hills will be up against a similar challenge next week as it was on Friday night with a potent run game of a one-loss team.

For Laguna Hills, Leigber carried the ball 24 times for 228 yards and five touchdowns, and the senior added a back-breaking touchdown to open the second half with a 99-yard touchdown return for a 28-6 lead. It was Leigber’s second five-touchdown rushing performance of the season.

“Troy is our go-to guy. He did a phenomenal job,” Lester said. “He’s just a phenomenal athlete, but we’ve got a lot of guys up front that make it possible for him. Our offensive line was just fantastic tonight.”

Leigber was the No. 3 rusher in Orange County entering the night, and Dana Hills’ Christian Guarascio was the top rusher in the county.

While Guarascio scored two touchdowns – one rushing and one receiving – Laguna Hills was able to stifle the Dana Hills attack, as Guarascio’s 138 yards on 22 carries was his second-lowest rushing output of the season.

On the other side, Laguna Hills rarely got to third down. The Hawks converted three of five third-down attempts and their lone fourth-down attempt in the second half.

After Laguna Hills’ kickoff return score to open the second half, Dana Hills got back within two scores twice, but the Hawks had an answer for the Dolphins each time.

Dana Hills put the ball in Guarascio’s hands on a couple of direct snaps for a 5-yard touchdown, on which Connor Vernon hit Chase Berry on a two-point conversion to get back within 14 points, 28-14. Laguna Hills then drained the clock on an 80-yard drive with a 19-yard Leigber scoring run, 35-14.

The Dolphins struck back quick with a 35-yard touchdown strike from Vernon to Berry to pull back within 14 points going into the foruth quarter. Dana Hills got the three-and-out it needed, but Laguna Hills stood up to the test again, as Dana Hills went for it on fourth down at its own 37-yard line with just under 10 minutes remaining. The Hawks covered the pass and recovered the turnover on downs.

“I just though in order to get back into the game we needed to score,” Henney said of that fourth-down attempt. “If you make it 35-28, it’s possible that they’re going to get a little uptight watching a three-touchdown lead evaporate. I just thought that was the game right there.”

Laguna Hills made Dana Hills pay, as Leigber broke a 22-yard run and scored on a 2-yard run to close the scoring, 42-21.

Vernon completed 19 of 31 passes for 191 yards, a touchdown and an interception. Berry caught nine passes for 92 yards and a touchdown. Noah Kucera caught four passes for 48 yards. Nate Depierro, Ethan Torbert and Cooper Walsh each registered a tackle-for-loss.