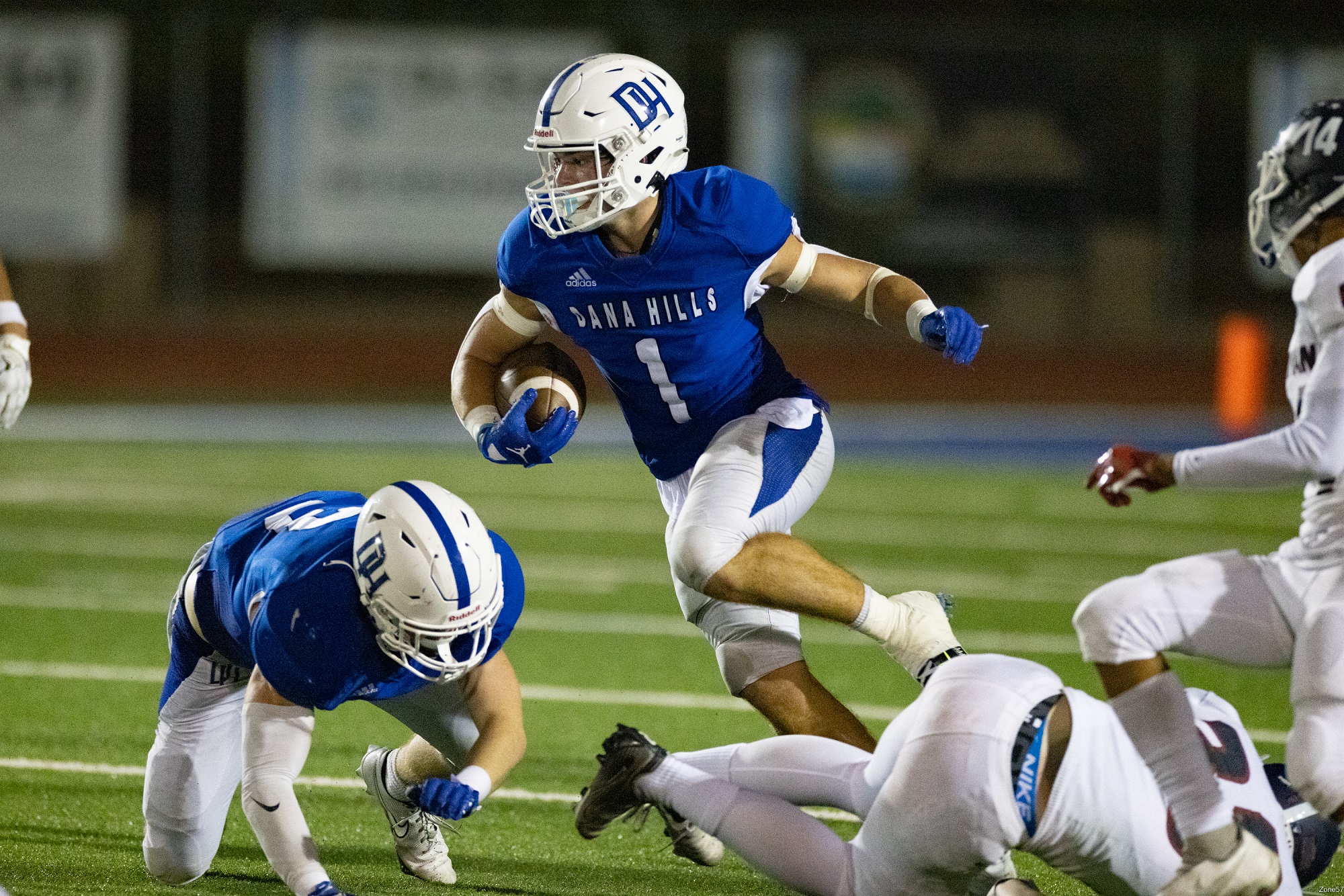 Kucera caught three first-half touchdowns, and along with fellow San Juan Hills transfer Chase Berry’s receiving score, gave the Dolphins more than enough to sit on its 35-15 lead at halftime. Guarascio finished with 23 carries for 240 yards and two touchdowns.

Berry totaled three receptions for 56 yards to go with Kucera’s five catches for 87 yards, all coming in the first 24 minutes.

Dana Hills head coach Todd Henney commented that his team’s offense had increased its explosiveness since the two wideouts joined the lineup.

“I thought the offensive line did a great job, and I thought (quarterback Connor Vernon) had great decision making,” Henney said. “We only stopped ourselves a couple of times.”

The Dolphins were charged with nine penalties for 78 yards, one of which took a 38-yard Guarascio touchdown run off the board. Regardless, the team performed well enough to win handily.

Connor Vernon started the game 7-for-7 passing for 101 yards and three touchdowns, as part of a hot start that saw the Dolphins find the end zone on five of their first six possessions.

Chunk plays put them in position for a 13-yard Guarascio run to open the scoring 42 seconds into the first quarter. Portola responded, as Guarascio’s Bulldog counterpart Marcus Sung took a handoff 10 yards to even the game, 7-7.

After Berry’s 43-yard catch-and-run put Dana Hills back on top, the offenses traded punts. Kucera restarted the Dolphins’ engine with a 21-yard run and 17-yard reception to extend the lead to 21-7.

Not to be outdone, Portola quarterack Rocky Palacio completed passes of 11, 19, and 10 yards on the ensuing drive. The last was a jump ball to receiver Rider Cooper for a score, which Palacio followed with a passing two-point conversion after a muffed point-after attempt.

The Portola quarterback would finish 16-for-25 passing for 201 yards and one score, but Henne didn’t take issue with what the defense gave up.

“We felt that running the ball was their strength, and that we were going to kind of allow them to throw the ball a little bit,” he said. “Not that you want to give up a ton of yards but (it’s) making them do something they don’t want to do.”

Kucera closed out the half with touchdown receptions of 15 and 37 yards.

Sung totaled 96 yards and two touchdowns on 21 carries and was a featured contributor on the Bulldogs’ opening possession of the third quarter. His 12-yard touchdown cut Dana Hills’ lead to 13 points, but also came as Portola had shaved seven minutes off the clock and reduced their time for a comeback.

After the Dolphins punted on their next drive, the Bulldogs’ fate was sealed.

Portola (1-6) turned the ball over on downs due to a questionable non-call of defensive pass interference, Guarascio followed with a 21-yard touchdown run, and Palacio’s final pass was intercepted with 2:26 remaining in the game.