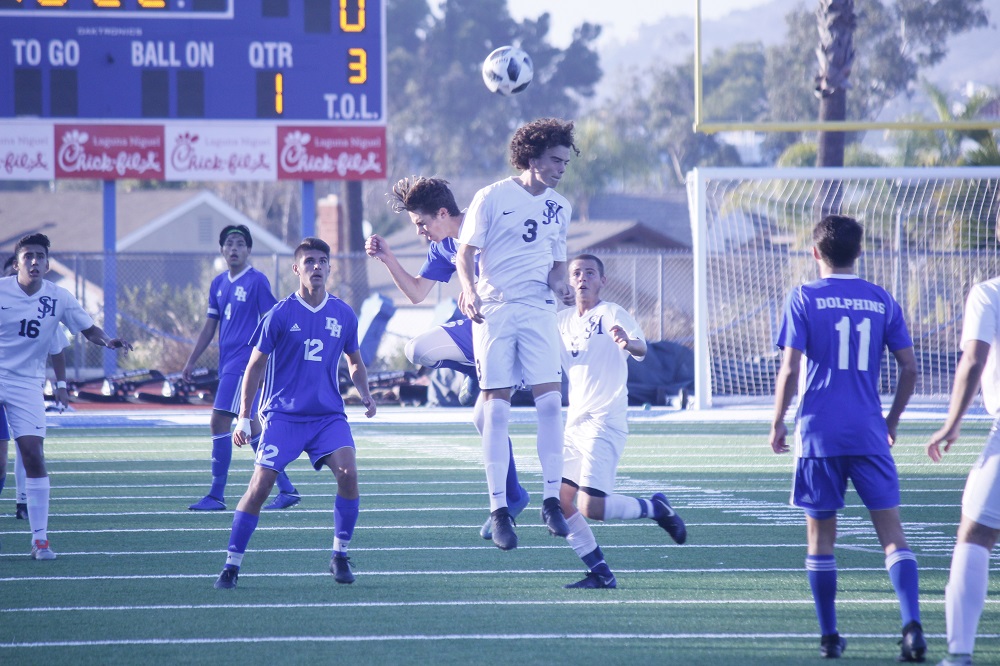 DANA POINT – Both the San Juan Hills and Dana Hills boys soccer teams have been looking to establish a consistent run of play in the early part of the season.

After a back-and-forth first half on Wednesday, it was San Juan Hills that found the extra edge to keep up the one constant between the two teams of alternating wins and losses or draws.

In a chippy local rivalry, Kevin Marin came on at halftime and struck in the 51st minute to give San Juan Hills the only goal it would need in a victory over Dana Hills, 1-0, in a nonleague match at Dana Hills High School.

Dana Hills (2-2-1) has put up a loss, win, draw, win and loss on the season, and the Dolphins have been shut out in the two losses and one draw. Dana Hills gets right back at it at home against Capistrano Valley on Friday, Dec. 14.

San Juan Hills (3-3) has flipped between losses and wins in its six games, but the Stallions have posted shutouts in their last two wins. San Juan Hills travels up Antonio Parkway to take on Santa Margarita on Friday, Dec. 14.

“Today was a big breakthrough for us,” San Juan Hills first-year coach David Nolan said. “We’ve really been trying to figure out the culture of the team, the style of play we’re looking to get out of these boys, and I feel like today we really got to know the players. We’re really trying to build something here.”

The teams exchanged chances through the majority of the first half as the teams lobbed the ball back and forth and struggled to find their finish. Dana Hills had the more dangerous of the early chances and had a soft chip around the goalkeeper swept off the San Juan Hills goal line in the 25th minute.

On the other side of halftime, San Juan Hills finally cracked a number on the scoreboard.

In the 51st minute, Ryan Berger drove along the goal line into the left side of the box. Berger kicked the ball up to the top middle where Marin stepped in to drive the shot home for the lead, 1-0.

“He’s been somewhat of a bit-part player for us,” Nolan said of Marin, “and he changed the game as far as holding the ball up. Really took on the instructions we gave at halftime, and he got his reward.”

Defensively, Daniel Fernandez Sanchez posted a scoreless first half in net for San Juan Hills, and Ustin Lopez closed out the shutout in the second half.

“The two of them have been brilliant for us,” Nolan said. “We haven’t been able to figure out who’s number one and who number two. The two of them have done the job we’ve asked of them, and that’s the way it’s going to continue until one of them separates themselves.”

For Dana Hills, Casey Burns made three saves in the scoreless first half, and Nikolas Tanski took on the goalkeeping duties in the second half.