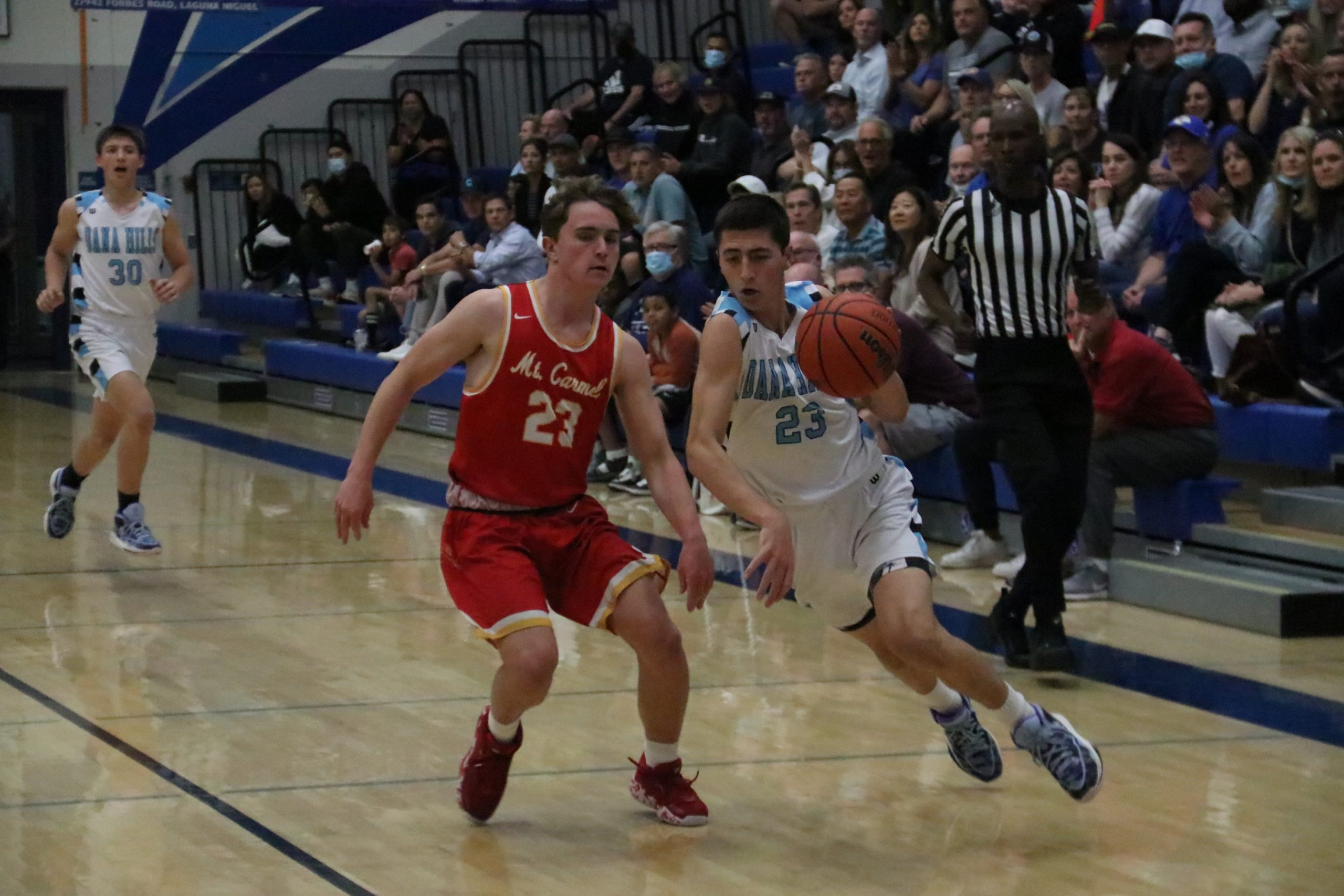 This season was nothing short of historic for the Dana Hills boys basketball program.

The Dolphins might have fallen just short of the ultimate goal, but this team will be remembered in Dana Hills history as one of its best.

Dana Hills made its first CIF-SS Final, but lost on the road in the Division 3A title game, 54-52, at Bishop Diego in Santa Barbara on Friday, Feb. 25. The Dolphins followed up with their first-ever home playoff game in the CIF State Regionals, but Dana Hills succumbed to the hot shooting of Mt. Carmel, 66-52, in a Division III first-round game on Tuesday, March 1.

“My hats off to the kids,” Dana Hills coach Tom Desiano said. “I don’t think it was really expected coming off of a 2-10 year over the last year to turn it around, make it to the CIF playoffs and CIF Finals. I have nothing but good things and good memories of this season. I’m happy.”

Dana Hills (19-11) was very strong in its nonleague schedule this season, but the Dolphins were unable to make a dent in the Sea View League. The Dolphins lost their last five games of the regular season to slide into the CIF-SS playoffs on a downturn.

However, the Dolphins still earned an at-large playoff berth and held onto the No. 3 seed in CIF-SS Division 3A. From there, the Dolphins caught fire again, with a 40-point win over San Jacinto in the first round, 73-33, and a 22-point win over Corona in the second round, 57-35. Dana Hills used a fourth-quarter surge to knock off Bishop Amat in the quarterfinals, 55-52, and then advanced to its first-ever CIF-SS Final with a win over Long Beach Millikan, 61-56, in its first semifinal since 2013.

“Just getting on that bus after we beat Millikan and going on to the finals, man, it was special,” Dana Hills senior Griffin Haugh said. “We were just throwing stuff, throwing water. It was a lot of fun.”

Haugh was the Dolphins’ leading scorer over the course of the season, and Haugh was the pace-setter for Dana Hills in the playoffs. When the Dolphins were on, Haugh usually came out hot early.

Haugh led the Dolphins with 22 points against Corona and 25 points against Long Beach Millikan with six 3-pointers. In the final, Haugh scored 14 points and his freshman brother, Collin Haugh, led Dana Hills with 16 points.

“Guys like Griff have given everything that they have to the program,” Desiano said. “He’s been a three-year varsity guy, and it’s been a great ride. He’ll be missed. He’ll go down as one of the best players to play here at Dana Hills High School, and it’s well-deserved.”

Against Bishop Diego in the Division 3A title game, Dana Hills remained close to the Cardinals through the entire game. Dana Hills led by three, 18-15, after the first quarter, but trailed at halftime, 35-31. The game was tied after three quarters, 45-45, and the game was tied into the final 90 seconds, 52-52.

Bishop Diego went ahead, 54-52, with 11 seconds remaining, and Dana Hills got a look on a potential game-winning 3-pointer. However, the shot did not fall, and the Dolphins were Division 3A runner-up.

“We were in it the whole way,” Desiano said. “We missed some critical shots down the stretch that could’ve put us ahead or tied it, but that’s basketball.”

In the CIF State Regional playoffs, Dana Hills started strong on the back of some early hot shooting by Griffin Haugh. The Dolphins led, 12-5, midway through the first quarter, with eight points by Haugh.

However, Mt. Carmel was steady from beyond the arc, and while the Sun Devils heated up themselves, the Dolphins went ice-cold. In the second quarter, Dana Hills scored in the first minute but didn’t make another field goal until the final minute of the quarter. Meanwhile, Mt. Carmel surged ahead on a 9-0 run, and led by seven points at halftime, 26-19.

A similar story happened in the third quarter, as the Dolphins just couldn’t buy a basket. Even easy lay-ups and rebound put-backs weren’t falling for Dana Hills, but Mt. Carmel stayed the course and led by 13 points after three quarters, 41-28.

“We couldn’t string together baskets, and that’s basketball,” Desiano said. “We kept them at bay, too. They’re capable of hitting seven or eight in a row. We just couldn’t hit shots.”

It was Dana Hills’ first trip to the state regionals since 2013.

Despite the finale, the Dolphins received standing ovations upon leaving the locker room from the friends and family that stuck around. They showed their appreciation for a team whose trip to the CIF-SS Final will be emblazoned in the Dana Hills gym forever.

“It was fun. I love this team so much,” Griffin Haugh said. “To say that we got up on a banner in our home gym, it’s cool.”