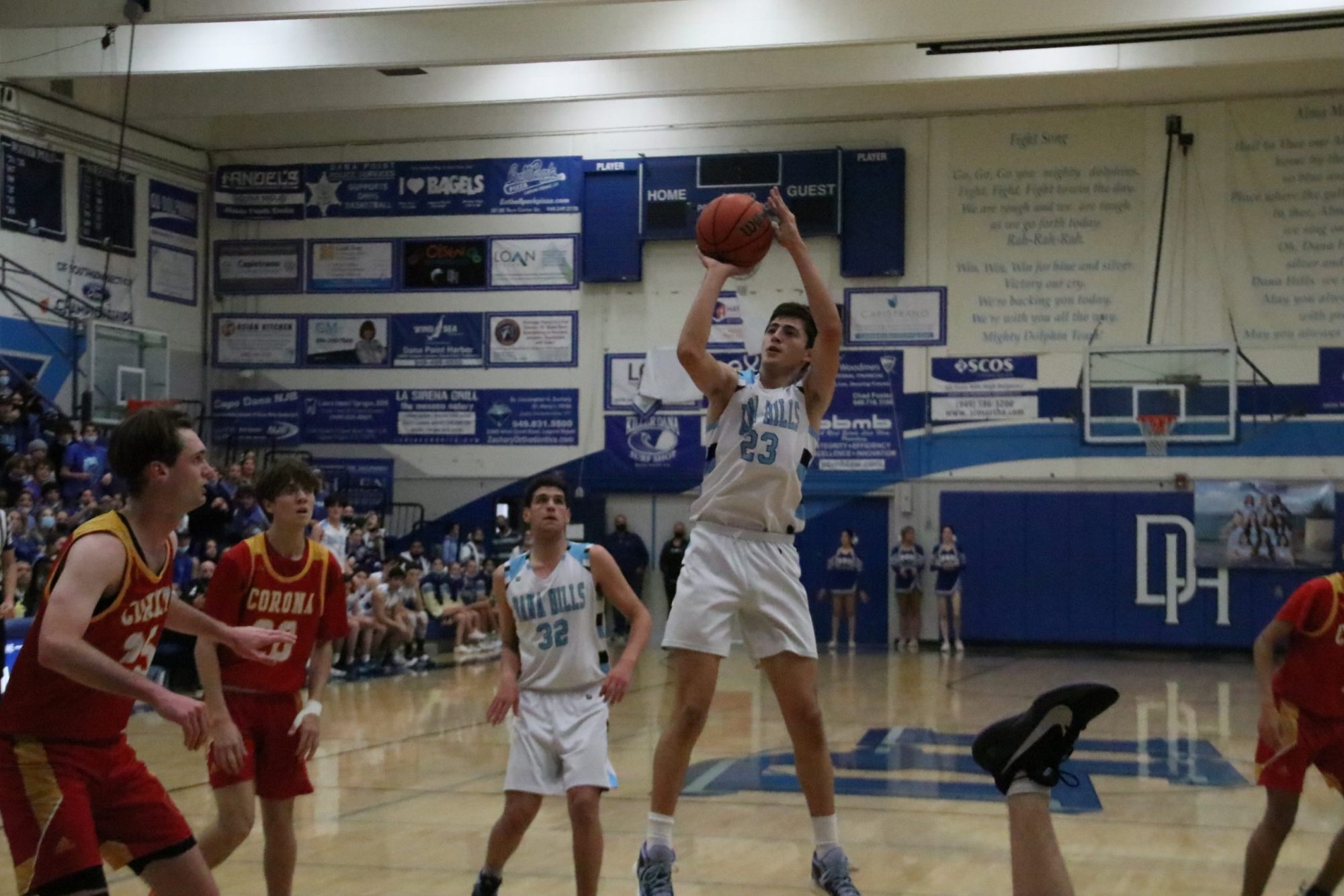 DANA POINT – After a rough end to the regular season, the Dana Hills boys basketball team has let its playoff competition know that the Dolphins are just fine, thank you.

The No. 3 seed Dolphins put up a 40-point win in the first round, and Dana Hills rolled with that momentum to another fast start and a 22-point win over Corona, 57-35, in a CIF-SS Division 3A on Tuesday, Feb. 15, at Dana Hills High School.

“I think we’re playing with some confidence,” Dana Hills coach Tom Desiano said. “We came out aggressive and hit some shots early. We rebounded the ball well. They didn’t hit a lot of shots early, but we didn’t give second and third chances.”

Dana Hills (17-9) moves on to the quarterfinals, where the Dolphins will host Bishop Amat of La Puente on Friday, Feb. 18. Bishop Amat (23-6) posted a late comeback to beat Calvary Chapel of Santa Ana, 52-49, in the second round.

Dana Hills will be looking for its first trip to the CIF-SS semifinals since 2013.

The Dolphin ended their regular season with five consecutive losses, all in Sea View League play. However, Dana Hills held on to the No. 3 seed in Division 3A, and the Dolphins have turned the page and rolled through the first two rounds.

“We knew going into league it would be very tough. (League champion) San Juan Hills is the top team in their division (Division 2A),” Desiano said. “I think that helped us, because now going into the playoffs, we can play with anybody. Playing tough teams like that, even though we didn’t get the results we wanted, we’re battle-tested. I think the kids understand that.”

On Tuesday, the Dolphins came out hot and built up a 12-4 lead in the first quarter and a 22-8 lead in the second quarter. Dana Hills was spurred on by the hot shooting of senior guard Griffin Haugh. Haugh had eight points in the first quarter and 14 of the Dolphins’ first 22 points, including three 3-pointers. Haugh finished with a team-high 22 points.

“When he gets going early, it really helps us as a team to give us confidence early,” Desiano said. “We’re all in the flow when he gets it going. We put an emphasis of finding him early, because everyone feeds off it.”

The game got tighter and chippy in the third quarter, but Dana Hills stayed the course. Senior forward Adam Pellini opened the quarter with a hammer of a slam dunk and scored the Dolphins’ first six points of the quarter. Pellini finished with 15 points.

Dana Hills led 41-28 after three quarters, and even as the Dolphins emptied the bench late in the fourth, Dana Hills closed hard with a 10-3 run for the 57-35 final score.