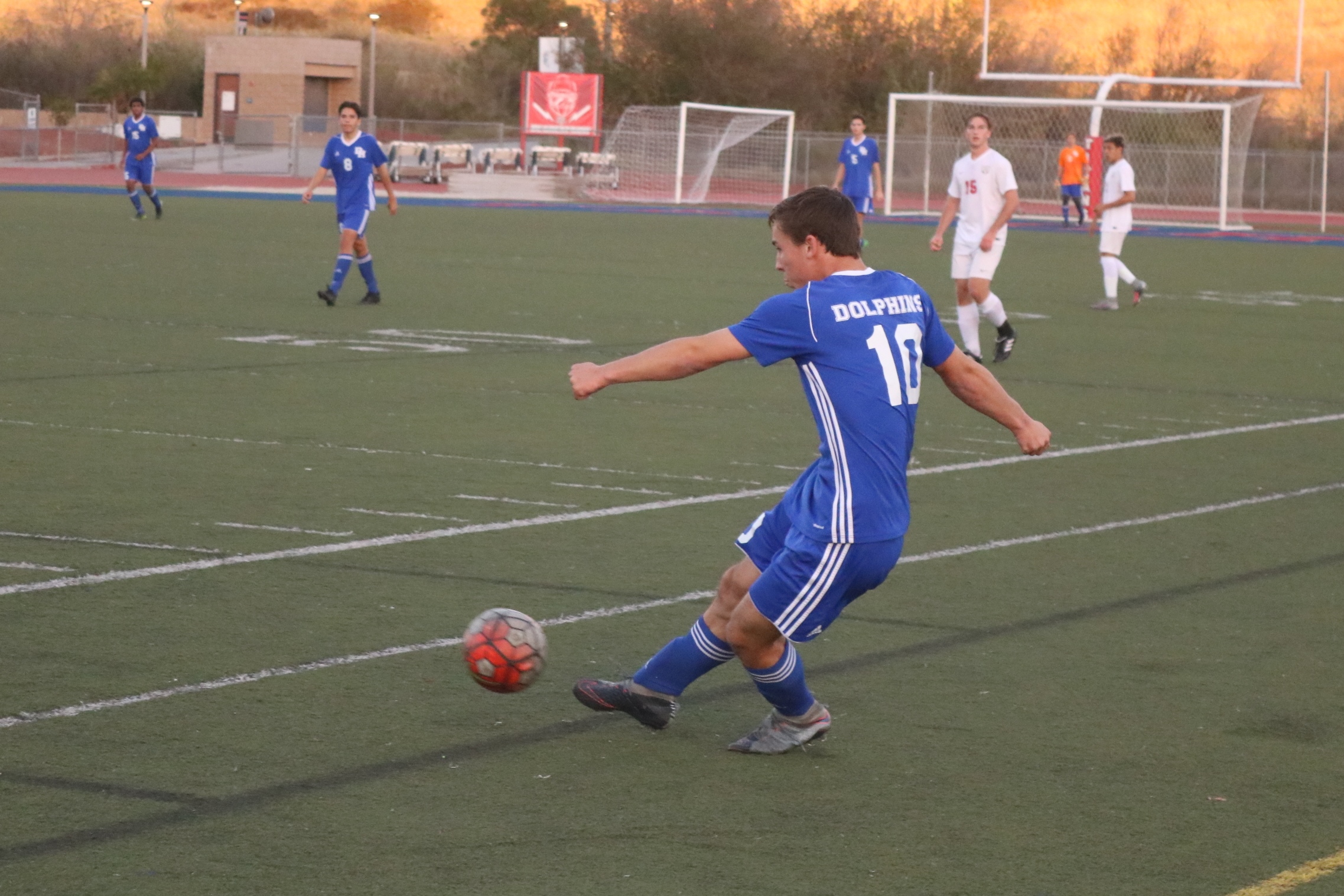 LAS FLORES – It only took six minutes for the Dana Hills boys soccer team to shellshock Tesoro en route to a victory on Tuesday.

Bobby Reynolds scored in the first minute and the sixth minute as Dana Hills went right at Tesoro to earn the victory, 3-0, in a crucial match for second place in the Sea View League.

“It’s something we’ve been working on for the last couple of weeks,” Dana Hills coach Mark Torrianni said. “Just being more positive and direct in our attack. Instead of just possessing and then trying to find our way through, we’ve just decided to up the tempo a bit and it seems to be paying off.”

Each league win is monumental for Dana Hills as the Dolphins went winless in league the last two seasons and are looking to secure their first trip to the CIF-SS playoffs since 2013.

The win was also a huge bounce back for Dana Hills after losing the home leg of this series to Tesoro, 2-1, on Jan. 22.

“We were asleep,” Torrianni said of the first meeting. “No doubt about it. The boys are realizing that their chances are slipping away and they needed to wake up. They’re waking up at the right time.”

Dana Hills was awake from the opening kickoff with a goal in the first minute.

“Right off the bat we were playing quickly,” Reynolds said. “Right to feet, moving the ball really well.”

Jared Ellis took a ball in the middle, played the ball to Parker Moore on the right and Moore sent a cross to Reynolds for the goal.

“It was a great ball by Parker,” Reynolds said. “He whipped one in and I beat my man to the near post and it just flicked it by the keeper.”

Just five minutes later, Reynolds took a give-and-go from Alex Bicknell and sent a shot straight through the goalkeeper’s legs for the two-goal advantage.

Tesoro would get some chances later in the half, but the early goals allowed Dana Hills to control the game’s tempo.

“When we’re 2-0 up, for the three mids we play with, we definitely become a lot calmer,” Kasra Diba said. “When we start out 0-0, we’re trying to go up and attack and try and score these goals. The pace of play just slows down because we realize the game is ours. It’s dictated by us.”

Dana Hills essentially put the game away early in the second half.

In the 48th minute, Bryce Allen connected with Ryan Swanson who slid the ball under the Tesoro goalie for the three-goal lead.

Dana Hills goalkeeper Joe Tonini and the Dolphins backline led by Cole Andrew and Alexis Bastida cleared away every Tesoro chance to lock down the shut out.

The Dolphins already beat Laguna Hills, 5-1, on Jan. 17 and a win on Friday would be their fourth league win on the season. Dana Hills had four league wins combined through the last four seasons.