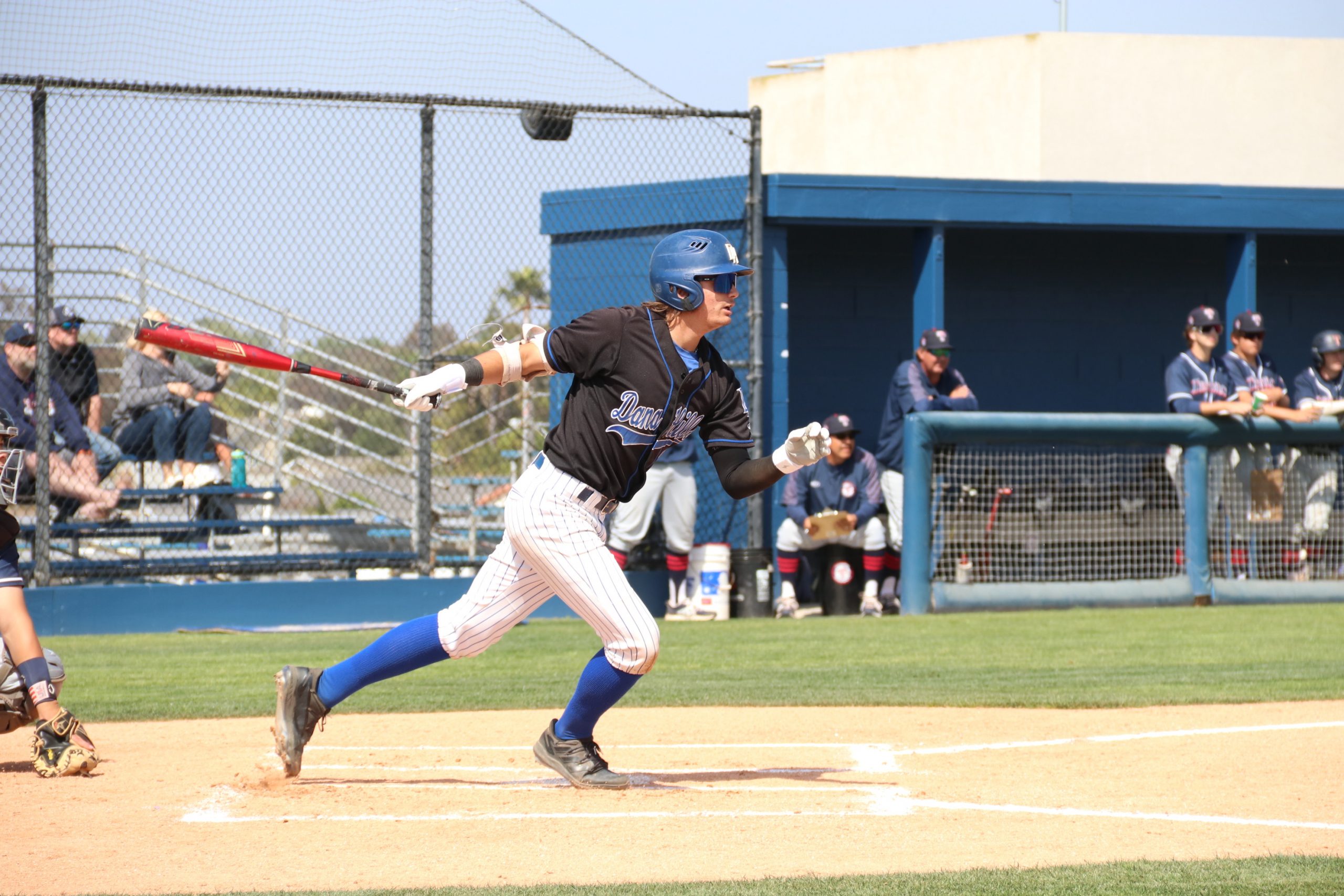 This Dana Hills baseball team could’ve packed it in a long time ago.

The Dolphins could have let the season run down after losing eight of nine games, including a three-game sweep to eventual league champion Capistrano Valley.

Dana Hills could have said, “Well, we tried” and played out the stretch after losing the first game of a de facto three-game playoff series against Tesoro on Tuesday, April 26.

The Dolphins could have seen the opportunity for a win on Wednesday, April 27, slip through their fingers as a missed squeeze bunt attempt led to a double play on the basepaths, figuring it just wasn’t going to happen for them.

But they never did, and now, Dana Hills has earned one last shot to extend its season and claim a CIF-SS playoff berth.

Immediately following the missed squeeze bunt in the fifth inning, the Dolphins batted around and scored seven runs in the sixth inning on Wednesday to come back and defeat Tesoro, 8-2, on Senior Day at Dana Hills High School.

“I’m proud of them. I’m proud of these guys for stepping up,” Dana Hills coach Tom Faris said. “They could’ve laid down and given up, and they didn’t. … We keep moving on. Playoffs are Friday.”

Tesoro (19-8, 5-6) hosts Dana Hills (10-17, 4-7) in a winner-takes-all series and season finale on Friday, April 29, for third place in the South Coast League and the league’s final guaranteed playoff berth to the CIF-SS postseason.

“Just compete and win,” Dana Hills senior first baseman Zach Leite said of Friday’s finale. “Do whatever we can to take that W.”

Dana Hills can take the resilient attitude from Wednesday for some confidence heading into Friday.

The Dolphins trailed, 2-1, into the fifth inning, where they finally got some action. Dana Hills played “small ball” with a single by senior second baseman Cade Martin, a sacrifice bunt by senior right fielder Ryan Edwards and a single by junior Kade Murray. A wild pitch moved Murray to second base, putting two runners in scoring position with only one out for the Dolphins’ leadoff hitter, senior center fielder Sebastian Moore.

Dana Hills remained committed to executing its small ball plan, but as Moore squared up for a safety-squeeze bunt attempt, disaster struck. Moore was unable to make contact with the ball, and Tesoro caught both Dana Hills runners in rundowns. The Titans executed a double play on tag-outs, and Moore was left holding the bat with nothing to show for it.

And come back he did, as Moore then led off the sixth inning with a double. Senior left fielder Jack Moulin followed up with a single, and it was off to the races after that. Leite contributed a two-run double to put Dana Hills ahead for good, 3-2.

“Coach always believes in us,” Moore said. “Just get the job done, move someone over, and then momentum keeps picking up.”

The momentum continued to roll, as senior starting pitcher Grant Faris got on with a walk, and senior third baseman Garrett Leite moved his brother, Zach, to third and Faris’ pinch runner (senior Jacob Georgia) to second base on a sacrifice bunt. Senior catcher Andrew McKeown delivered an RBI single to score Zach Leite, and Martin followed with another RBI single to score Georgia.

Edwards came through with another run-scoring single to bring McKeown’s pinch runner, senior Carson Schlereth, across the plate, and Martin came home on a sacrifice fly by Murray. Edwards scored on an error to round out the seven-run inning for the 8-2 Dana Hills advantage.

Junior right-hander Andrew Nesson earned the win by coming on in relief in the top of the sixth inning and didn’t allow a hit in his two innings of work to close out the game.

Dana Hills shot itself in the foot more than once leading up to that sixth-inning rally.

The Dolphins actually started out with some confidence in the first inning, as Moore led off with a double and scored on a groundout by Faris for the 1-0 lead.

Faris also did his part on the mound. The Washington State-bound starter went five innings with no earned runs allowed on three hits, with three walks and two strikeouts.

However, Faris ended up leaving the mound without the lead.

Tesoro tied the game in the third inning with a pair of two-out singles and an error that scored the tying run. The Titans then took the lead in the fourth inning without registering a hit. Faris issued two walks, and a bobbled ball at second base allowed a runner to score and put Tesoro up, 2-1.

“We can’t get that kid a win no matter what we do,” Tom Faris, Grant’s father, said. “It’s always just something. I think there was maybe one ball that was hit decent off him today.”

If Dana Hills can win on Friday, the Dolphins will have a spot in the CIF-SS Division 1 playoffs.

CIF-SS brackets will be revealed on Monday, May 2. Wild-card games in Division 1 are on Wednesday, May 4, and the first round is on Friday, May 6.