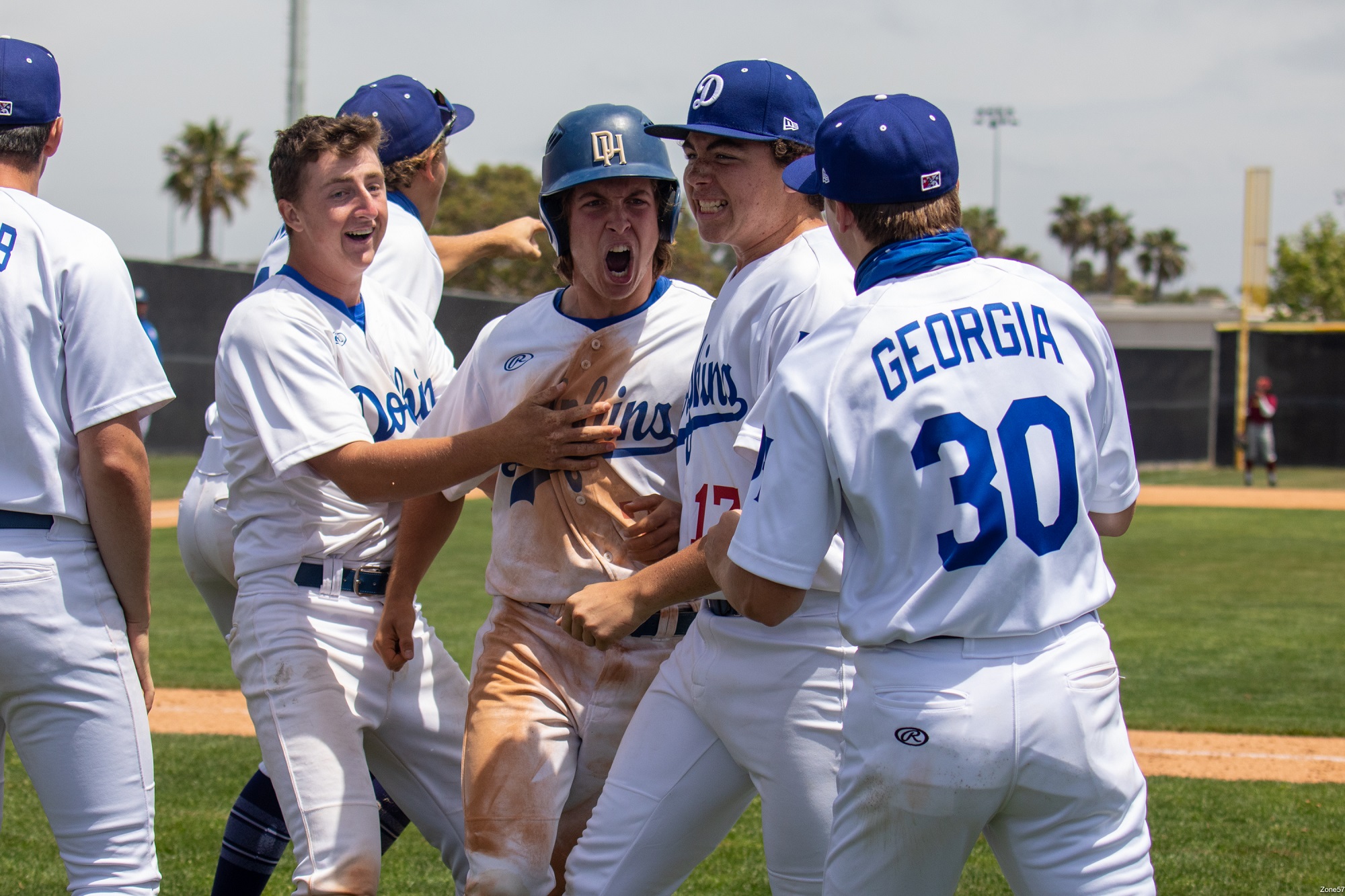 The Dana Hills baseball team had opened its season in dominant fashion.

The Dolphins won their first eight games and followed their first loss with another five-game winning streak to take 13 of their first 14 games. Then, a snag, as Dana Hills took some injuries to its top pitchers and lost three consecutive tight games: two one-run games and an extra-inning contest.

One of those one-run losses was its league opener to Capistrano Valley, 4-3, on Tuesday, May 4.

While Capistrano Valley is a perennial league contender and the top challenger for the Dolphins for the crown this season, Dana Hills, the highest-ranked team in the league at No. 8 in CIF-SS Division 1, needed to get back on track to avoid a continued downturn.

Dana Hills got its much-needed remedy on Wednesday, May 5.

The Dolphins got a strong, five-inning start from junior Grant Faris, a solid sixth inning from senior AJ Newcomb and a strike-out-the-side save from sophomore Kade Murray in the seventh to hold off Capistrano Valley, 2-1.

Capistrano Valley (12-8, 4-1) still leads the South Coast League with a sweep of El Toro last week, but Dana Hills (14-4, 1-1) can gain an important edge in the league title race with a win in the series finale on Friday, May 7, at Capistrano Valley High School.

With UC Berkeley-bound Ian May and Washington State-signed CJ Zwahlen suffering significant injuries, the Dolphins have needed other arms to step up on the mound this season.

Junior Bo Kelly, who split time as the quarterback for the Dana Hills football team the first half of the season, leads the pitching staff in wins with four, ahead of May’s three and two each from Newcomb and junior Evin Hollandsworth. Hollandsworth leads the staff with 10 appearances, seven starts and a 1.57 ERA. Kelly is second in appearances with nine and a 2.27 ERA.

Coming into Wednesday, Grant Faris, the son of Dolphins coach Tom Faris, had an 0-1 record with a 4.59 ERA in six appearances with one start. However, none of that mattered when he came up against the Cougars.

Faris allowed only three hits and one run, with four strikeouts over five innings, to earn the win for the Dolphins. Newcomb struck out one in his scoreless inning of work and, as mentioned, Murray picked up three strikeouts in the seventh to close out the victory.

Offensively, Dana Hills got all it needed on four hits to score two runs, and again, it was Faris providing the spark.

Faris’ RBI double scored senior Kanoa Perman for the first run of the game in the second inning. After advancing on a sacrifice bunt, Faris came sprinting home to score on a safety squeeze bunt by Colin Macy, which put Dana Hills up, 2-0.

Dana Hills will look to win the series on Friday, May 7, and will take on El Toro for a three-game set next week on Tuesday, May 11, at home; Wednesday, May 12, at El Toro; and Friday, May 14, back at Dana Hills.

The Dolphins then take on Tesoro for a three-game set with two at Dana Hills, and close out the season with three games against Mission Viejo, including two on the road.