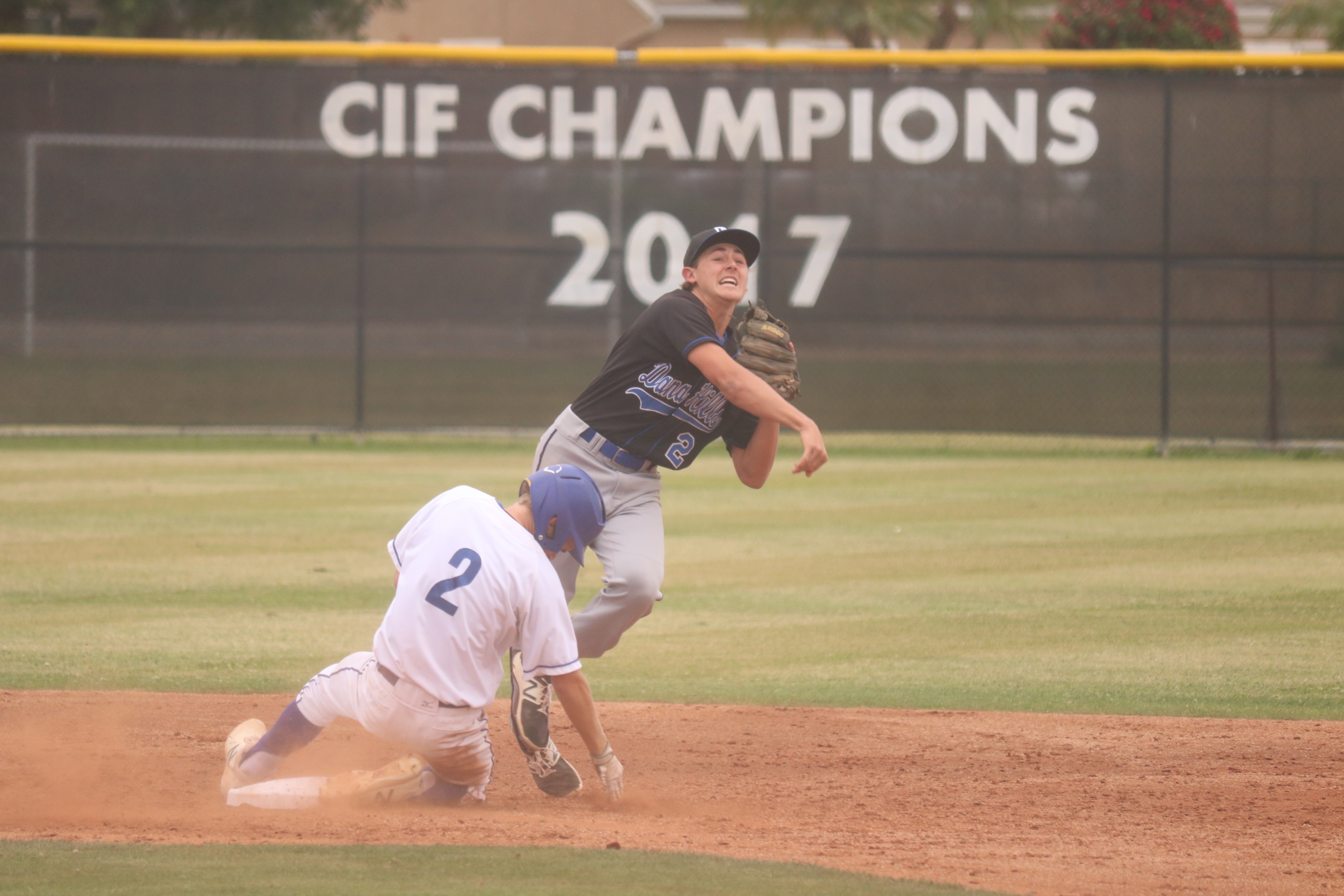 Dana Hills Baseball Battles, But Falls to El Toro in First Round

The Dolphins earned a tough draw in CIF-SS Division 1 against defending Division 1 champion El Toro, but that didn’t stop Dana Hills from drawing first blood. El Toro would get the better of Dana Hills on Friday, but the Dolphins made the Chargers earn it.

El Toro answered Dana Hills’ run in the top of the third with three runs in the bottom of the third and held off the Dolphins in the fourth and seventh innings to take the win, 3-1, in a CIF-SS Division 1 first-round game at El Toro High School.

“The way they competed at the end especially,” Dana Hills coach Tom Faris said of the Dolphins’ effort. “Two outs, you get a couple base hits, we get one to maybe come through right there, you never know. They competed really well. I’m really proud.”

It won’t be the last this young Dana Hills group sees of El Toro. After two straight second-place finishes in the Sea View League, Dana Hills moves up to the South Coast League next season where El Toro is the reigning league champion.

“It’s going to be great playing El Toro three times next year,” Faris said. “I’m excited about that. All these young guys are here, they’re going to remember this moment and it’s going to give them incentive.”

Dana Hills squared off with El Toro’s ace pitcher, Erik Tolman. The hard-throwing lefty has intimidating stuff as his fastball knocked the glove off his own catcher’s hand in the first inning.

Tolman struck out three of the first four Dana Hills batters, but the Dolphins found a way through in the third inning.

Senior Corey Cisowski banged a lead-off double and got to third on a sacrifice bunt by freshman CJ Zwahlen. Sophomore Ethan Ezor laced a one-out single that scored Cisowski for the opening lead.

“That’s what you need to do against a good pitcher,” Faris said. “You’ve got to be the team to punch first.”

In the bottom of the third, El Toro struck back quickly.

Tolman was hit by a pitch and Chase Luttrell earned a walk to lead off the inning. After a strikeout, Tolman scored on a wild pitch to tie the game. El Toro followed with back-to-back RBI singles to push out to the 3-1 lead.

In the top of the fourth, Dana Hills had a chance to cut the lead with three straight baserunners.

Senior Jack Cullen led off with a single, but he was tagged out as El Toro attempted to turn the double play. Senior Shane Ferrari beat the throw but was also tagged out on another double play attempt. This time, sophomore Thomas Buckanavage reached first safely but was picked off by Tolman to end the inning.

Dana Hills held El Toro off the board in the fourth, fifth and sixth innings. The Dolphins stranded nine El Toro base runners in the game.

In the seventh inning as the Dolphins were pushed to their final out, Dana Hills did not go quietly.

Junior Logan Gallina reached on a single, and senior Ryan Swanson used his speed for an infield single.

However, El Toro got the force play at third on the next at-bat to end the game.