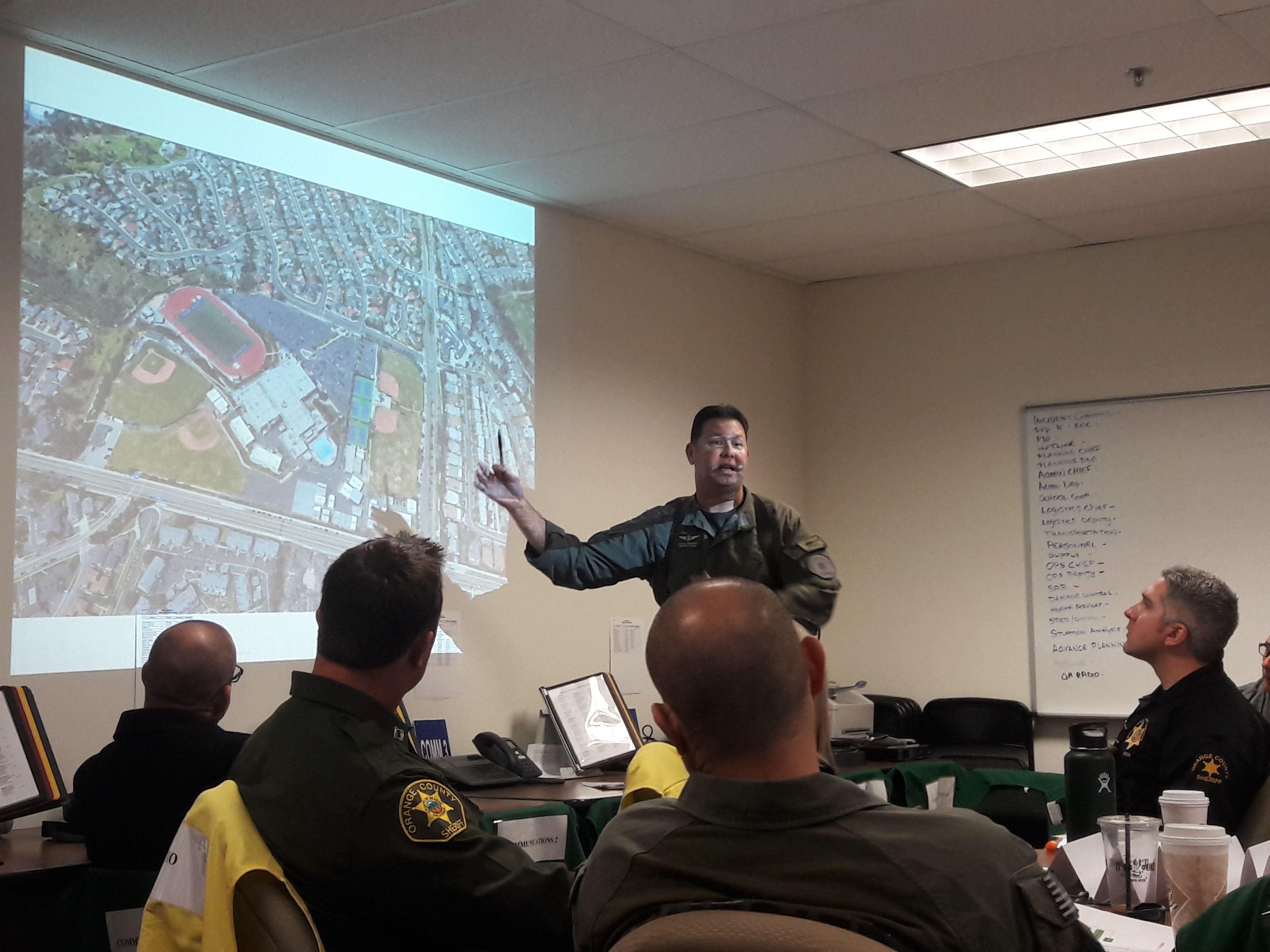 As students prepare for the nationwide walk-out, local officials discuss school safety procedures in the event of a shooting

EDITOR’S NOTE: The following is a fabricated scenario given to law enforcement, school and Dana Point city officials for a school safety drill:

It’s 7:50 a.m. on Friday, April 20 and students are rushing into the Dana Hills High School office reporting that gunshots were heard from the east area of the campus. A campus supervisor radios that there is someone shooting a rifle from the roof by the tennis courts toward people in the parking lot and at the street. The campus supervisor also reports that multiple cars have collided on the corner of Acapulco Drive and Golden Lantern.

Within minutes, students are fleeing the mall area and taking sanctuary in the office, due to shots being fired in the mall area of the school. There are reports that numerous students have been shot. After the initial shooting, the shooting stops.

This is the frightening scenario that the Orange County Sheriff’s Department (OCSD), Capistrano Unified School District (CUSD) and the city of Dana Point are using as an example on how to respond to a campus emergency such as a school shooting. The scenario exercise was planned before the Parkland, Florida shooting on Feb. 14 that left 17 people dead.

Although this scenario of a school shooting at Dana Hills is fictional, it is a fear that has besieged student’s minds nationwide.

“Whenever I’m in class, I’ll be zoning out, and I’ll catch myself thinking about what I would do if a shooter came in, like where I would hide,” Olivia Fu, a senior at San Juan Hills High School (SJHHS), said. “It’s a very real threat that I realized became normalized when it shouldn’t be—it’s serious and very relevant to us, it’s not an abstract idea.”

Fears and frustrations of students such as Fu have prompted a nationwide, student walk-out set for Wednesday, March 14 to protest gun violence. Students in South Orange County, including Dana Hills and SJHHS, plan to take part.

Although the SJHHS walk-out will remain on school campus, some 560 students are planning to participate and Fu expects more will join. Fu, 18, said that though many walk-outs are pushing for a specific gun-related policy, the walk-out at SJHHS is intended to be a non-partisan demonstration.

“There needs to be some sort of change, we’re just not specifying what that policy change should be,” Fu said. “We’re really trying to make our voices heard, we may be young but we’re powerful. A lot of us can vote and students are a real force.”

Students from nearby high schools in CUSD are making a coalition of walk-out organizers, in hopes of keeping the momentum.

Some of these walkout coalition students include Olivia Drury and Maddie Grimes, both juniors at Dana Hills, who are organizing their school’s walkout.

“We want victims to feel supported. This is all about promoting our main initiatives which are school safety and gun violence prevention. I don’t know too many people against that,” Drury said.

The Dana Hills walk-out is expected to draw hundreds of students and to take place in-between classes on school grounds. Students will gather to honor the Parkland, Florida victims, in addition to every victim of every school gun-violence incident.

Dana Point Chief of Police Services Lt. Russ Chilton spoke with Drury and Grimes prior to the walk-out about making that impact.

Chilton said that his informal sit-down with the Dana Hills juniors was focused on their concerns about safety as well as discussing the lasting impact of their efforts. In a culture of rapidly decreasing attention spans, Chilton encouraged Drury and Grimes to become a part of the civic process and enable their work to have a truly lasting impact.

In accordance with state law, CUSD will not discipline students who choose to assemble, provided they adhere to district and school guidelines including, but not limited to: all activities must be peaceful and respectful, and at no time may students leave the campus, CUSD Chief Communications Officer Ryan Burris said in an email on March 6 to district staff, families and students.

“While CUSD supports the rights of our students to express their beliefs under the state and federal First Amendment rights, as a district we are not sponsoring or advocating any participation in demonstrations,” Burris said in the email.

Drury and Grimes voiced that they feel their schools are safe and they feel supported by the district, but the walk-outs are symbolic of taking responsibility for their own safety and ensuring the protection of what Grimes called an “essential experience of your youth.”

“School is something you need to do to grow, and we want to ensure we feel safe (getting our education), and that our leaders know how important this is to us,” Grimes said.

“The relationship between the school sites and (OCSD) is incredible,” CUSD Chief Communications Officer Ryan Burris said. “Each school resource officer knows every inch of the campus, they know each of our principals.”

For nearly three hours, the exercise went over how procedures would play out in real time, Burris said.

“One hundred percent of the time there’s always something to learn and to take away,” Burris said. “This time there was a lot of discussion of what reunification of students and parents would look like, which is helpful if you have a situation where you’re evacuating kids to a different site.”

The scenario contains details of the amount of victims and first responder replies, the details of the suspects and the OCSD’s findings of an early investigation.

“Through that engagement and dialogue, we can assist each other in seeing the strengths and weaknesses (in our plans), what to reinforce and what to make better,” Burris said.

The task force is still in the process of being formed, Burris said.

“This is a crisis from a lot of different expert’s perspectives and we will be building engagement in discussion on our mental health: social and emotional,” Burris said. “And, how to increase capacity for that stuff—we spend nearly $4 million a year for support in our schools and it’s not enough.”

At the next CUSD board meeting at 7 p.m. on Wednesday, March 14, there will be a presentation on school safety at the CUSD office at 33122 Valle Road, San Juan Capistrano.