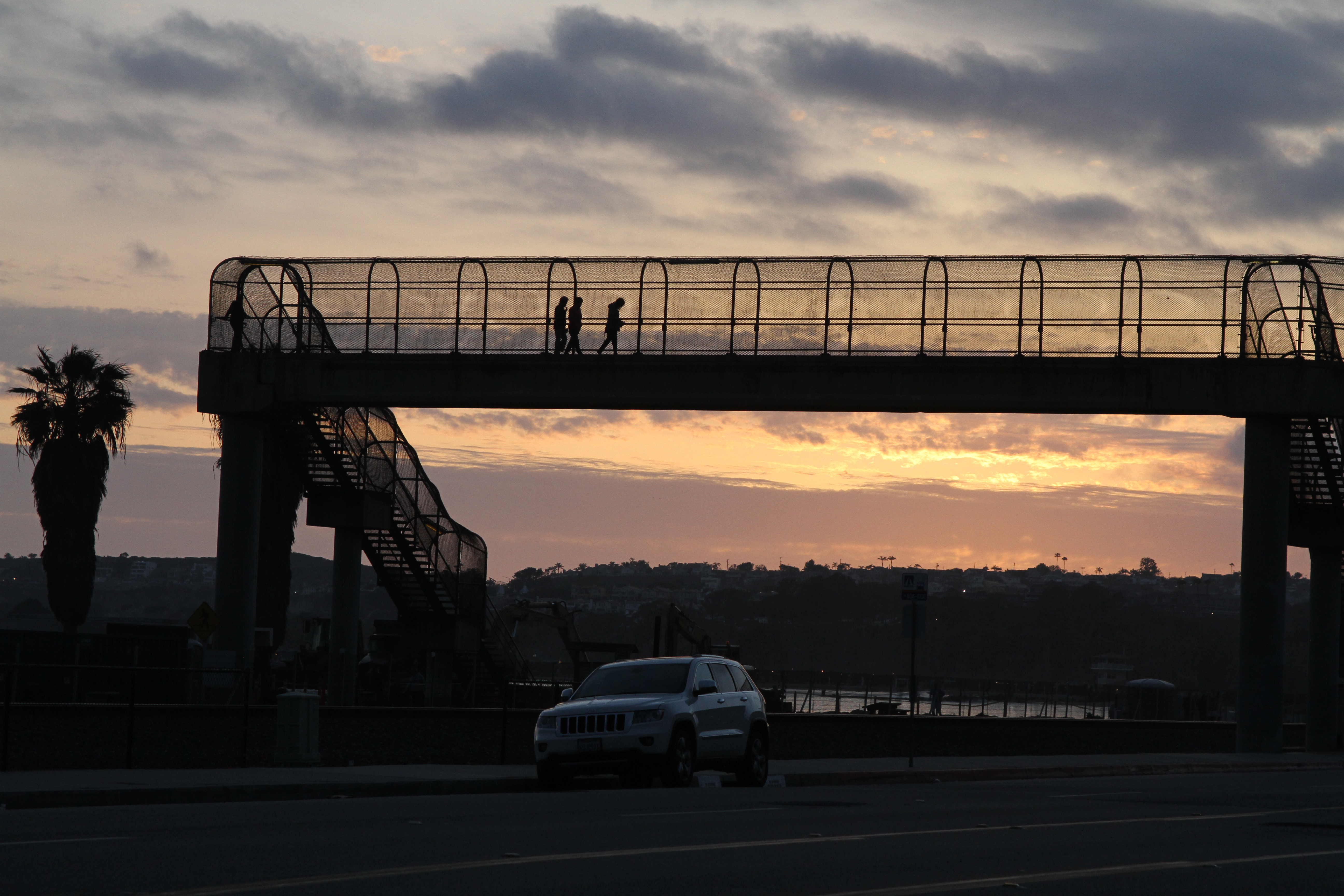 After years of work with the county, and in response to numerous requests from the community, Dana Point will soon have a new way to cross Coast Highway from the foot of the Palisades to Doheny Beach.

The county of Orange has proposed the demolition of the aging bridge and replacement with a fully signalized crosswalk replacing the span of the bridge over Coast Highway. The project would eventually be followed up in the future with a separate project—the replacement of the portion of the bridge over the Orange County Transportation Authority/Metrolink railroad tracks with a new span, complete with elevators.

Provisions of the agreement include full funding for and construction of the project by the county and upon completion, returning ownership to the city, according to the agenda report. The property would also be “given” to the county while it does the improvements, as required by state code.

“We’ve been working with the county on this for many years,” said Brad Fowler, the city’s director of Public Works and Engineering Services. “The county finally has funding for it and has been submitting plans for planning and city engineering to review, to make sure it meets our requirements, since we would be maintaining the traffic signal upon completion of the project.”

Known formally as the Capistrano Surfside Inn Pedestrian Overcrossing, the current two-span pedestrian bridge was built by the Surfside Inn —prior to 1989 city incorporation—as a California Coastal Commission condition of development to provide coastal access.

The county-owned bridge, located in front of the inn between Palisades Drive and Doheny Park Road, has aged to the point where replacement is necessary, according to county officials. In addition to corrosion, concrete delamination and spalling (cracking, pitting and flaking), the bridge is also not compliant with the 1990 Americans with Disabilities Act because it only has stair access.

A project report prepared by the county with input from the city and finalized in 2013. Concluded the best, most cost effective option was a two-phase plan beginning with an at-grade signalized street crossing and followed by a new bridge with elevators to be constructed over the railroad tracks.

On April 19, City Council approved a cooperative agreement with the county for Phase 1 of the project—demolition of the existing span of bridge over Coast Highway, and replacement with a crosswalk. Construction of a bridge with elevators over the tracks will come later, as Phase 2 of the project. That existing section of the bridge will be preserved until then, according to the staff report.

“It was my understanding that this bridge was going to be replaced, not removed,” Councilman Joe Muller said. “I am a little concerned about creating a signalized crosswalk, especially when in Dana Point near the Denny’s, our Dana Point bridge (was built) because they were requiring us to remove a crosswalk, for traffic concerns. Has there been a study done on what this will do to traffic on PCH? The speed limit out there is 50 mph and we’re going to create a crosswalk. That sounds very dangerous to me. And why are we moving from a bridge that needed to be updated, for sure, to a crosswalk where we will still have to go over a bridge to get across the railroad tracks. What’s the reasoning behind this?”

Fowler said the community has been asking the city to do some traffic calming along that stretch of roadway.

“The roadway, with a fully signalized crossing, we’ve always felt was safe and the county has felt it is safe. And from a traffic engineering standpoint it would be a safe crossing there,” Fowler said. “We didn’t want any of the ‘Mickey Mouse’ signals that you see with just the flashing lights and things. We do see a problem with that. The advantage from the county’s stand point is that it’s an affordable option for them, in great part. The difference between a crosswalk there as opposed to a bridge is significantly different in cost.”

City Manager Doug Chotkevys added that in the case of the Dana Point bridge, that project was done specifically to get people off the street to provide better traffic flow, whereas a crosswalk in this area is needed in order to provide traffic calming and a safe, ADA-friendly crossing.

“Yes, (the Dana Point bridge) was a traffic congestion relief project,” Fowler said. “We saved ourselves nearly an hour a day by putting pedestrians over the street, instead of across the street. … Every time you pressed the button to go across as a pedestrian it stopped traffic for an extra 15 seconds … that adds up.”

Muller also expressed concern with regard to taking on safety liability for the new crosswalk when the county turns the completed project back over to the city.

“The county seemed unwilling in the past to do the project unless the city took over,” Fowler said.

Councilman Scott Schoeffel noted he attended many of the past meetings with the county and knows the crosswalk plan was run past CJPIA (California Joint Powers Insurance Authority), the risk pool through which the city is insured, and they didn’t have a problem with it.

“It doesn’t take much visual acuity to see that the (existing) bridge is like London Bridge; it’s falling down,“ Schoeffel said. “It is crumbling. Gravity, age, saltwater has taken its toll. I continue to believe that it poses a safety hazard and is not ADA-compliant. It (the crosswalk) may not be a perfect solution, but it’s a meaningful and practical solution. And, most importantly, one that can get done, in real time.”

Mayor Pro Tem Richard Viczorek said he didn’t fully understand the county’s position in saying they would not proceed with the project, letting the bridge exist in its present state unless Dana Point agrees to bail them out.

“As long as we build it in a manner that’s consistent with approved engineering design, and maintain it in that manner, if the courts follow the law, we have design immunity and cannot be sued, or at least successfully sued,” Patrick Munoz, city attorney said. “That should provide some comfort … and as Councilman Schoeffel mentioned, we have run this by CJPIA and they … didn’t say, ‘Don’t do it.’”

“That’s comforting from a legal aspect, but from a safety aspect, it seems to be that a bridge is a much safer option,” Viczorek said. “I know that we’re putting in lights that are supposed to slow the traffic down and that might address the safety issue … but what I’m struggling with here is (the question of) why won’t the county put in the bridge? Well, it costs too much, apparently, and they want us to take it over. The speed limit there is 45 or 50 mph; what’s the effect on the traffic as well? Have we had any studies?”

“The traffic volumes on that street are very low, in terms of a four-lane thoroughfare,” Fowler said. “… The purpose of a study would simply be to determine whether the through-put there would change in terms of speed, and the answer is yes…. It’s not a light that will be going every 30 seconds, it’s pedestrian activated. So the frequency (of traffic being stopped) will be much less than you would see at other intersections.”

Viczorek asked what would happen should the city not agree to take it over.

“What if we don’t approve this,” he asked.

“You’re putting our fate in the county’s hands,” Fowler said. “I don’t mean to be glib but … we’ve asked for years and … nothing has been done.”

City Council voted 3-1, with Councilman Richard Viczorek casting the no vote. Mayor John Tomlinson recused himself from the vote due to a possible conflict of interest as the owner of property within 500 feet of the area.

Upon council’s approval, the matter was added to the May 9 Planning Commission meeting agenda, when the commission will consider the Coastal Development Permit for the crosswalk and signal.

According to Fowler, the crosswalk is within the authority of the city, and Planning Commission’s CDP consideration will be followed by Coastal Commission review of the bridge demolition portion of the project, tentatively set for June.

“The Coastal Commission retains jurisdiction over the demolition because the construction was originally under its jurisdiction,” Fowler said. “Assuming all approvals fall into place, I believe the county would propose to complete the work this fall.”

As for Phase 2, Fowler said that because the funding status of that part of the project is unknown, no estimated timeframe is set for the demolition of the replacement of the portion of the bridge over the railroad tracks.