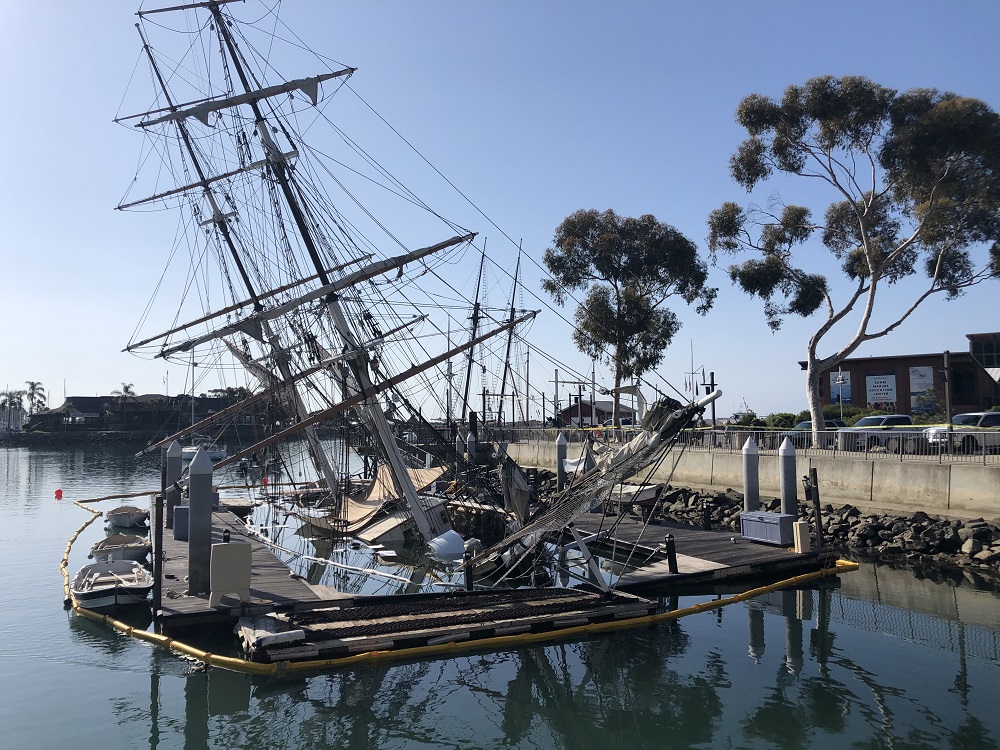 By Zach Cavanagh and Lillian Boyd

The Pilgrim, a three-masted schooner that was a full-sized replica of the merchant ship that Richard Henry Dana detailed in his classic novel Two Years Before the Mast, keeled overnight between Saturday, March 28 and Sunday, March 29 and sank in her slip at Dana Point Harbor.

Ocean Institute president Wendy Marshall said the Pilgrim is “incapacitated beyond repair.” Staff planned for a crane to lift the Pilgrim out of the water on Thursday, April 2 for inspection to determine the cause of its sinking.

“We share news that hurts our hearts,” Marshall said in a letter Sunday morning. “We are very sad to announce that Pilgrim, our beloved vessel that has served as an inspiring real-world classroom to hundreds of thousands of students and visitors, keeled overnight in her slip on our dock, rendering her useful life over.”

Staff had been monitoring the Pilgrim regularly, including the bilge pump, says Dan Goldbacher, director maritime for Ocean Institute. A bilge pump is a water pump used to remove bilge water.

Goldbacher explained to Dana Point Times how crews would use a crane on a barge to lift the Pilgrim for inspection.

“We were monitoring our systems and making sure everything was working correctly on a daily basis,” Goldbacher said. “Something happened between Saturday afternoon and early morning Sunday that wasn’t happening before. That’s what we need to figure out.”

However, crews determined Thursday afternoon that a different approach was necessary.

“Due to the fragility of The Pilgrim and the creaking noises the boat was making underwater, the US Coast Guard have pulled the divers out of the water and are switching tactics,” an Ocean Institute press release stated. “They are now engaging the crane to lift the keel. We had some raise on the initial lift but as this is a departure from the original plan, we are at a stop for today until a new plan can be designed.”

U.S. Coast Guard put a halt to the operations for the evening and will reconvene Friday morning. Crews will continue to use the lift, Goldbacher added.

“We will be able to use the tide to our advantage tomorrow when it’s lower and we can continue to pump water out,” Goldbacher said. “Tomorrow it will be a long process again. The sooner we can get it out of the water the better, but we want to do that safely. We don’t want to put anyone’s lift at risk.”

Dana Point Times reported on the Pilgrim’s latest needs for repair in the November 14, 2019 edition of the newspaper. Goldbacher had set up a GoFundMe account seeking to crowdfund $100,000 for upkeep and repairs; the majority of those costs was planned to go toward dry-docking. However, Ocean Institute is now asking people who wish to make a donation to do so directly at ocean-institute.org, since GoFundMe takes a portion of proceeds.

More importantly, both Marshall and Goldbacher ask people to continue sharing their stories about boarding the Pilgrim.

“The amount of people sharing their experiences has been overwhelming,” Goldbacher said. “Someone said to me that they think of the Pilgrim as the Statue of Liberty of Dana Point. We’ve heard from kids who’ve stayed on board, people who’ve sailed her, former crew members. It’s amazing how much she meant to people.”

While the original Pilgrim was constructed in 1825 and sailed from Boston to California for cattle hide trade in 1834, this Pilgrim was built in 1945 in Denmark for lumber trade. In 1975, the ship sailed to Lisbon, where it was converted to its latest rig.

The Pilgrim came to Dana Point Harbor in September 1981 to serve as a classroom for students at the Ocean Institute. She was visited by nearly 100,000 students and public visitors annually. Since 1981, the Ocean Institute has welcomed more than 300,000 students to step aboard the Pilgrim—some getting the opportunity to stay overnight to experience what life may have been like aboard a ship in the 1830s.

The Pilgrim underwent routine out-of-water and underwater inspections and had been scheduled for its latest repairs at a shipyard in San Pedro in January before a delay.

“In 2016, she was hauled out for survey and repairs,” Marshall said, “and in October 2019, we began a fund to support the haul out and repair scheduled to take place in January 2020. The haul out was postponed until June due to overload at the yard. Meanwhile, Ocean Institute maintained our certifications, and the United States Coast Guard issued a Certificate of Inspection (COI) in December and again in February, allowing our dockside programs to continue.”

Unfortunately, with programs at the Ocean Institute on hold due to the coronavirus pandemic, the Pilgrim had already given its final programs.

“We are sad to bid farewell to this iconic vessel, which has been such an important part of Ocean Institute’s programs and to the children that they served,” Marshall said. “Our staff was informed this morning, and we all feel like we lost a dear friend, as I am sure many of you do.”

Marshall said the Ocean Institute would “welcome” stories, images and other posts from patrons and visitors on how the Pilgrim made an impact on you. You can either post on social media with #brigpilgrim or email marketing@oceaninstitute.com.