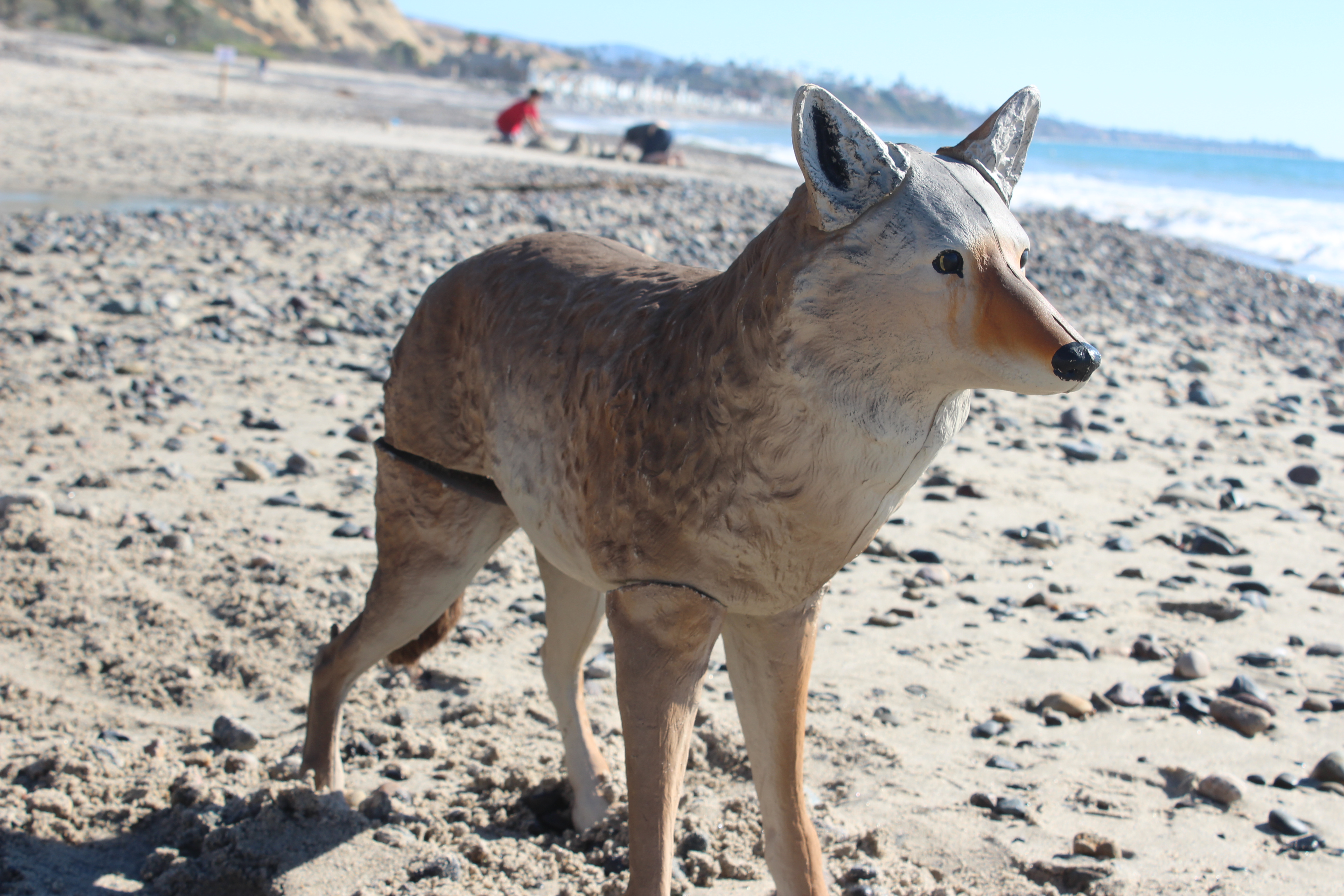 Orange County’s ongoing efforts to limit pollution at Poche Beach have turned to an unusual duo of helpers.

A pair of coyote decoys have been “patrolling” the beach since early November in an attempt to ward off seagulls. The gulls have been a persistent problem at Poche for years, and are thought to be responsible for high bacteria readings at the county beach, near the Dana Point/San Clemente line.

The city of San Clemente and Orange County have taken a number of steps in recent years to keep gulls from congregating on the shore, including the installation of ultrasonic devices and use of trained birds of prey. Such steps typically work for a time, but often seagulls adapt and return.

“The main goal is to keep the water quality good for the public,” said Kevin Estrada, a ranger with the county’s South Coast Operations. “For years, the gulls coming from the dump have driven down water quality ratings.”

Estrada, who has been with southern beach operations for three years, looked to Michiganders battle with Canada geese to solve seagull woes at Poche. Recommended as a geese deterrent by the Great Lake’s state Department of Natural Resources, Estrada deployed two coyote decoys to Poche’s shoreline on Saturday, November 9.

“I just checked it (Heal the Bay, Beach Report Card) and we have an ‘A+’ at Poche, so I guess the coyotes are doing pretty well so far,” Estrada said.

While the scare tactic appears to be working, Estrada was quick to be cautious.

Earlier this year, the county saw fending off gull success with a high-pitched ultrasound system on the beach. But the gulls returned, undeterred and seemingly became used to the piercing sound coming from beachside speakers. In August, the city hired a falconer who used trained, untethered hawks and falcons to ward off gulls. The county has also seen success with birds of prey at the Prima Deshecha landfill, the gull’s primary feeding site.

“The falconer did a great job, and there were no gulls there when he was there,” Estrada said. “But when he left, the gulls realized it. If we can have some combination of the two, then Poche could have an ‘A+’ rating all year round.”

From afar, the coyotes had been effective, said Tom Bonigut, assistant city engineer in San Clemente. The gulls appear, for now at least, to have migrated a few hundred yards north of the beach.

In recent days a large number of pelicans have gathered in their stead near Poche, but Bonigut said past DNA readings have shown few pelican signs, as opposed to hundreds of gull markers. To read the full beach report card, visit www.healthebay.org.