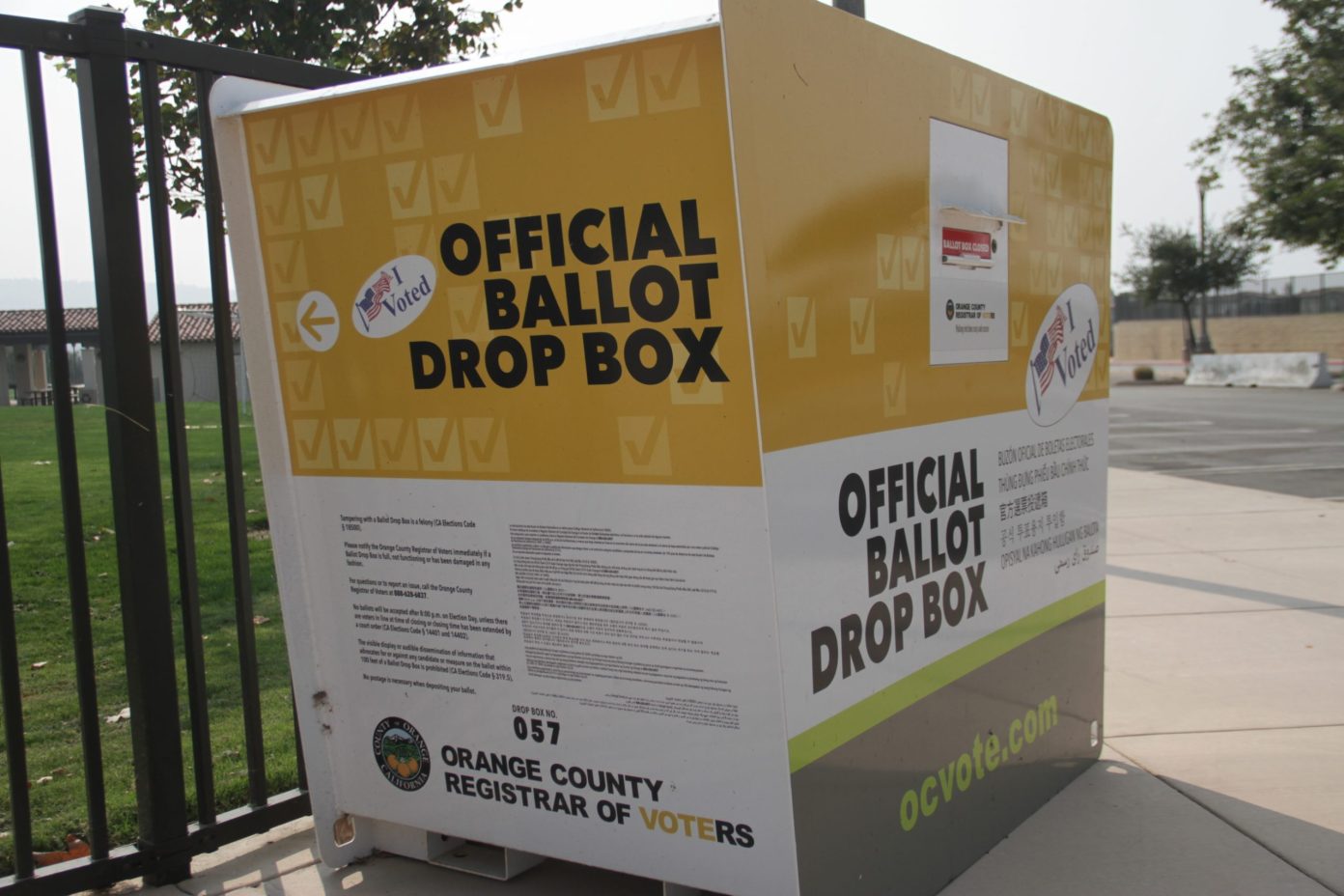 The nation is now fewer than 50 days away from the Presidential General Election on Nov. 3, but voters in Orange County can begin to cast their ballots as early as Oct. 5, when the vote-by-mail ballots are scheduled to start arriving in mailboxes.

Just like in this year’s Primary Election, voters will have three options when it comes to casting their votes. Voters can either return them to the Orange County Registrar of Voters’ office via mail, take it to a metal drop box or deliver it to a vote center.

The more than 100 drop boxes around the county will open starting on Oct. 5 and close at 8 p.m. the day of the election. In Dana Point, there were three drop boxes placed for the Primary. Those locations—the Dana Point Branch Library, the Dana Point Marina Inn and the Dana Point Community Center—are expected to be used again this fall.

At the centers, voters can vote in person, drop off their vote-by-mail ballot, receive a replacement ballot and register to vote or update their registration information, according to the Registrar.

Vote-by-mail drop boxes, like the one pictured here at the Jim Johnson Memorial Sports Park, will be available for voters to cast their ballots in this year’s General Elections beginning Oct. 5. Photo: Shawn Raymundo

The Registrar has yet to finalize the list of vote center locations. According to the Registrar’s office, there will be at least 167 vote centers within the county. The final number is based on voter registration numbers.

According to voting data from the Registrar, voter turnout in the March 3 Primary reached 50.1%, “the highest for a presidential primary election since 2000.”

Of those who participated in the Primary, 82% utilized the mail-in option, while the rest chose to vote in-person.

This past spring, the county operated 38 vote centers 11 days before the election, and an additional 150 centers four days prior to March 3. Despite vote centers being open for more than a week ahead of the election, most in-person voters waited until election day to deliver their ballots, data from the Registrar’s office shows.

“Few voters visited Vote Centers during the first seven days of early voting and waited until the last weekend prior to Election Day to cast their ballot,” the Registrar’s office said in a report to the California Secretary of State.

Between Feb. 22, the first day vote centers opened, and Feb. 28, the county collected a cumulative total of 8,857 ballots at its vote centers. On Feb. 29, three days before the election, ballot collections shot up to just shy of 8,000.

The county attributed the trend to a couple of different reasons, one being that voters were “waiting for political activities to occur.” Another explanation offered was the “feeling (of) a sense of urgency as the last day to cast a ballot nears.”

The new, vote-by-mail system under the Voters Choice Act was implemented for the first time this past spring amid a shift in voting practices that trended toward mail-in balloting. But with the COVID-19 pandemic, the state has put a larger emphasis on voting by mail.

According to the Registrar’s office, voters will be able track their vote through ocvote.com/track. More details regarding this year’s local elections and the voting process will be released on Sept. 24, when the county mails out its Voter Information Guide.

The deadline for registering to vote online in California is Oct. 19.