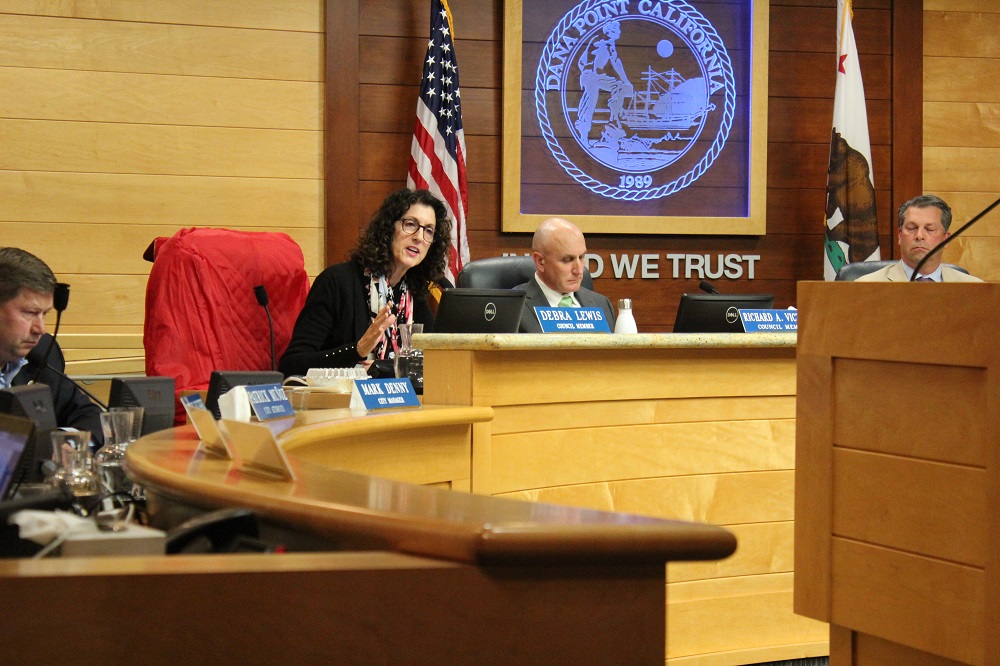 A verbal altercation during a Dana Point City Council meeting was the last straw for Councilmember Debra Lewis before she accused her fellow councilmembers of being discriminatory while behind the dais.

Lewis had added an agenda item for the Tuesday, Feb. 19 meeting in order to discuss restructuring the planning commission so that each councilmember could nominate a candidate of choice from a pool of applicants. That nominee, preferably a resident of the district he or she would represent, would then need a majority approval from council. Currently, the planning commission is not districted, as council is, but prospective commissioners need majority approval after following through an application process as described in Policy 302.

“Each district is going to have different issues. Each councilmember has different goals and priorities as determined by the voters of their district,” said Lewis. “It’s more fair and representative if each of the commissioners represents the interests of their district.”

Following Lewis’s remarks, Mayor Joe Muller passed the floor to Councilmember Jamey Federico. Federico asked what would be done if there were no qualified applicants within one of the districts. Lewis answered that a councilmember could nominate a candidate from another district in that situation, but that the preference would be his or her own district.

“My question remains unanswered; how do we achieve what is being discussed here if we don’t have qualified people from a specific district? I think there are a lot of faults to this and ultimately I want to hear what other councilmembers have to say about it,” Federico said.

Lewis attempted to respond to Federico’s remarks before Muller instructed she did not have the floor. Muller and Lewis proceeded to disagree and speak over each other.

“Miss Lewis, you do not have the floor,” Muller said multiple times.

“This is our chance to talk and debate. It’s very difficult to talk to someone and have an intelligent discussion.  . . . But if you don’t want to do that, we’ll go round and round,” Lewis said.

Upon each councilmember stating their position on changing Policy 302, Muller gave the floor back to Lewis, the lone woman on city council, to speak.

“I notice when Wyatt was talking, you had no problem cutting him off, asking him some questions, having a back-and-forth discussion . . . you didn’t jump in and say he didn’t have the floor. . .” Lewis said. “This is not the first time I have been treated differently on this council.”

Lewis alluded to members of the public who have spoken at the podium about her treatment on council in the past.

“I think tonight made it very clear,” Lewis said. “You were just fine having a back and forth with another councilmember to clarify something, which I have no objection. You were fine with Mr. Federico having a back and forth with me. But when I posed a question, you jumped in. I’m now adding my voice to the many residents who have asked me how I tolerate this. Well, I don’t.”

In response, Muller denied treating her differently. Lewis’s motion to change Policy 302 was voted down 3-2, with Muller, Federico and Councilmember Richard Viczorek voting no.

Following adjournment of the council meeting, Lewis stated to Dana Point Times that there is misogyny on city council.

“Miss Lewis is not treated differently; she just acts differently,” Muller said in a phone interview. “Trust me, if I was a misogynist, my wife would have no problem letting me know.”

The city adopted Dana Point City Council Resolution 97-09-23-02, which instructs how council shall conduct itself while in session. According to Section 2D, “Once recognized by the Mayor, a Councilmember shall not be interrupted when speaking unless called to order by the Mayor . . . unless the speaker chooses to yield to a question by another member of the Council.” According to 4A, “Any Councilmember wishing to speak must first obtain the floor by being recognized by the Mayor.”

“Silence of the victims of harassment and the ridiculous excuses used by the perpetrators of harassment is what allows misogyny to continue,” Lewis said in an email. “It needs to be called out explicitly without sugar coating if it is to stop and perpetrators held accountable.”

The next council meeting is scheduled for Tuesday, March 5 at 6 p.m. To view a recording of the Feb. 19 council meeting, visit the YouTube page for City of Dana Point. –Lillian Boyd