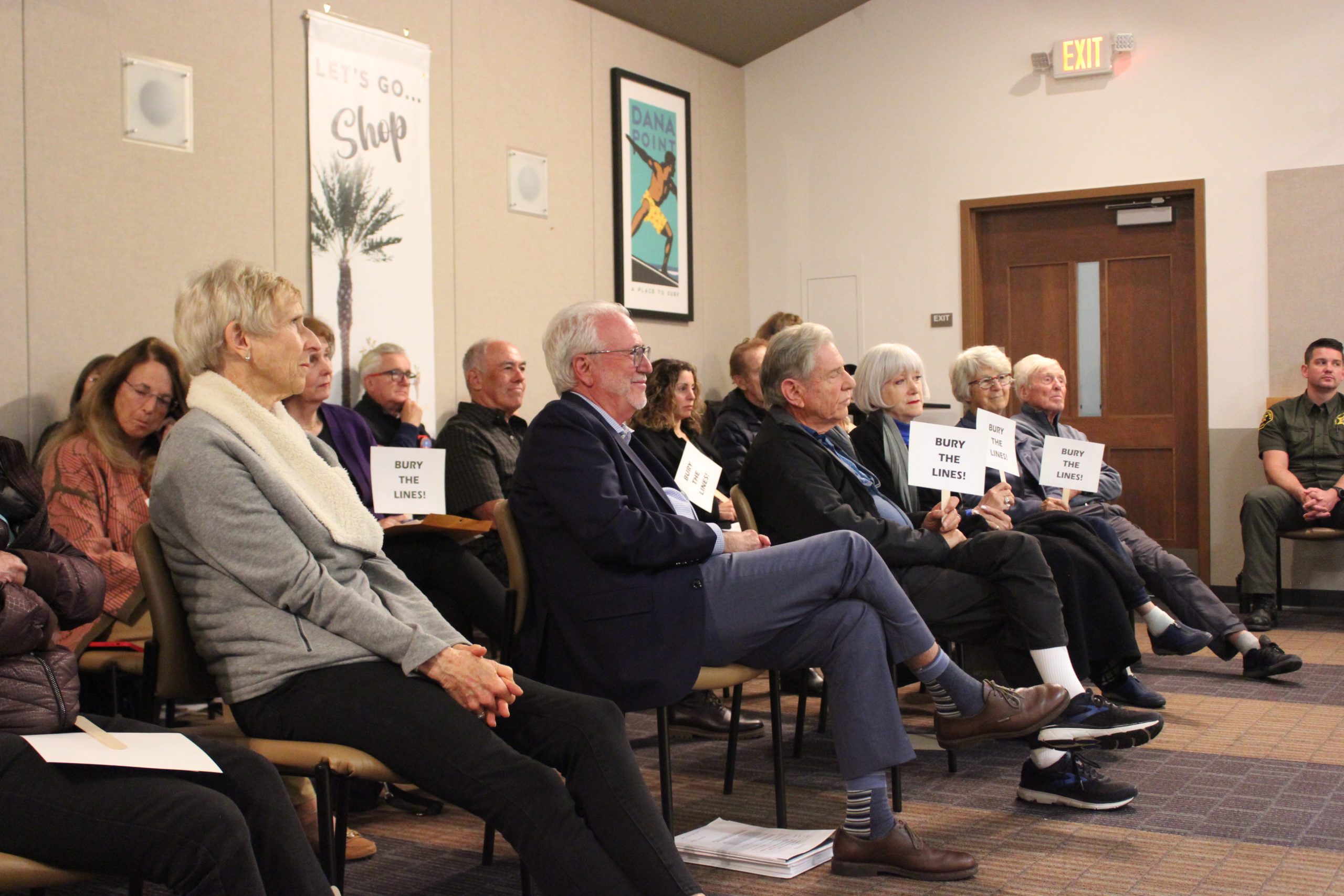 Dana Point City Council approved on Tuesday, Nov. 15, a guideline aimed at helping homeowners through the process of getting their overhead utilities put underground—a process with an estimated total cost between $310 million and $421 million for all undergrounding projects in the city, according to a citywide assessment.

During Tuesday night’s council meeting, the city presented its Utility Undergrounding Assessment District Procedures Guide, which comes a year after councilmembers had voted unanimously to contract NV5 to create a map of the existing overhead utilities and develop an estimated cost to perform citywide undergrounding.

“We need to be leaders and figure out how to help people get these things underground,” Councilmember Jamey Federico said, noting that the city has management, ownership and leadership roles to play in the effort to underground Dana Point’s utilities.

The guide that the council approved offers a step-by-step approach, from how to form districts to available funding options, so resident home and property owners can get their utilities undergrounded.

Federico acknowledged the city does not—and is not likely to—have the funds to underground all of Dana Point’s overhead utilities.

“But we can be leaders and figure out how to get them underground,” Federico said, adding that those efforts could start with the city’s own projects—referred to as Rule 20A projects—which involve utilities in public areas.

Potential undergrounding projects are broken down into three categories: Rule 20A, Rule 20B and Rule 20C.

Rule 20B projects tend to be utilities on residential areas, “generally for special benefit, localized as possible.”

Rule 20C projects, Cooper said, are projects that do not fit rule 20A or 20B and “tend to be a few odd poles in remote areas.”

To underground utilities in 20B projects, residents usually need to form an Underground Utility Assessment District, a special district of properties sharing in the cost of undergrounding overhead utilities within the boundary of the district.

Property owners interested in forming an assessment district will be required to provide a deposit to pay for the cost of a consultant needed to manage the undergrounding request.

In forming the underground utility assessment district, residents can choose to follow a “traditional” or “streamlined” approach.

The risk with the traditional approach is that the district could fail to be formed after paying the upfront costs to create plans and gather bids; however, the advantage is that costs are known before forming the district.

Mayor Joe Muller noted that it could be worth going through the traditional approach if the city could own the maps. In the case that an assessment district fails to gather enough votes to form, the maps would still be available in the future if residents want to try again.

“There could be a benefit for the city to get involved in some of that, and to just put it in our archives,” Muller said. “And then when it’s time, if the community wants the assessment district, we have it, we can send it out for bid and then, it might move a little bit quicker.”

Property owners interested in forming an assessment district submit a letter to Dana Point’s Public Works Department expressing the intent and describing the proposed boundaries of the area.

Boundary maps are then drawn and submitted to utility companies “to ensure that the boundaries are logical and feasible,” according to the guide.

A minimum of 60% of property owners in a proposed assessment district must sign the petition in support of the proposed project. If the project goes to a ballot, it will need to receive more than 50% approval to move forward.

Each homeowner’s assessment amount would be listed on their individual ballots. Ballots must be checked yes or no, signed, and returned by to City Hall either in person or by mail.

If the vote passes to form the district, the council can then vote to approve it. In the case that the undergrounding project gets approved, “all property owners within the district will be responsible for the assessment amounts regardless of a property owner’s personal vote,” Cooper explained.

Once an undergrounding project is approved, the overhead utility lines will remain up while the infrastructure is built underground. Only after each homeowner has reconnected to the new underground system will the overhead poles and lines be removed.

NV5 estimates that the price to underground overhead utilities is roughly $1,000 per foot, with the estimate current with inflation.

City Manager Mike Killebrew asked Cooper what would happen if an individual does not want to reconnect to the underground system or cannot afford to. Cooper explained that all property owners would have to reconnect to the grid for the overhead poles and lines to be removed.

The city can get the authority to reconnect a property if a property owner refuses to do so, with the cost of reconnecting put on the property as a lien.

Citing his experience with districts voting for undergrounding in Newport Beach, Cooper noted examples of where the city had threatened to impose a lien but ultimately it wasn’t necessary.

In the process of undergrounding utilities, the city may need to repair streets, sidewalks and alleyways, as Cooper noted the construction can’t avoid affecting other infrastructure near it.

The total cost estimate for all undergrounding projects in the city landed between $310 million and $421 million.

“That was great news that it wasn’t $500 million, so very excited about that,” Poles and Lines Coalition (PAL) Co-Treasurer and Dana Point resident Kiana Berkman said. “I want to address the fact that the last two meetings that you guys had, a conversation was made about the safety of this community.”

Berkman commented that overhead utility lines pose a safety concern, noting how OCFA crew were warned of a potential safety hazard posed by nearby powerlines while working to extinguish a large house fire last May.

Federico noted that the cost estimates do not include the cost to reconnect their homes to the new underground power grid.

“I just want it to be very clear to our residents and for everybody who’s considering it,” Federico said. “None of those numbers include the connection after the fact, so you still have to connect from the street to your meter.”

The cost to the property owner to reconnect to the underground system varies depending on the size of the property, how hilly it is, and how far away the house is from the main line. Generally, the cost to reconnect varies from $5,000 to $10,000.

“Councilmember Federico is exactly right, the city is never going to have the money to do this, but we could have some money to help,” Muller said, noting that the city could add a line item to the budget in the future for the planning costs of forming an assessment district.

Cooper added that this would be similar to Newport Beach’s process, where the city fronts the money for the planning costs and is later paid back the funds from the assessment district.

Though the Poles and Lines Coalition has met with Rep. Mike Levin and discussed possible state and federal funds available for undergrounding, Cooper noted that he “hasn’t seen the money.”

Residents Marilyn and Len Gardner commended the city for its approval to begin the process of removing overhead utilities on Stonehill Drive and installing underground utility facilities during a City Council meeting in February.

“We need to build on this foundation and continue moving forward,” Len Gardner said. “To that end, we would like to suggest that some of the funds in the city’s budget surplus be allocated towards undergrounding.”

Len suggested the city allocate a portion of its budget surplus to pay for a grant writer to pursue state and federal grants. He also argued that SDG&E should “pick up the balance.”

“It’s only fair that they do, as they will save millions of dollars a year in maintenance costs in making the investment to bury their lines,” Len said.

State and federal money is being used to underground larger transmission lines rather than smaller, residential distribution lines, Cooper explained, as they pose more of a fire risk.

To save on costs, the city could bid out the projects itself rather than go through power companies as it may be able to get better bids, Cooper said.

PAL members argued for the city to make room in future budgets for undergrounding efforts.

“I love our city, I love living here in Dana Point; it is a point of pride that we owe to ourselves to invest in,” PAL member and resident Bonni Pomush said.

“Let’s get a lot of us invested,” Pomush continued, “whether it’s the electric company or other government agencies; please create the infrastructure with a budget line item and a person to leverage those funds so that they can go further to modernize Dana Point, to create value and to safeguard all of us.”