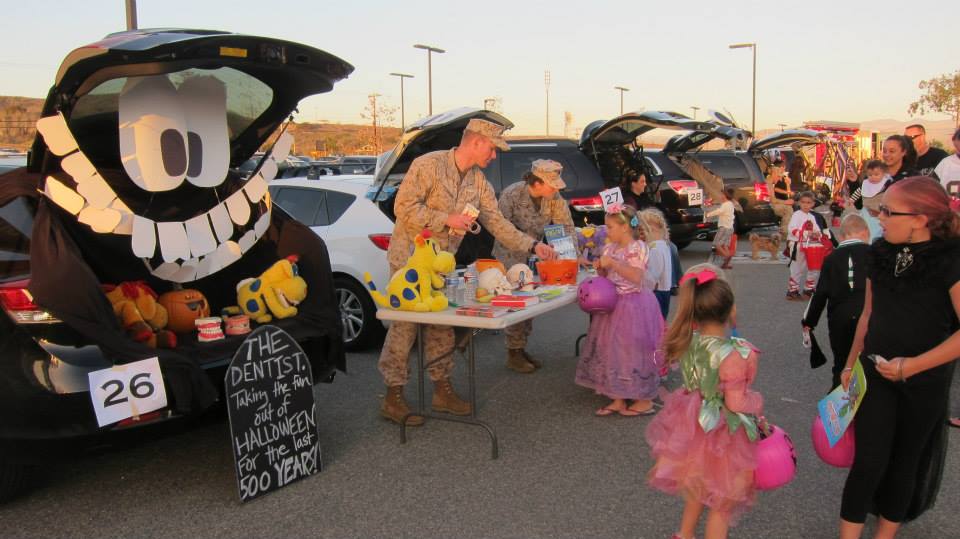 A Halloween haven for 5th Marine families at Camp Pendleton

Children of the “Fighting Fifth” Marines were out in full Halloween force Wednesday, October 30, as the 5th Marine Regiment hosted a trick-or-treating holiday alternative for Camp Pendleton-stationed families.

Decked out in costumes of their favorite characters, like minions from Despicable Me (one and 2), Disney princesses from Belle to Cinderella and comic book heroes like Batman and The Hulk, more than 350 kids practiced the Halloween tradition with their Marine Corps family, before hitting their community’s streets the following night.

The event was the brainchild of new 5th Marine commander Col. Jason Bohm as a way to bring the regiment’s five units together. Each unit’s Family Readiness Officer, who act as liaisons between the units and family members, put their collective efforts together to put on the event.

“Adults and kids love Halloween, making this was one of the most feel good events we have sponsored,” said Kim Merkel, family readiness officer for regiment headquarters.

With the help of the regiment’s adoptive cities and support groups, like San Clemente and the Dana Point 5th Marine Regiment Support Group, 40 vehicle trunks and truck beds were transformed for the night’s tricks and treats.

A crowd favorite that night was a spooky, miniature golf course hosted by members of the 5th Marine family, Jim and Carla Hogan, whose son, Lance Cpl. Donald J. Hogan, was killed in August 2009 in the Helmand Province in Afghanistan. Since Donald’s death, the Hogan family has continued to support the 5th Marines by reaching out to families and deployed Marines, Merkel said.

Merkel said, with the success of the regiment-wide event, the readiness officers hope to keep bringing the entire 5th Marine Regiment family together.