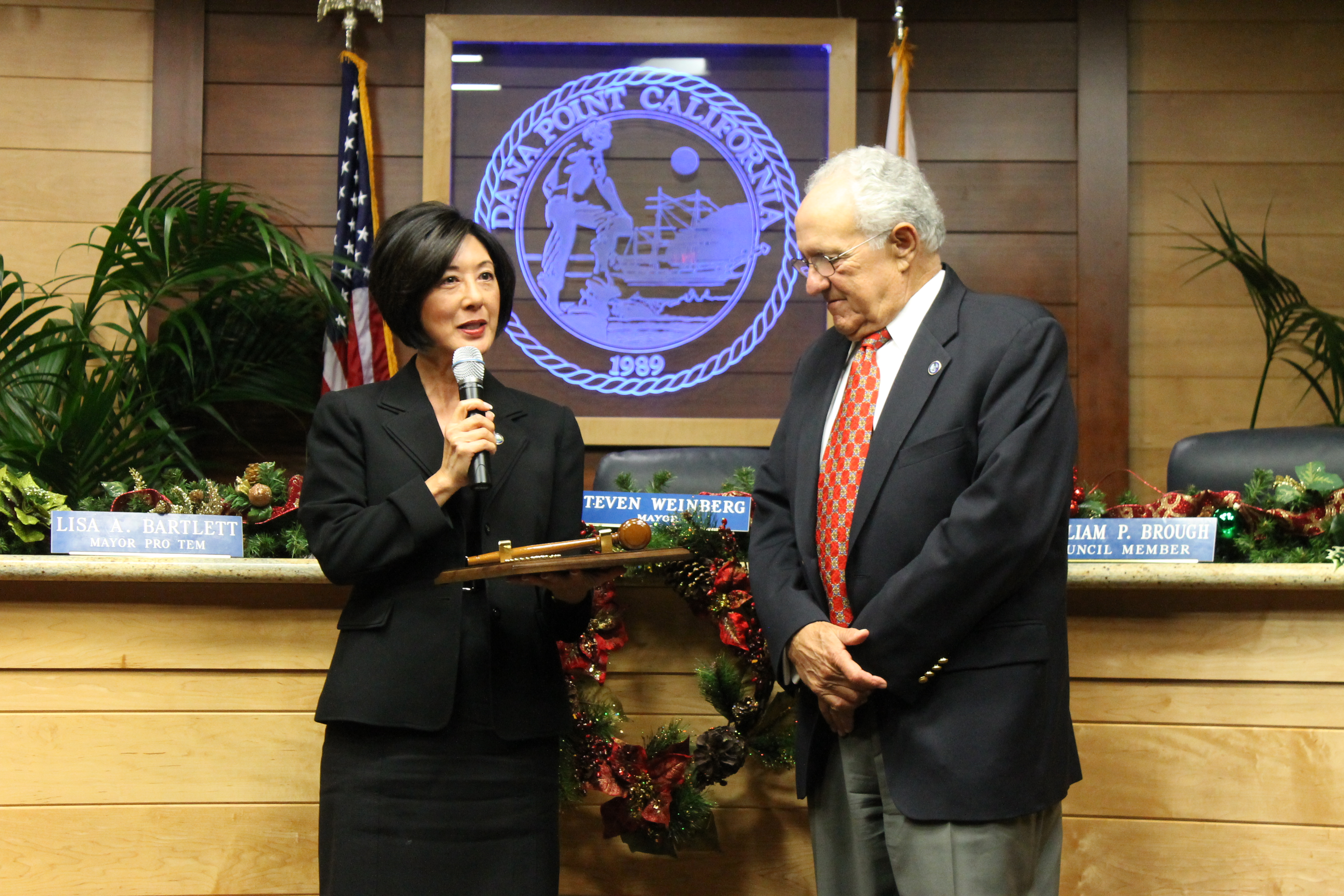 Each year, the five-member body shakes up its lineup by voting two council members, mayor and mayor pro tem, to formally lead official proceedings and to act as figurehead representatives at city functions.

In a 3-2 vote Tuesday, with councilmen Carlos Olvera and Bill Brough dissenting, Bartlett took over Weinberg’s role. The pair would flip-flop their council titles, both having served the posts before.

Councilman Scott Schoeffel served as mayor pro tem in 2010, under Bartlett, before taking on the role of mayor in 2011. The board’s two newest members, Brough and Olvera, elected in 2010 and 2012 respectively, have yet to serve in either capacity.

Weinberg and Bartlett each nominated the other for the board’s leadership roles. The former being selected mayor pro tem in a 4-1 vote. Brough, nominated mayor by Olvera, provided the lone nay.

“I am truly honored to have been chosen by my fellow council members to represent the city of Dana Point as their next mayor,” Bartlett said in an email to supporters Wednesday evening, announcing her mayoral appointment. Bartlett, who is in her second council term, announced her candidacy for Orange County Board of Supervisors in October to replace the termed-out 5th District supervisor Pat Bates.

The newly designated mayor was the strong public choice Tuesday, as all six public speakers on the impending selections endorsed Bartlett for mayor, and Councilman Scott Schoeffel for mayor pro tem.

Residents commended both council members, and Weinberg, for their dedication to Dana Point and experienced work on the council and Planning Commission, and with arts, education and transit programs in Dana Point, among other projects.

Some highlighted a need for experience as the city’s downtown revitalization project pushes forward.

“This coming year we’ll see a lot of important moments with the Town Center project, and Lisa Bartlett and Scott Schoeffel, as well as yourself mayor, have been the only ones on the dais involved in the project since its inception,” said Ross Teasley, who worked with the city on its zero-waste campaign.

“You don’t put a rookie quarterback in in the fourth quarter of the Super Bowl,” Teasley said. “Lisa and Scott know the game plan of the Town Center project … they have the winning record.”

Public comments on the matter sparked debate amongst the board’s members, some of whom claimed responsibility for getting the project moving.

Weinberg opened the council’s conversation by nominating Bartlett for mayor. Olvera in turn endorsed Brough for the seat. When Weinberg called for a vote, Brough asked for a discussion period.

“If you want to use a football analogy, I’d say Town Center the ball was fumbled and I picked it up and took it down to the 20-yardline, and it’s first down,” Brough said, crediting himself with helping the project’s revival.

Olvera said when he ran for office last year on the promise of kick-starting the project, people in town said it could “never, ever” be done. He added he had a hand in discussions long before sitting on the dais.

“I learned that the staff wasn’t napping, it was only the council afraid to move forward,” Olvera said.

After a back-and-forth volley, between Olvera, Brough and Weinberg, the then-mayor said others on the board had amnesia and tended to forget there was a recession at the time.

Discussions on Dana Point’s downtown revamp began in the’90s. ROMA Design Group was hired in 2004 to create a plan for Town Center and a community advisory committee was formed the next year. The council approved plans for the estimated $19 million revitalization project in 2006, with the California Coastal Commission following soon thereafter.

But movement on the project came to a halt shortly thereafter with the economic climate change, but was jumpstarted last year by a citizen coalition, the water district, city staff and the City Council. In May, the council set aside $9.2 million for the first phase of construction, but money needed to complete the full project along Del Prado Avenue has not yet been identified.

“We are finally coming out of it (recession),” Weinberg said. “It depends on what sound bites you are listening to. You can spin it any way you want, but it had a lot to do with money.”

Weinberg closed the discussion, called for the vote and Bartlett was appointed mayor. In her first officiating role, Bartlett opened mayor pro tem nominations. She herself nominated Weinberg. In the 4-1 vote, with Brough dissenting, Weinberg was selected for the seat.

“I was disappointed with the campaigning done last night showing organized support for Bartlett and Schoeffel,” Councilman Carlos Olvera said in an email Wednesday. “The mayor and mayor pro tem selection is recognition by the council based on working relationships, not public input by political supporters. I question some of the choreographed speakers.”

Tuesday night Councilman Brough questioned it as well. In discussions about the nomination, Brough said he wanted to shed light on the public speaking portion of the night. Brough, who once served as Assemblywoman Diane Harkey’s chief of staff, has filed papers to seek Harkey’s current 73rd District seat in November.

He pointed out that one speaker, Art Sanchez, past president of the South Orange County Republican Assembly, was a supporter of a fellow GOP state assembly candidate Anna Bryson, who serves on the Capistrano Unified School District Board of Trustees.

Schoeffel himself has supported Bryson in the past, holding an October campaign fundraising event at a Capistrano Beach restaurant, but added his support of Bartlett had nothing to do with the impending California State Assembly elections.

“I would mention the support for one campaign and the vote for the mayor does not necessarily have to do with one another,” Schoeffel said. “In my mind the two are completely separate.”

When contacted after the meeting, Teasley and South Coast Water District board member Rick Erkeneff, who also called on the council to select a Bartlett-Schoeffel ticket, said there were no organizing efforts prior to Tuesday’s meeting.

Both stated they had no previous knowledge of others intending to speak in support of the pair.

With the nomination and backing of the community and council allies, Bartlett will once again serve as mayor. After the meeting she praised the right and ability to have political discussions, and said she’ll continue to work with council colleagues to work for Dana Point.

“I look forward to serving the residents of Dana Point once again as mayor and continuing to work with our partners to provide effective regional leadership,” Bartlett said.

That night the council voted unanimously to award a construction contract to Los Angeles Engineering, Inc. for the first phase of downtown street improvements, with an estimated $6.5 million cost by staff.

Work will include street-level construction to make Pacific Coast Highway a two-way road, create bus pullouts, add medians and change landscaping. Crews will also conduct work along the northern end of Del Prado Avenue, where it splits from PCH. Construction is expected to begin early next year when the South Coast Water District completes its work on underground utilities.

As a whole, the council also approved rebranding the Town Center as the “Lantern District.” City Manager Doug Chotkevys said both Weinberg and Olvera were working with a subcommittee to brand the area as something unique.

Brad Fowler, the city’s director of public works, added, “Every city has a Town Center.” The rebranding decision could mean a reworking of the district’s retrofitted entryway signage at Copper Lantern, and added sidewalk stamping throughout the project. Council agreement on the revival Tuesday ended there.

Andrea Swayne and Jim Shilander contributed to this report.