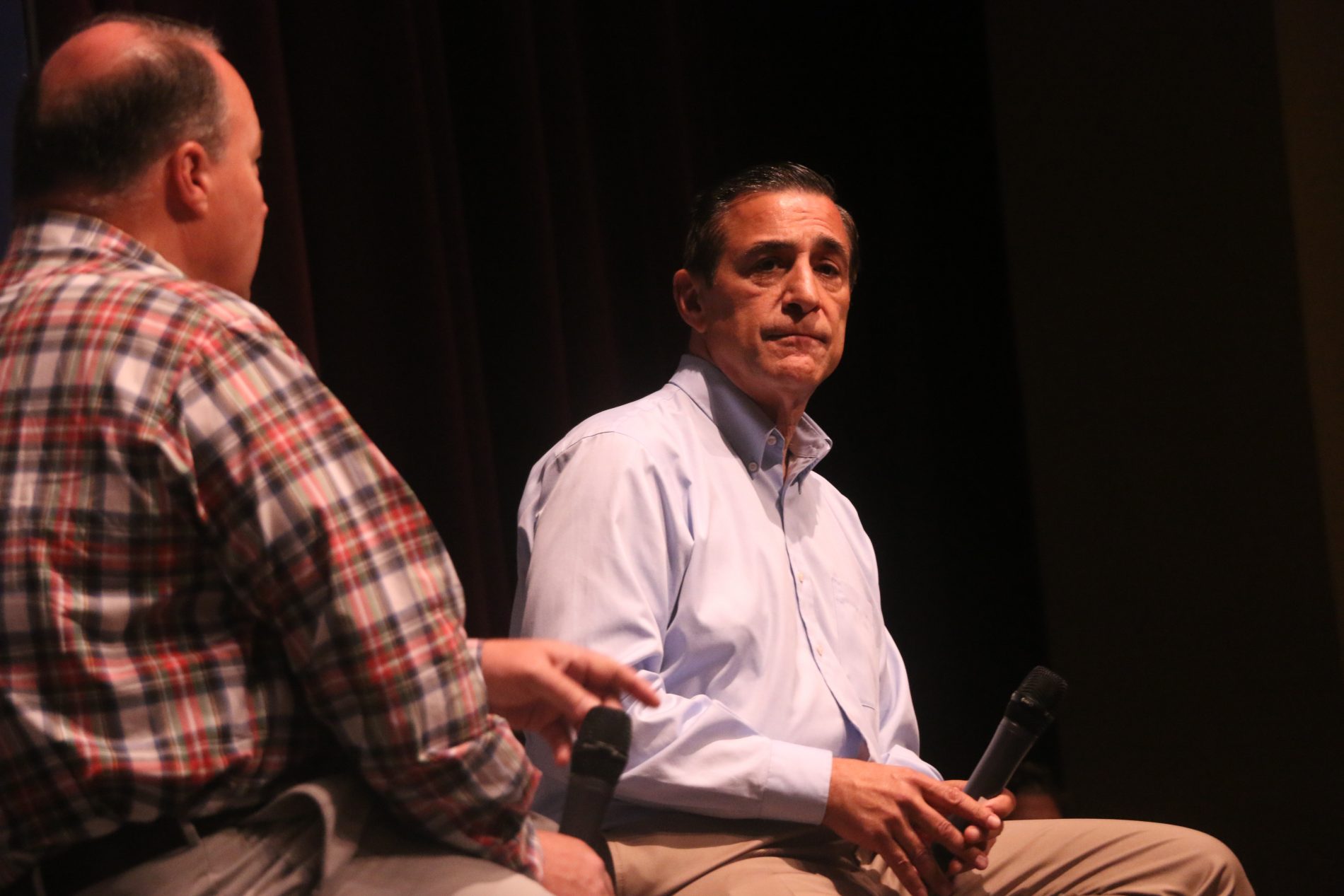 Congressman Darrell Issa wades through questions on federal, local issues from the public

Like many of his colleagues in Congress, Rep. Darrell Issa, R-CA, of the 49th district hosted a town hall meeting and faced questions from local critics as well as supporters of him, and they had concerns.

Issa hosted the town hall meeting on Saturday morning, June 3, at San Juan Hills High School in San Juan Capistrano. The meeting was scheduled to end at 10 a.m. but continued for almost another hour, with a variety of questions submitted by the public.

Town halls and getting responses from Issa have been a source of controversy. Some organizations have been protesting his actions—for one reason or another—at his office in Vista.

Last week, a photo of Issa on top of his Vista office was circulated on Twitter by one of his 2018 opponents, Mike Levin of San Juan Capistrano, claiming the congressman wasn’t doing his diligence in addressing questions from the public. Issa will also face his 2016 opponent, Ret. Col. Doug Applegate.

More than 500 people came to the town hall, some of whom could not get in because the venue was filled at capacity. Protestors and supporters were outside San Juan Hills High School for the duration of the meeting.

Prior to the meeting, a giant inflatable chicken with President Donald Trump likeness was placed outside.

This article covers Issa’s responses to healthcare, the toll roads and climate change during the town hall meeting. The congressman also addressed education, his relationship with Trump, immigration and more. A full video of the town hall is available here.

The topic of the day was healthcare, specifically regarding the American Heath Care Act, which is currently making its way through the Senate. It already passed the House of Representatives.

The Congressional Budget Office has forecasted the bill would leave 23 million Americans without healthcare. The bill also has background information that predicts the reform would to reduce healthcare costs for individuals by 50 percent.

“I voted to move that bill to the Senate when the score said…more than 10 million of those people who they say will lose their healthcare will choose, simply, not to be insured,” Issa said.

That response didn’t sit well with most audience members.

“One of the natures of the Affordable Care Act was that it was anti-choice,” Issa said. “You didn’t get to choose (your provider) or not to have an insurer. It is one of the reforms that people with good conscience should have as broad a choice for insurance.”

Issa also emphasized his opposition to single-payer healthcare, also known as universal, because of the burden it could place on governments.

The California Senate passed a bill that would allow for single-payer coverage on Friday; however, initial reports show there may not be a financially feasible way to implement it. The legislative analysis estimated $400 billion would be needed to fund it.

Issa said that although the proposed toll roads are not a federal issue, he does support a route that would not bifurcate San Clemente, but he also said he would not want a toll road to disrupt any operations at Camp Pendleton Marine Base to the south of the city.

Issa said there is an agreement with the Navy of an alignment that would place a toll road through the northern portion of Camp Pendleton. What’s stopping it is the California Legislature, he said.

“If they lift the embargo, we can have something that works for San Clemente and the military,” he said. “All of you need to get behind the original alignment. It doesn’t impact as many communities. We’ve got to have Sacramento let us put in an alignment that works for everybody.”

Approximately 95 percent of audience members raised their hands when asked if they oppose the current toll road proposals.

The announcement by Trump that the United States would remove itself from the Paris climate accord has been shaken people up globally.

France issued a counter video to the announcement shortly after it was made, deeming the move irresponsible, and the statistics used to justify the move are not credible.

“We put out a statement that we were disappointed in the tactics that the president is using, although he said he’s going to engage and negotiate a better deal,” Issa said. “We, America, is leading the charge on reducing emissions. I would have preferred he negotiated from that position. We need to have China and India, who did not pledge to reduce (pledge to reduce their emissions).”

In August, the Dana Point Times sat down with Issa and asked him about his views on climate change. At that time, he said he does not completely support the theory that global warming is happening and that it is not “sound science.”

Recently, Issa became a member of a bipartisan climate change caucus in Congress, which he said he did because there were “likeminded” representatives in the caucus.

“We need to do things that help modern energy, not just clean coal,” Issa said.

What Made You Want to Attend the Meeting?

Prior to the meeting, the Dana Point Times spoke to a few people about what made them want to attend the Saturday town hall.

Christine MacLean attended the meeting because she is concerned about the possible new federal healthcare bill among other issues.

“I’m worried about climate change and women’s rights, but I think we’re going to deny healthcare to so many people,” MacLean said. “I think Obamacare could have been improved slightly, but we shouldn’t just get rid of it and start over.”

Asked about the president’s announcement to leave Paris climate accord, an agreement to reduce pollution among various countries, MacLean said she believes that would have devastating consequences.

“I couldn’t be any madder. I’m slightly more disgusted every day,” MacLean said.

Chris Woods said he came to the meeting because he wanted to become more active in political processes.

“I haven’t been involved in anything political since the Vietnam War,” Woods said. “I think the issues today, not only locally but nationally, demand not just mine but everybody’s participation. I see a lot of dysfunction at the national level for a variety of reasons, not least of which is we have a narcissist (referring to Trump) who is deconstructing everything that we have stood for, for over 200 years.”

He said it is important for Congress to question the president’s motives.

“The Republican Party has got to give our children and our grandchildren something to aspire to,” Woods said. “Right now, they’re not doing that.”

Clad in a Donald Trump campaign flag and a “Make America Great Again” hat, Arthur Schaper said he is a supporter of Issa, but he said he wanted the congressman to be more accessible to the people he represents.

“I wanted to actually go to a republican town hall, and I want to go to a town hall where I don’t have to shout, because I’m outraged with the decisions that the congressman is making,” Schaper said. “I support Darrell Issa; I’m not happy with all of his decisions. But he should win. He’s done more for that state of California than Mr. Applegate could do.”

Schaper said Issa should not be giving in to the political will of the democrats in Congress.

“The democrats have ruined our state, and I want republicans to win, but they need to remember who they work for, and that’s the only problem for Darrell,” Schaper said. “I used to call his office, and no one would pick up the phone. Now, they pick up the phone. What he doesn’t need to do is go left. He needs to vote right.”

Schaper said he was in favor of repealing the current healthcare laws and to implement a fee scale in order to lower costs for service. He said there are ways to make it more affordable.

“The Senate needs to take it farther, and I would like Obamacare repealed in full, and I’d like to see real reform,” Schaper said. “It needs to be across state lines, make it easier for doctors to serve in different states and not get another license. (The bill) needs to make it easier for them to open their own private clinics. I think we should reduce the role of the insurance industry and make it more like car (insurance), only for catastrophic needs.”

He hasn’t given any indication that he would not run for another congressional term, but when asked by an audience member if he will, Issa didn’t hesitate with his response.