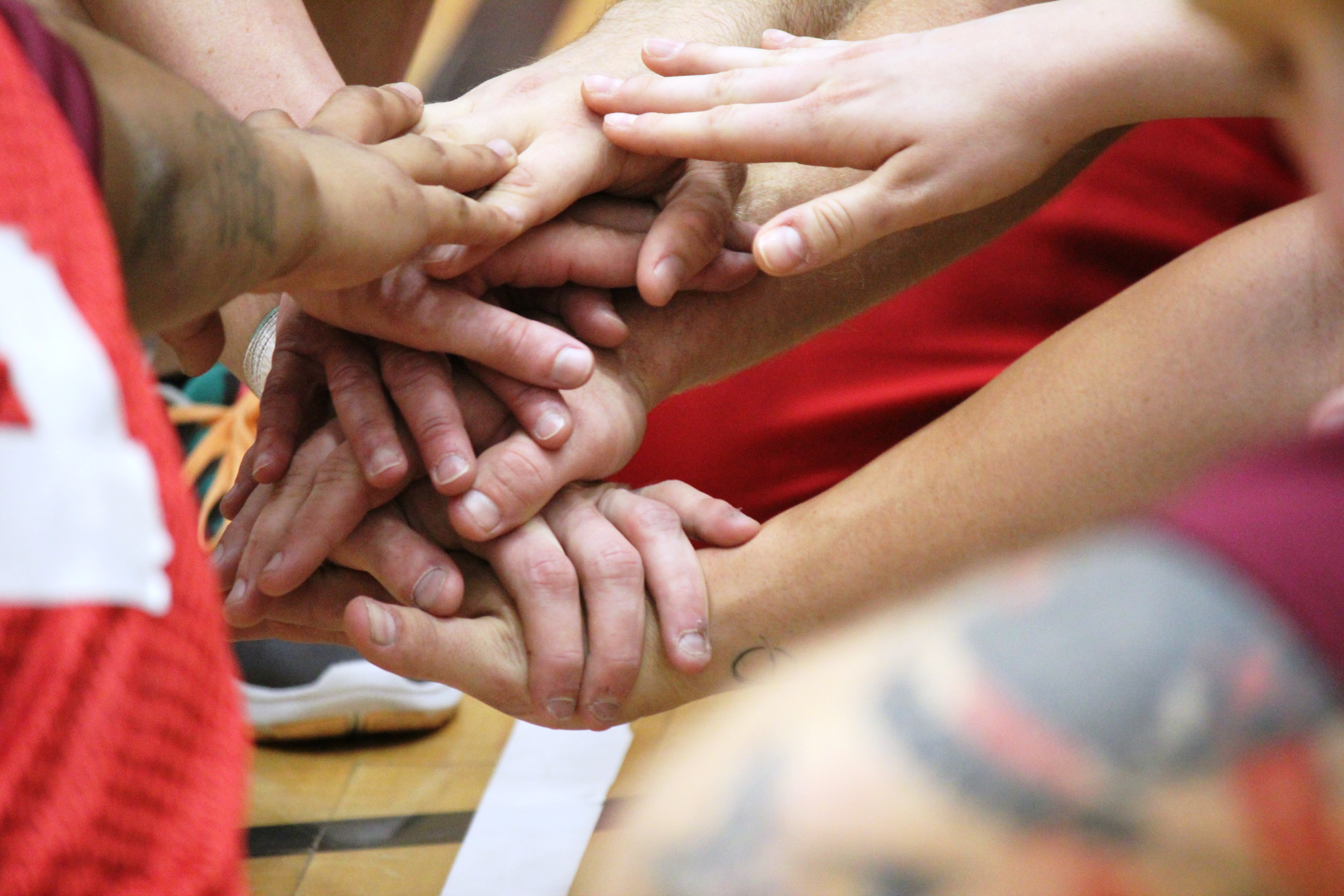 Cpl. Richard Stalder’s life changed before he ever deployed.

As he prepared to move out with his unit, Stalder received the same pre-deployment immunizations as his fellow U.S. Marines. But his body did not react well and he was unable to deploy.

“I was in a combat battalion and not being able to deploy and watching my brothers leave without me put me in a big dark place for a long time,” Stadler said.

Now at 23, Stalder still suffers from full body tremors, unstable gait and fainting episodes. Because of the physical instabilities, he relies on a cane for walking and often uses a wheelchair—a vehicle Stalder now employs on his road to recovery.

The regiment provides non-medical care and strategic planning for Marines and sailors attached to or who served in support of Marine units that are ill, wounded or injured. Servicemen and women who are being treated for wounds received in battle, injuries incurred while training or who are suffering from mental scars related to their time in combat all fall under the regiment’s scope.

Also, Marines who are fighting terminal or other illnesses receive care. The regiment doesn’t differentiate between causes, it simply exists to support Marines, keep them in the military for as long as possible and help them transition back into civilian life, among other services.

There are two battalions of the regiment, with the western division being housed at Camp Pendleton.

For Stalder, the regiment introduced a new way of life and gave him something to be proud of.

Over the last week, he joined more than 350 wounded, ill and injured active duty and veteran Marines, as well as military counterparts for nine allied nations, to compete in the fourth Marine Corps Trials at Camp Pendleton.

The trials are the first step for many Marines to compete in the Warrior Games, a worldwide, Paralympic-style event held in Colorado Springs, Colo., at the U.S. Olympic Training Center and the U.S. Air Force Academy. Here, Marines under the Wounded Warrior regimental scope have the opportunity to train for events including wheelchair basketball, seated volleyball, track and field, shooting, recumbent cycling and swimming.

Regimental commander Col. Willard Buhl said the importance of these events goes well beyond Camp Pendleton, the participants and their families.

“This is important to the Marine Corps, and this is important to the world,” Buhl said. “This is about recognizing the sacrifices of the heroes of the 9/11 generation and keeping them in the public’s mind and hearts. Each and every one of these men and women are healing right now, and so are the caregivers, the volunteers and the leaders who are enabling them to heal.”

The event provides an opportunity for Marines to get out of their barracks and military hospitals and to feel special and a part of something larger than themselves. It gives them the chance to return to the brotherhood and sisterhood they’ve known, and it reestablishes some of that camaraderie they may have lost, Buhl said.

“Most of the Marines in the Wounded Warrior Regiment are on their way back to society,” Buhl said. “This regiment generally starts our Marines on a positive path to a healthy life in the years ahead.”

For Stalder this rings true.

“I was told I needed to come down here and try some of this out,” Stalder said of joining the regiment and training for the games. “I did, and I haven’t been in a dark place … in a long time. I have brothers here now. I have something to look forward to. I have something I’m actually good at.”

Stalder, who got the nickname “Shaky Jake” due to his tremors, said the competitions also provide him with a welcome respite from the stares and questions he sometimes gets on the outside, in civilian life.

“Nobody looks at me funny here. When I go out to a restaurant and I’m in my wheelchair or I’m hobbling with my cane, they look at me funny, they wonder what’s wrong,” Stalder said. “Here, I don’t have to worry about that. It’s a good feeling.”

Inspiring Across the World

Veteran Artem Luzukin lost both legs above the knee after stepping on an improvised explosive device on June 22, 2011, in Afghanistan. But he hasn’t let his injuries hold him back.

Months after the incident, Luzukin began training in seated volleyball and wheelchair basketball.

“It helped me cope and put my anger and frustration toward a different direction,” Luzukin said.

While he competed in past years, this year Luzukin focused on his training and improving his skills. Even without contending in this round of trials, Luzukin sees the significance his involvement in the contests and training camps plays in his physical and mental states of recovery.

“I honestly didn’t realize just how important this program was until I actually got to the trials,” Luzukin said. “It’s an epic program. There’s Allies from different countries. I’m talking to other guys and hanging out with them. A lot of guys came to seriously compete and win, but a lot came for the camaraderie.”

Luzukin said the events help him reconnect with others going through the same situation.

“When you retire, you go back home … you’re isolated,” he explained. “It kind of keeps you back in the loop with everyone and keeps you occupied. These people will help you … and you can keep yourself busy throughout the year.”

At last year’s trials, Luzukin had the chance to meet the United Kingdom’s Prince Harry. That royal visit to Aspen, Colo. inspired Harry to create a similar style event in Britain, known as the Invictus Games.

The announcement came last week where, according to the Associated Press, Harry joked the event was “such a good idea by the Americans that it had to be stolen.” The games are set for London’s Olympic Park this fall.

A number of British Royal Marines were among members of the armed forces Allies competing at Pendleton this year, which also included contingents from Georgia, Colombia, the Netherlands, France, New Zealand, Germany, Australia and Canada.

Jenae Piper, an active duty member of Battalion West, came to the unit last year just as the trials began. She was unable to compete.

This year, she medaled in shooting and cycling. Piper also competed in seated volleyball.

“Everyone was talking about it, and I was like ‘What is all this? I want to do something,’” Piper said. “I felt like an outsider last year because I was so new and everyone had their own groups and their own teams. Being a part of it makes a huge difference, mental more than physical for me.”

Having not fired a weapon in the Marine Corps since 2010, Piper said she was pleased with her performance and with her gold and silver medal wins in the air pistol and air rifle contests. Being her first year of competition, Piper said there is plenty of room for improvement.

For many, the trials and Wounded Warrior Games simply serve in their recovery process, to strengthen their physical abilities, build confidence and reestablish military relationships. For others, the games serve as a stepping stone for high competitions—mainly the Olympic counterpart, Paralympic Games that take place just behind the summer and winter contests every four years.

While most don’t make it that far, the competitive nature of most Marines should never be underestimated, said Lt. Col Dan Huvane, who serves as a public liaison for the Wounded Warrior Regiment.

“It’s no easy thing,” Huvane said. “It’s a long road with a number of different steps to become Paralympians, but for a few at least, that’s something they can do. Marines have a competitive instinct.”

For most, however, it’s about providing a spark that keeps them going through their recovery.

“Many have called it a crucial step in their recovery,” Huvane added.

Buhl said the effort is remarkably important. And the games are a modest symbol of our nation’s overall responsibility to these men and women who volunteer for service.

“We as a nation have to understand that whenever we send our young men and women to war of any kind, or often just into harm’s way, they’re not going to come back the same,” Buhl said. “They’re volunteers, but we have a responsibility to them as a nation to care for them … We owe them for the rest of their lives.”