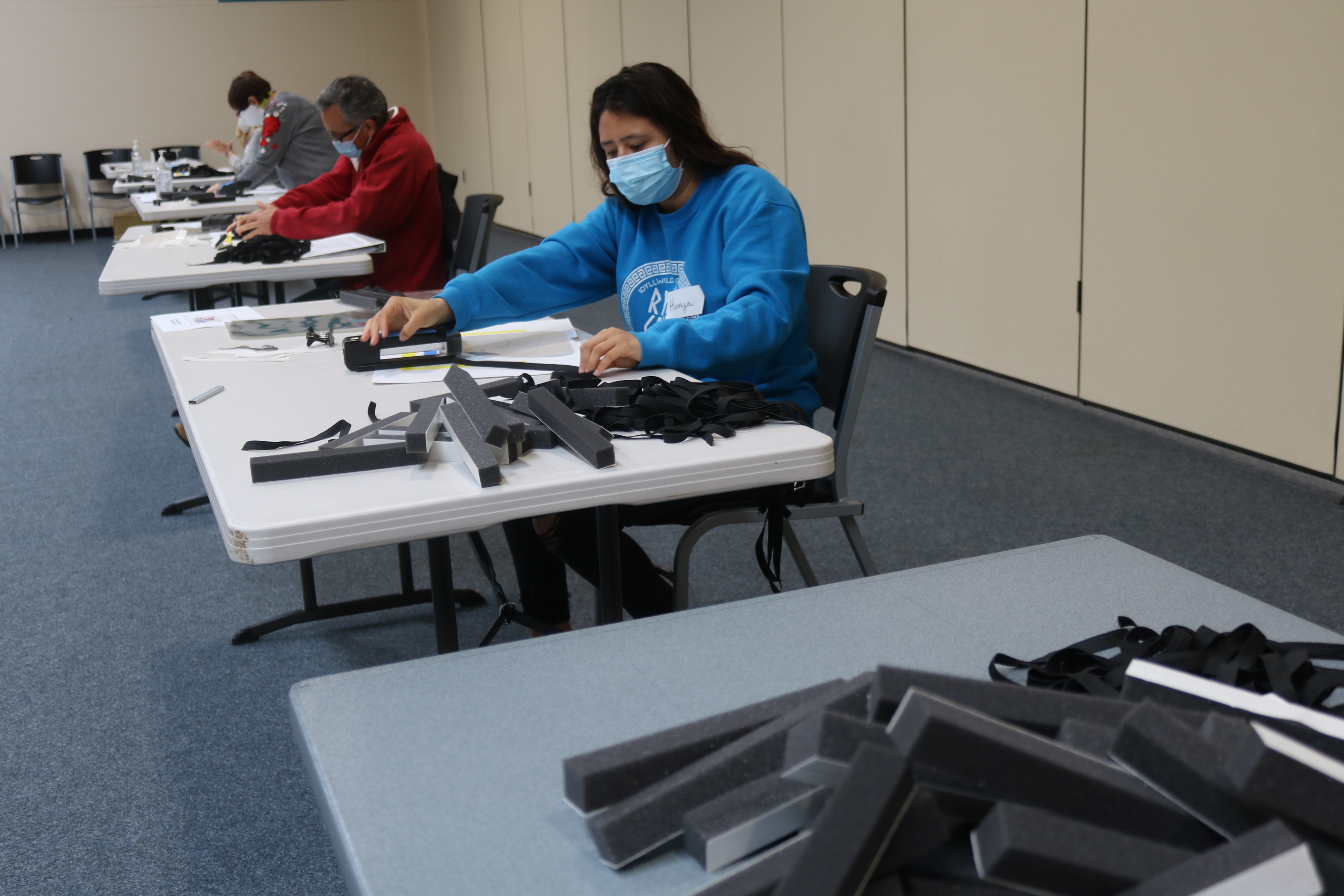 Countywide, organizations like Orange County’s Rotarian clubs (including Monarch Beach Sunrise Rotary Club) have gotten in on the efforts by launching the Rotary Face Shield Project—an initiative gathering Rotarians and volunteers to assemble thousands of face shields to distribute to hospitals and senior living facilities.

“When I was watching the news, the president and the doctors and nurses were saying how they weren’t getting the PPE,” recalled Marc Aarons, the district governor for Rotary District 5320, which comprises clubs in Orange County. “I also remembered hearing about an ER doctor passing away helping other people. I said, ‘Let’s try to get something organized to at least get our local hospitals supplies.’ ”

Throughout the pandemic, one of the major storylines has been the shortage of personal protective equipment (PPE) at hospitals.

Officials from Mission Hospital in Mission Viejo have previously explained that while staff has been able to reuse face masks, hospitals simply don’t have the supply necessary for the influx of patients.

Guidance from the Centers for Disease Control and Prevention (CDC) recommends that health care facilities practice an extended use of face masks or allow face masks to be used beyond the shelf-life as part of strategies to optimize supply.

“Our strategy, No. 1, is to preserve PPE as much as possible. So, developing systems that don’t require specific change” of equipment such as masks and gowns, Keany had said. “No. 2 strategy is reuse and decontamination. And the third strategy is extended use . . . they’re meant for certain hours, but we’re having people extend that use beyond recommended hourly use.”

Louise Herbert, a San Clemente resident and member of the Democratic Women of South Orange County, recently put out a call for volunteers to help assemble homemade face masks using bed sheets, T-shirts and other fabrics.

Touching on Mission’s shortage of PPE, Herbert said one of the volunteers who responded to her call for help was a neighbor whose daughter works in the intensive care unit as a nurse for the hospital.

“They’re in desperate need of masks,” Herbert said of the Mission Hospital staff, before adding that her neighbor’s daughter was also told to reuse her N95 respirator mask for three days before it fell apart.

Herbert got to work by playing around with patterns, modifying them to her liking and began sewing the masks together. She then emailed neighbors and friends asking if they were interested in also making masks from their own homes—to ensure social distancing—while Herbert handles distribution. From there, the Sewers of South OC was born.

To assemble the masks, Herbert explains, her team of South County sewers went through bed sheets and quilting fabric. She said she was also recently fortunate enough to be given 25 yards of fabric from the JOANN Fabric and Craft Store.

However, the assembly did briefly hit a snag, Herbert noted, as elastic for the binding is currently on short supply, as well. Instead, for now, she and her team have gotten creative by using T-shirts to make the binding.

“We have given out more than 300 masks in eight days,” Herbert said on Friday, April 3. “And I have more that can be picked up.”

More than 100 of the masks so far have gone to Mission Hospital, with the help of her neighbor’s daughter, Herbert said. Several more masks have gone to clinics in Orange and Laguna Hills, as well as Trader Joe’s in San Clemente and the United Consumer Food Workers Union.

And with the help of the Rotary, which pumped out about 15,000 face shields the first weekend of April, hospitals within St. Jude’s network of medical facilities, including the one in Fullerton, were able to get about 10,000 of those masks, according to Aarons. Even more shields were assembled over the second weekend of April.

The number of face masks given to a facility depends on how much money each individual Rotary club donates to the cause.

“Each club donates money, and they’re allowed to donate their percentage to whatever facility they want,” he explained, noting that each shield costs about $2.

Rotary District 5320, which includes the Rotaries in Dana Point, San Clemente and San Juan Capistrano, has five locations set up throughout the county where both members and volunteers can help put the shields together.

Aarons notes that they can only accommodate about 200 to 300 participants at a time in order to practice social distancing requirements such as spacing work stations six feet apart. He also stressed that they’re wiping down areas and screening individuals before entering.

“We do check (everyone’s) temperatures. They have to answer health questions before coming into the room,” Aarons said. “It’s a very sanitized environment.”

For more information on how to get involved, email District Governor Designate Dan Ouweleen at 2021dan@gmail.com.

To volunteer with the Sewers of South OC, email Herbert at louhsc52@gmail.com.