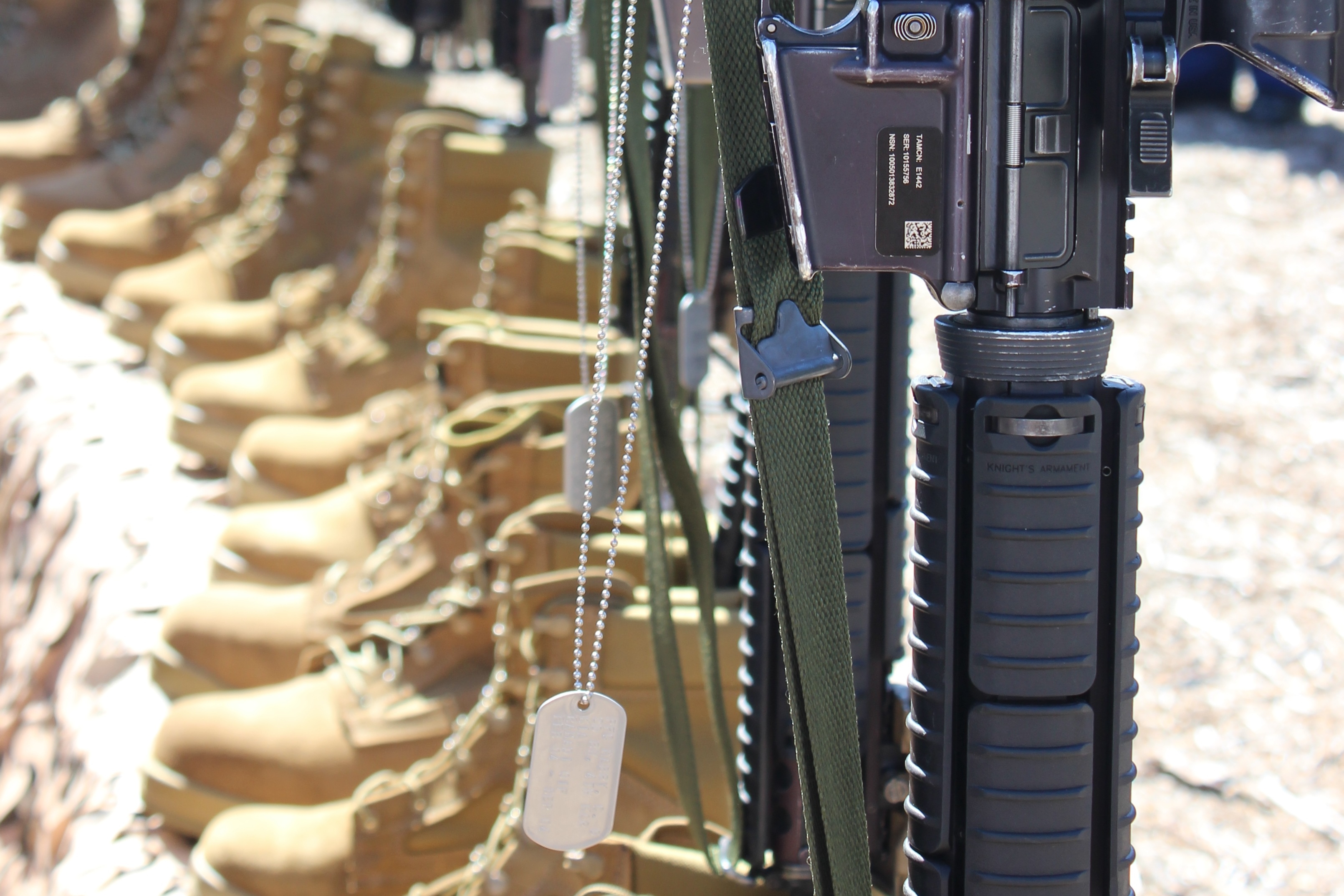 Ten years after the Battle of Ramadi, Marines and families gathered to remember those lost

By April, the U.S. Marines’ mission to secure and provide stability to the region during Iraq’s transition to democracy shifted. The situation in Ramadi quickly changed into “full-blown urban combat,” Lt. Col. Rob Weiler told hundreds of Marines and family members Sunday morning at a gathering marking the battle that began 10 years ago to the day.

The first day of fighting began April 6, 2004. By September that year, 269 Marines were wounded and 34 Marines and one Navy corpsman had lost their lives in support of Operation Iraqi Freedom.

Their service and sacrifices were honored Sunday at Camp Pendleton’s San Mateo Memorial Garden, where monuments stand to remember the servicemen and women who fought, and died, in the nation’s wars in Iraq and Afghanistan.

“Today we are surrounded by heroes,” Weiler told the crowd. “But the veterans of Battle of Ramadi probably don’t think of themselves as heroes.”

Weiler, who served with the 2/4 in 2004, recalled the sounds hanging in the air the days leading up to and during the battle.

“(I remember) The sound of exploding IEDs (improvised explosive devices), radio chatter, morning and evening prayer from the mosques, the celebratory gunfire on wedding nights and the distinct pop of an inbound rocket or motor,” Weiler said, his voice carrying the emotion.

Marines of the 2/4, also known as the Magnificent Bastards, were remembered for their bravery and final sacrifice.

The 2/4 experienced the greatest loss of life for any battalion in more than 12 years of war, Maj. Gen. Lawrence Nicholson told the gathering.

“In short order, this battalion had to get ready to take on, what we knew then would be one of the most challenging missions that any battalion could get,” Nicholson said.

After the speeches, each fallen Marine was honored with the nation’s oldest military award: the Purple Heart, known in 1782 as the “Badge of Military Merit” when introduced by President George Washington.

Thirty-four names were called and 34 Marines walked, placed the Purple Heart medal and saluted the names on the granite memorial for those killed in Iraq that reads, “Fallen and Never Forgotten.”

Family members inspected belongings and were encouraged to take dog tags and other memorabilia that were carefully set on battlefield crosses, formed with inverted rifles, boots and helmets, commemorating each fallen Marine.

Gillen Morris traveled from Chicago to attend the ceremony. His brother, 19-year-old Pfc. Geoffery S. Morris, a member of the Pendleton-based 2/4, was killed April 4, 2004.

“It’s stirring up a lot of emotions,” Morris said of the ceremony. “Hearing my brother’s name when it (was) called … I couldn’t help crying.”

Andrea Papagianis contributed to this report.