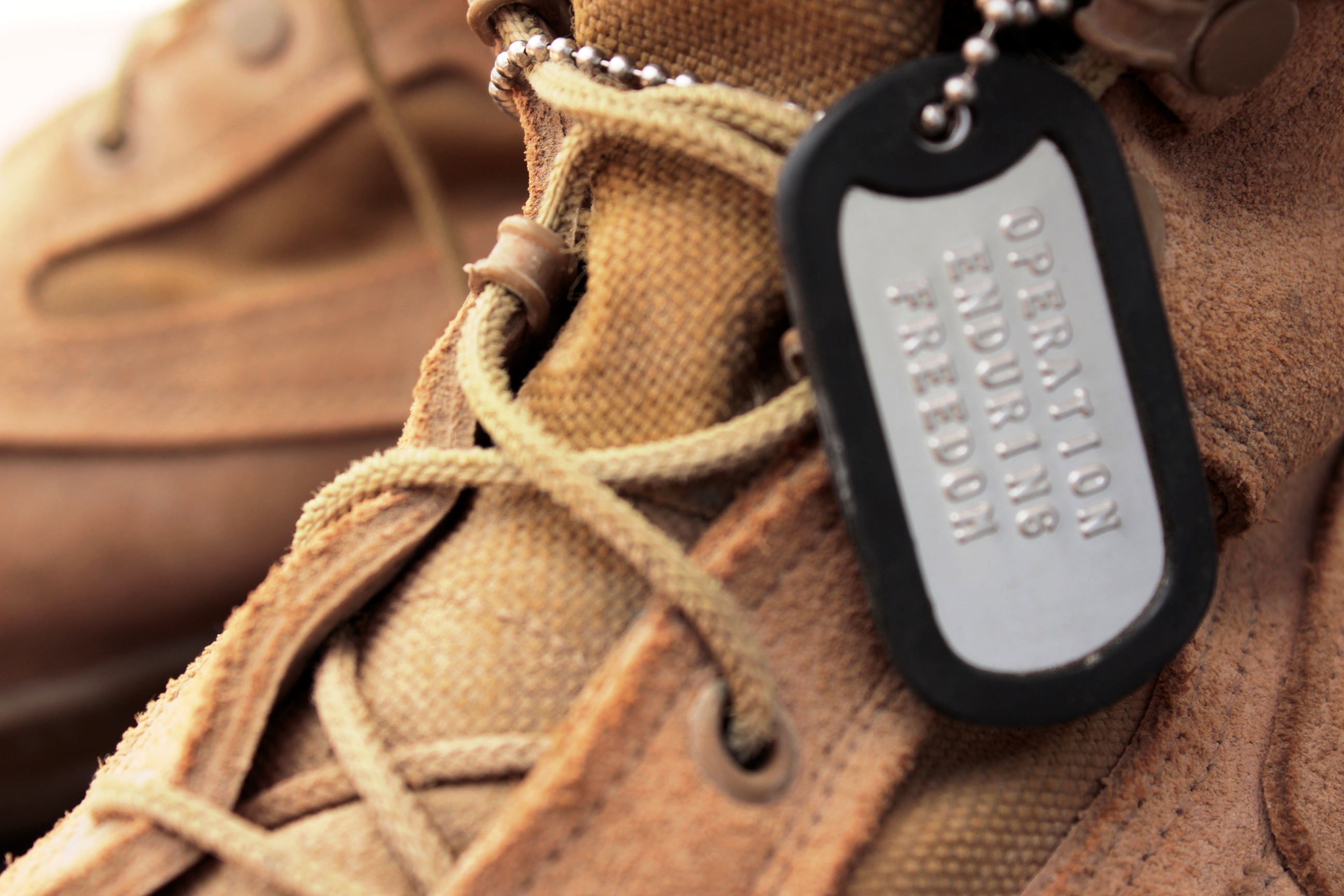 His seemingly happy life from the outside was strained with anger, frustration and sleepless nights on the home front. And as Stephen slipped further away from his wife Melissa and their young son Jack, a new normal emerged.

With one tank of gas, one gauge hanging too near ‘E,’ their world imploded. When the dust settled, with their home in violent disarray, their reality became a little clearer.

“He looked like a tornado of anger,” Melissa said of the night she stood back and let her husband get all his yelling, throwing of things, stomping of feet and slamming of doors out. Stephen, who served two tours in Iraq, one in Afghanistan and one in Jordan, in support of Operation Iraqi Freedom, returned early from work the next day. Armed with new information, his recent change in behavior began to make sense.

When the words post-traumatic stress disorder came out, a light bulb went off.

While Stephen Comeau was comfortable with having his wife share their story, he did not wish to comment.

Post-traumatic stress disorder, or PTSD, is categorized by the American Psychiatric Association as an anxiety disorder by which a person’s memory, emotional reactions, nervous system and intellectual processes are disrupted by a traumatic encounter, or, as in the case with military personnel, multiple experiences. What was once called “soldiers heart,” “shell shock,” “combat exhaustion” and “combat fatigue,” PTSD diagnoses are based not only on the individual, but also the traumatic occurrences.

“It had never occurred to me that PTSD was what it was,” Melissa said. “I thought he was changing or this is a normal thing Marines go through. I just never thought it was anything you could label.”

The Comeaus had adjusted their lives without a word since Stephen’s return. Melissa took over driving. They stopped going to shopping malls, busy restaurants and airports in an attempt to avoid large crowds, to avoid the aggravation. Stephen found solace in the familiarity of his garage, while Melissa found comfort in Jack. The couple coexisted, each tiptoeing around the same stresses, each staying silent, each within their own prison of isolation.

“Initially, I took it really personally,” Melissa Comeau said. “When he came home I thought he would want to spend all of his time with our son and me, but when he didn’t, it hurt.”

Jack was 9 months old when Stephen deployed for the second time since he and Melissa married in 2005. When he returned to Twentynine Palms nine months later, his son had changed. He was no longer crawling, but walking and exploring new things.

Melissa was elated to have her husband home, to show him all Jack’s new tricks, to share the life together they had missed out on. After the euphoric moment of watching her husband walk off the bus, the long embrace, the reintroduction of Daddy to baby and their “once in a lifetime kiss,” the Comeau’s TIME magazine photograph moment ended.

It is an all too familiar story for the five service officers of the Veterans of Foreign Wars Post 9934 in Dana Point, who work with veterans and their families to ensure they receive the benefits that they are due.

In the fall of 1993, nearly 20 years after South Vietnam surrendered to North Vietnam, the Army-combat veteran and father of four, Bob Fowler, had changed. With sleepless nights filled with nightmares, flashbacks and anxiety, Fowler felt as if his life seemingly slipped away.

Like running full force into a wall, on January 1, 1994, Fowler’s past, long-hidden from his children and wife, presented itself.

The family returned to their Dana Point home from dinner at TGI Fridays, and Fowler, a successful businessman, sat back in his living room and lit his fireplace. With a storm raging outside, Fowler laid back for few moments and awoke in a panic. Scenes appeared outside his patio window and in an instant Fowler found himself flying through time, through the window, into a world that wasn’t there. It was the worst panic attack he had ever experienced.

Fowler made it through the night, but tremors set in and stayed for the next six months. He found himself powerless, unable to function. It wasn’t until a fellow veteran referred him to the South Orange County Vet Center that Fowler started delving into his past. Fowler began attending group therapy sessions, but was still in a state of denial.

Over the next four years, he watched helplessly as the life he had built slid down the drain. With his business gone and his home and boat sold, Fowler started a claim with the Department of Veterans Affairs, not for himself, but for his family. It would be five years before Fowler would be put on disability for physical combat wounds, exposure to Agent Orange and PTSD. But throughout the course of his claim’s lifespan, Fowler learned the VA’s system and eventually helped another veteran file his own. He hasn’t looked back since.

“It isn’t medication that does it for me, it is self-worth,” Fowler said. “Me helping a vet, that motto of nobody left behind. It may be selfish on my part, but it keeps me functioning in life. It is just payback and pay forward.”

Now, 13 years after his claim was approved, Fowler assists others navigate the VA bureaucracy, often taking veterans by the hand through the process.

He and the post’s other four service officers—Wiley Hall, Les Karr, Terry McConnell and John Van Sky—work tirelessly to build a support foundation for each compensation, pension and survivor benefit claim. They ensure each is complete with medical history, military records and supporting evidence, in order to receive a successful outcome.

And over the last decade, the men have experienced victory, with their estimated 900 claim filers, including soldiers, airmen, sailors and marines, receiving more than $28 million annually in compensation.

The five Vietnam Era veterans have all experienced some degree of disability, and since they began helping veterans file claims, they have seen a significant increase in the number of PTSD related ones. Unlike when they returned, they said, this generation of post-9/11 veterans face an immediate need for help. For years, Fowler buried himself in work, but now veterans are returning home to unemployment.

According to May figures from the U.S. Department of Labor, those numbers for all veterans are down to 6.6 percent, from the 7.8 jobless percentage recorded the same month last year. With veterans employment numbers steadily increasing since 2011, the service officers credit increased awareness on the traumatizing effects of combat with their rise in PTSD claims. The mental health claims, they said, are harder to prove and take more time to process, than those for physical wounds.

The VA had about 900,000 disability claims pending nationally in July of last year, with nearly 30,000 of those coming from the San Diego Regional Office. In their experiences, the service officers said claims can take anywhere from six months to a couple of years to be decided on, and that they personally remain with veterans throughout the process. The men of Post 9934 said they hope their individual combat and VA claims experiences can help other veterans and active duty personnel seek treatment sooner.

“When we come home from the service, and we get back and try to find our way back into society, we don’t realize that we do have PTSD and it is defining our character, our personality. We just think that is the norm and somehow we function with that.” Fowler said.

“Veterans with PTSD have been CEOs of Fortune 500 companies, they are not disabled and not contributing,” Fowler said. “But at some point in time, some earlier than others, it creeps up on them.”

Comeau considers her family one of the lucky ones. Stephen entered therapy while stationed at Twentyine Palms, and after his eight-week program ended, Stephen was cleared and told he was cured. But when the Purple Heart recipient started forgetting tasks he had done a hundred times over and his symptoms ceased to improve, he found himself in a intensive outpatient program.

Once the gate was open, his wife said they just had to keep going.

Stephen was transferred to the Marine Corps’ Wounded Warrior Battalion—serving ill, wounded and injured active duty Marines—and voluntarily entered into a 10-week inpatient hospital program. Melissa made weekly trips from Dana Point to the San Diego facility to attend group therapy sessions with her husband, and said the experience helped them both open up.

“He is like me and is willing to do anything to get back to who he was,” Comeau said. “He would do anything to learn how to deal with it, anything that will help with the symptoms.”

Now with a special PTSD service dog, Stephen and Melissa are rebuilding from the ground up and making plans for their future, in civilian life.

“PTSD is terrible, but at least we, unlike other families, have the opportunity to make a new normal,” she said.