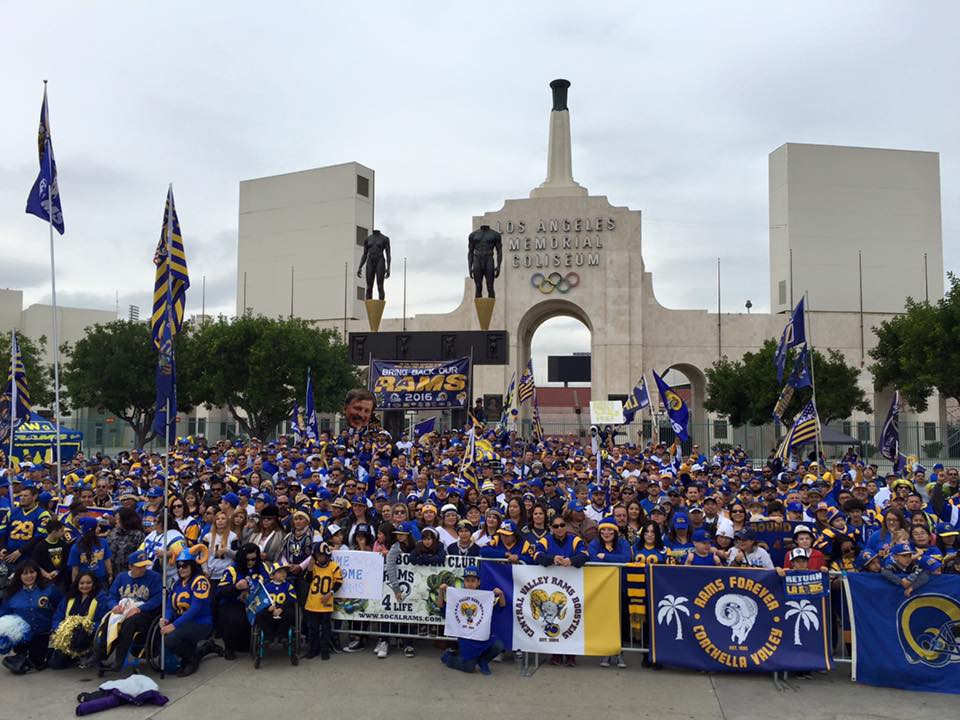 Column: Finally, We Get An NFL Team … But Will We Embrace Them?

Are you ready for some football?

For many in Southern California, excluding those in the San Diego area, that answer is, and has been, an emphatic ‘Yes’ for some time.

The Los Angeles Rams, formerly of St. Louis, are returning home thanks to team owner Stan Kroenke and his relocation initiative that was approved by NFL owners in a 30-2 vote last week. Kroenke plans to build an estimated $2.6 billion, 298-acre state-of-the-art stadium and entertainment complex on the grounds of the old Hollywood Park racetrack in Inglewood by 2019, right next door to The Forum.

And while the Rams are set for a triumphant return home, I can’t help asking myself, ‘Will we embrace them?’. My gut says yes, we eventually will, but I’m left with a feeling in the back of my mind that it will not be easy to win everyone over. I know for a fact that it’s too late for me.

I was 6 years old when the Rams left town for St. Louis. With no NFL team nearby, the NBA and MLB reigned supreme in my world. Kobe, Shaq, Piazza, Mondesi, Karros, Hearn and Scully were the names, voices and faces of Los Angeles sports to me. The NFL, while always on my radar, remained a blip in the distance. My friends and I filled the football void, instead, by watching the Trojans and Bruins duke it out on Saturdays.

The life of a now 20-to-30-something Los Angeles-area football fan has been a weird one. Rumors of a team returning to L.A. swirled around me from the time I learned how to ride a bike, when I got the keys to my first apartment and up until the first time I had to pay for health insurance. Talk about a longtime tease. We have been kept waiting in the wings, watching other cities and franchises have all the fun.

As a result, the area’s football allegiances have turned into a giant melting pot. There is a large, local camp of San Diego Chargers fans (who might get a belated Christmas gift if the team announces it will join the Rams in L.A. in the near future), and then there is everyone else. Southern California is home to plenty of Raiders and San Francisco 49ers fans and I see Patriots jerseys and Packers cheeseheads emerge every January when the playoffs roll around.

While there are many native Angelinos, the vast sprawl of Los Angeles County is full of transplants from all across the nation. When I tune in to watch the Rams play in the Los Angeles Memorial Coliseum next season for the first time, my fear is seeing a large swath of visiting fans cheering for the 49ers or Seahawks, not the home team.

I may sound jaded, but can you blame me? Living in NFL limbo is not exactly a fun spot to be in.

It may be too late for me to fully embrace these Rams, but there are two key demographics the team needs to tap into if they are to become the darling of the Southland: the very young and those who remember.

There is a sizeable and loyal fan base of Rams fans over the age of 30 who felt betrayed when the team up and moved to St. Louis in 1995. Some still hold a grudge against the franchise for skipping town 21 years ago, but many, based on the outpour of emotion and positivity online, seem to be happy that the team is back.

I asked my dad, a disenfranchised Rams fan, what he thought about the team returning to L.A. He said the people of his era would be eager to welcome the Rams back into the fold and hopes the franchise can build on its L.A. tradition.

There is no doubt Kroenke’s endeavor will make money hand over fist. The Los Angeles market, the second largest in the nation, has been starved of the country’s most popular sport for two decades. Once Kroenke builds his massive Kubla Kahn of a stadium/entertainment complex, the people will come.

But if the franchise wants to fend off the army of visiting fans that is sure to invade its territory in the coming years, as well as plant new roots of its own, then the Rams need to capture the attention of the Los Angeles-area youth. It’s too late for my generation to get swept up by this team, but youngsters from Los Angeles to Orange County will have a chance many of us missed out on to have a team they can confidently call their own.

They will get to see those brilliant blue and gold uniforms take the field on Sundays with a clean slate and with fresh eyes. Many will grow up knowing only the Rams, and possibly the Chargers too, and L.A. football.

Which is why it is important for the Rams to win and win soon. The team has been mired in mediocrity for years. The Rams have compiled a 50-109 overall record with zero playoff appearances over the past 10 seasons. A huge part of the Rams’ ability to succeed with the fans in L.A. will be their ability to capture the attention of the kids, re-capture the trust of the bitter ones and honor the devotion of the diehard holdovers. The best way to do that is simple: by winning.

After all, they will be playing in Los Angeles, and there is nothing that market loves to do more than embrace winners.

Steve Breazeale is the sports editor of the Dana Point Times. He is still slightly bitter that both the Raiders and Rams left town when he was in first grade.