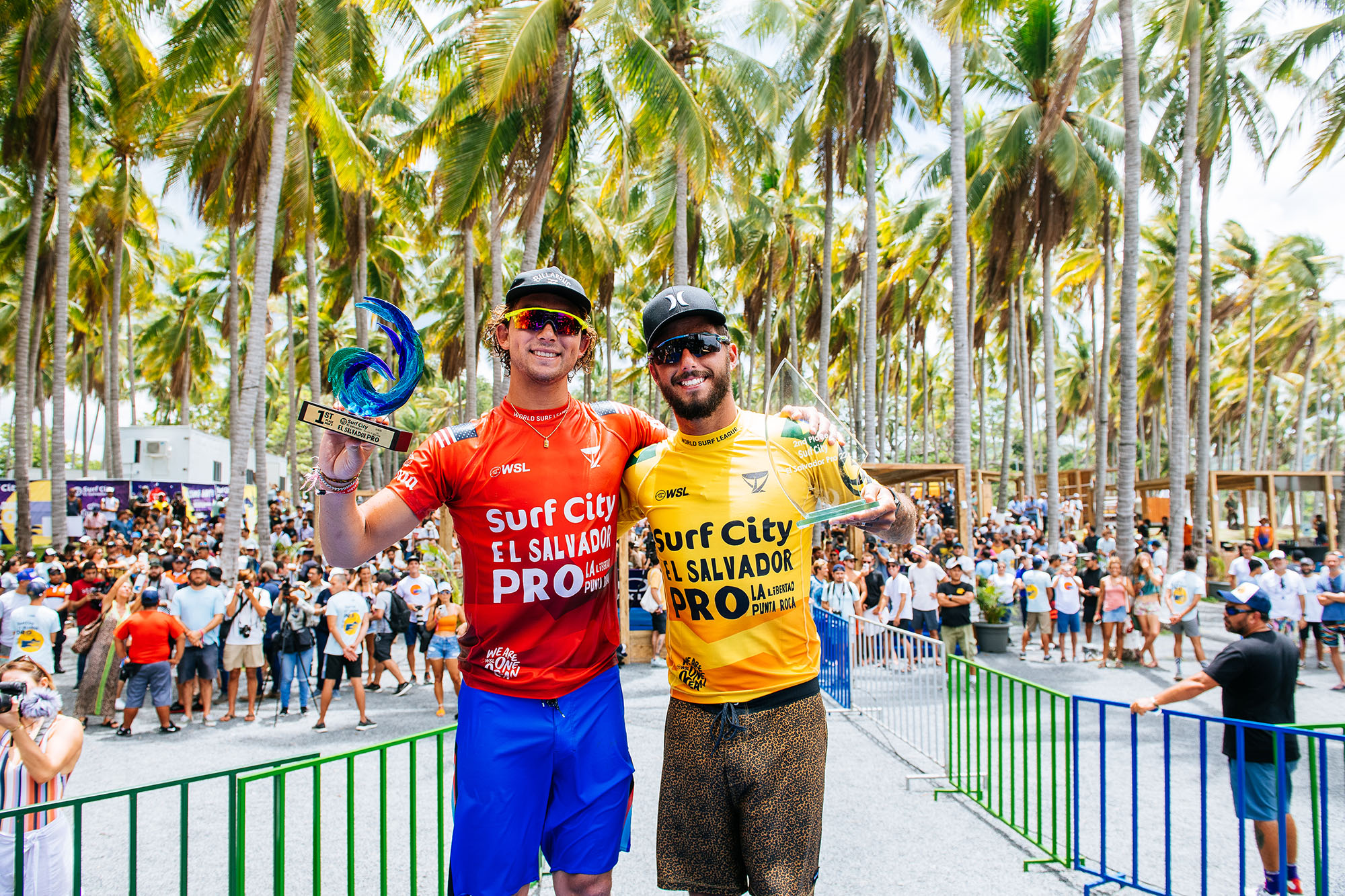 With time flying off the clock, San Clemente’s Griffin Colapinto showed he can thrive under pressure

It was a San Clemente dogfight down in El Salvador, as Griffin Colapinto barely edged out Filipe Toledo to earn his second victory of the WSL’s 2022 Championship Tour season.

Held in rippable, 3- to 5-foot surf at Punta Roca—a right-hand point that shares a lot of similarities with Upper Trestles—the battle for the Surf City El Salvador Pro went down to the wire, as the Final between Colapinto and Toledo was tied going into the dying minutes.

Stalking the lineup, with three minutes left on the clock, Colapinto scratched into a diamond in the rough and went haywire. When the spray settled, the judges awarded him with an 8-point ride for the effort, as he put his all into the performance. It was enough to vault him into the lead.

“It’s so crazy,” said Colapinto afterward. “I was so baffled we were tied. I was just thinking, it can’t end this way, I have to figure it out, and comeback performances are what I dream of, so if I’m in that position, I just love it.”

“Filipe and I have had some bouts; he got me at G-Land, so I’m psyched to get him back here, but he’s been surfing so good,” Colapinto continued. “This Final feels better than Portugal, so I’m just soaking it in.”

The win moves 23-year-old Colapinto four spots up the WSL leaderboard, and he now is ranked third in the world with three more events to go.

The top five surfers at the end of the regular season will earn a spot in the Rip Curl WSL Finals, which will be contested at Lower Trestles this September and decide the 2022 world champion.

If he can hold and make the cut, Colapinto is looking at the very real possibility of making his wildest surfing dreams come true right here in his backyard.

Meanwhile, Toledo is ranked No. 1 in the world and has his eyes on going into the Rip Curl WSL Finals wearing the yellow leader’s jersey.

The men’s Final lit up Punta Roca from start to finish with a toe-to-toe battle between Colapinto and Toledo. Toledo applied pressure right out of the gate with a near-perfect 9.57 (out of a possible 10) before Colapinto responded in commanding form to earn a 9.00 of his own.

The battle of the backup scores then unfolded as Toledo garnered a solid 6.43 while Colapinto answered again with a 7.00 to make it a tie, with the edge going to Toledo for his higher single-wave score.

But, with three minutes remaining, Colapinto found a gem under priority and threw everything into it to earn an excellent 8.00 and his second career CT victory.

“I feel great. I feel humbled to be in the position I’m in,” Toledo explained after his final with Colapinto. “It’s been quite a fun year, and it feels nice to go back to Brazil and recharge my batteries and try to win again. There’s a lot of work to do, but so far, so good. I’m stoked; so blessed to be here, and thanks to my family—happy birthday, Mom—and thank you to my team for supporting me.”

On the women’s side of the draw, it was point break master Stephanie Gilmore taking the win over Santa Barbara’s Lakey Peterson. Like Colapinto, Gilmore moved four spots up the leaderboard and now is ranked third in the world.

With seven world titles to her credit, she has now carved out a path to a record-breaking eighth title. She competed in the inaugural Rip Curl WSL Finals last year with mixed results. If she can build on this momentum, we may see history made on the Lowers cobblestones.

Up next on the schedule is the Oi Rio Pro in Saquerema, Brazil, which will take place later this month. The Championship Tour will then head to Jeffreys Bay, South Africa in July before concluding at Teahupoo, Tahiti in August.