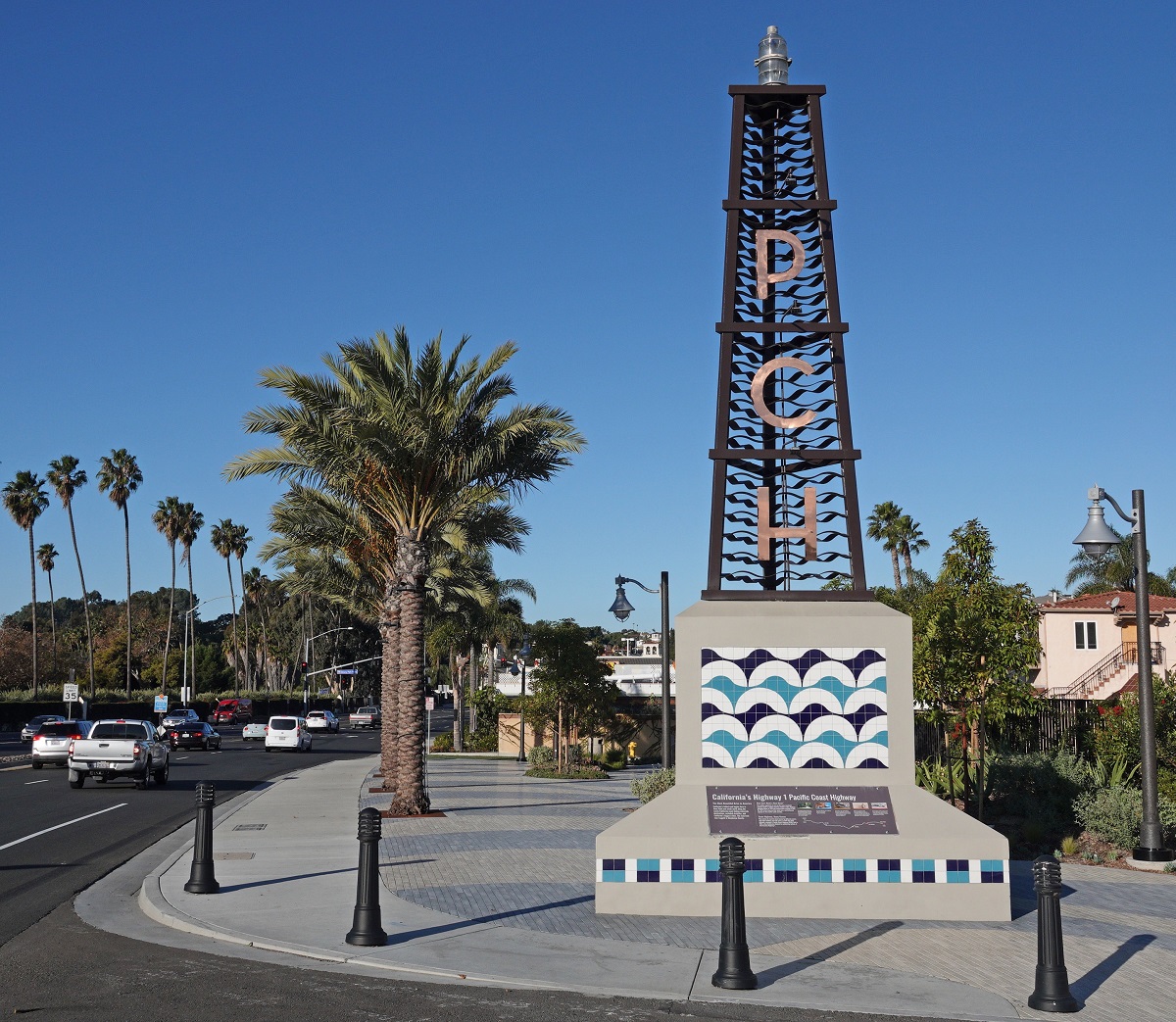 One of our area’s best-kept secrets is a historical marker celebrating California Highway 1.

If the monument in Dana Point were better known, it could become a selfie destination for many fans of the scenic coastal drive.

The monument is a 31-foot-tall tower spelling out PCH in golden letters.

“The Most Beautiful Drive in America,” a storyboard proclaims.

In a car, it’s easy to zip by without noticing.

Most people who pause to read three historical display panels are bicyclists and pedestrians who discovered the monument while plying PCH’s sidewalk or San Juan Creek’s nearby trail.

If it comes as a surprise that Dana Point is the starting point for PCH, don’t fret.

California history produced two Pacific Coast Highways—federal and state. U.S. Highway 101 was designated in 1926 as a route from the Mexican border to the Canadian border, known as Coast Highway through much of San Diego County and into Orange County through San Clemente.

The PCH that Dana Point’s tower immortalizes began at the Capistrano Beach curve. That PCH was known earlier as U.S. 101 Alternate.

People driving north on 101 from San Clemente could continue inland on 101 to L.A. or turn onto 101A at the curve to take the coast. The left turn would take them beneath a railroad underpass that today allows only southbound traffic.

A second underpass—near what is now the entry onto Highway 1 from Doheny Park Road—used to place Highway 101 traffic coming from San Juan Capistrano onto 101A.

As Dana Point’s Highway 1 monument states, “The sudden popularity of cars in the early twentieth century meant a sudden need for reliable roads. Highway planning began in 1919 and construction started in 1921. By 1937, crews hung up their pick-axes, and California opened its first north-south corridor.”

What would become Highway 1 was built in segments. Dana Point’s was completed in 1929. In 1926, El Heraldo de San Clemente already was boasting that San Clemente was “wonderfully blessed” with highway access to both Los Angeles and San Diego—what became known as Highway 101.

“The road is only called PCH in Orange, Los Angeles and Ventura Counties,” the storyboard says. “North of Ventura, people use its alternate name: California Highway 1.”

At its inception in 1926, Highway 101 in San Diego County wasn’t a single road. The San Diego Union Tribune, researching the road’s origins, found that route planners cobbled together a  patchwork of existing roads—some paved, others not—to post with 101 signs so drivers could navigate their way from Tijuana into San Diego, La Jolla and on up to Los Angeles.

The 101 evolved into a single, major road.

Construction of Interstate 5 in the 1950s-1960s replaced Highway 101 with a freeway in San Diego County and Orange County. Today, you have to drive I-5 into Los Angeles to commence traveling north on the 101 Freeway.

San Diego County is proud of “Historic Route 101.” Historical signs adorn the roadway between Del Mar and Oceanside. The website sandiego.org has a Historic 101 page, promoting each beach town and its tourist delights.

In San Clemente, old Highway 101 was always known as El Camino Real. Today, you can find at least two replica bells in San Clemente that reflect how historic Highway 101 generally followed the path of the Spanish king’s highway, which after 1769 linked a chain of missions started by Father Junipero Serra.

One San Clemente bell is on a sidewalk south of Tommy’s Restaurant. The other is outside Sit & Sleep. Don’t be confused by the city’s mission-style street lamps beside it. The replica bell looks much older, has a historical inscription and has no lamp.

Dana Point’s PCH monument displays three panels: one about Highway 1; one about indigenous people, town namesake Richard Henry Dana and other local history; and one telling the story of a landmark Richfield tower that stood nearby, 125 feet tall, from 1928 to 1971. Today’s PCH monument is a miniature version.

The original tower, the monument says, was one of 36 that Richfield Oil erected at roughly 50-mile intervals from the Mexican border to the Canadian border. Motorists could always know a Richfield station was ahead. Atop each tower, a powerful beacon light also helped aviators find their way at night.

At least two former Richfield towers still exist—at Mount Shasta and at Willows, Northern California. The bold neon lettering “Richfield” is long gone. The Mount Shasta tower still says MS at the top, alerting aviators which tower they were overflying. The Willows tower presumably once had a big W.

Dana Point businessman Richard Deffenbaugh preserved the beacon light in 1971 for posterity. In 2014, he donated it to the Dana Point Historical Society, which displays it in its visitor center at city hall.

Design-wise, Richfield’s beacon stations in California were uniform—Spanish—from Palm City (just above Tijuana) north to Willows. Beyond that, stations had an alpine design. At Paso Robles, a small Spanish building identical to the onetime Willows and Capistrano Beach Richfield stations still exists. It’s a bus stop. The Willows building is a trucking company.

California 1, which recently turned 90 years old, runs from Dana Point north to Oxnard, merging there with 101. Highway 1 recurs near Lompoc, then branches off from 101 at San Luis Obispo for the most celebrated stretch, to Big Sur and to San Francisco. There, 1 merges with 101.

Motorists can choose Highway 1 north of San Francisco as a scenic alternative to 101, plying the rugged Mendocino coast to Leggett, where Route 1 ends by intersecting with 101.

Dana Point’s monument to Highway 1 isn’t likely to ever match the tourist allure of a landmark road sign in Key West, Florida. Hordes of tourists pose for selfies where U.S. Highway 1 starts its run from the Florida Keys to the Canadian border.

But for road trip fanatics who cherish California’s scenic Highway 1, a pilgrimage to Dana Point’s PCH monument is well worth the drive.

Fred Swegles is a longtime San Clemente resident with nearly five decades of reporting experience in the city. Fred can be reached at fswegles@picketfencemedia.com.