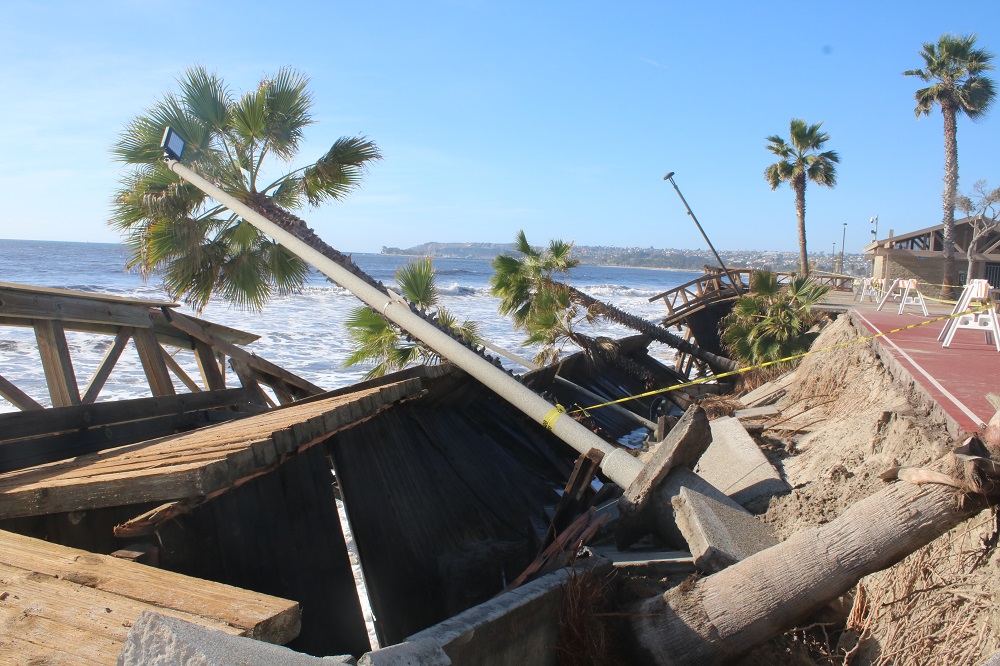 Cleanup and Planning in the Works for Capo Beach

Crews with OC Parks have begun the cleanup process at Capistrano Beach after weather damage and high surf resulted in the collapse of its boardwalk and steps.

Capo Beach and its parking lot have been closed due to weather damage as of Friday morning, Nov. 30. A portion of the boardwalk and steps collapsed due to high surf on Thursday, with further damage seen the next day. An OC Parks employee said on Saturday, Dec. 1 that people who cross the yellow tape will be cited. OC Parks is the agency overseeing the beach’s cleanup and stabilization.

“We will not have any damage estimates or timelines until we are able to get an engineering assessment done,” Marisa O’Neil, a spokesperson for OC Parks, said in an email.

No citations have been issued yet, and the agency asks the public’s cooperation in staying out of the area for their own safety.

Crews started removing debris on Tuesday, Dec. 4. OC Parks had been awaiting utilities clearance, which had not been received until the end of Monday, Dec. 3.

“The focus is clearing debris and hoping to do as much as possible to stabilize the area where the basketball courts and restrooms were prior to the upcoming storm and high tides. Long-term planning and assessment will take more time, so we don’t have any estimates on that yet, or when it will reopen to the public,” O’Neil said.

In a Dana Point City Council meeting on Tuesday, Dec. 4, Councilmember Debra Lewis addressed the destruction at Capo Beach and asked city staff what was being done.

“We are aware of the situation, and we have reached out to OC Parks,” said Dana Point City Manager Mark Denny. “They’ve said they’re in the process of putting together a long-term plan. We have spoken to OC Parks to let them know we’ll support them in any way they need.”

In an email, O’Neill also added that because long-term planning and assessment will take more time, there are no estimates on that yet, or when it will reopen to the public. O’Neill said the County filed an emergency permit with the California Coastal Commission to stabilize the damaged area with a rock wall, also known as “riprap.” The OC Public Works on Wednesday, Dec. 5 used heavy machinery to begin placing 1,000 tons of rocks along the stretch of beach that collapsed last week.—Lillian Boyd