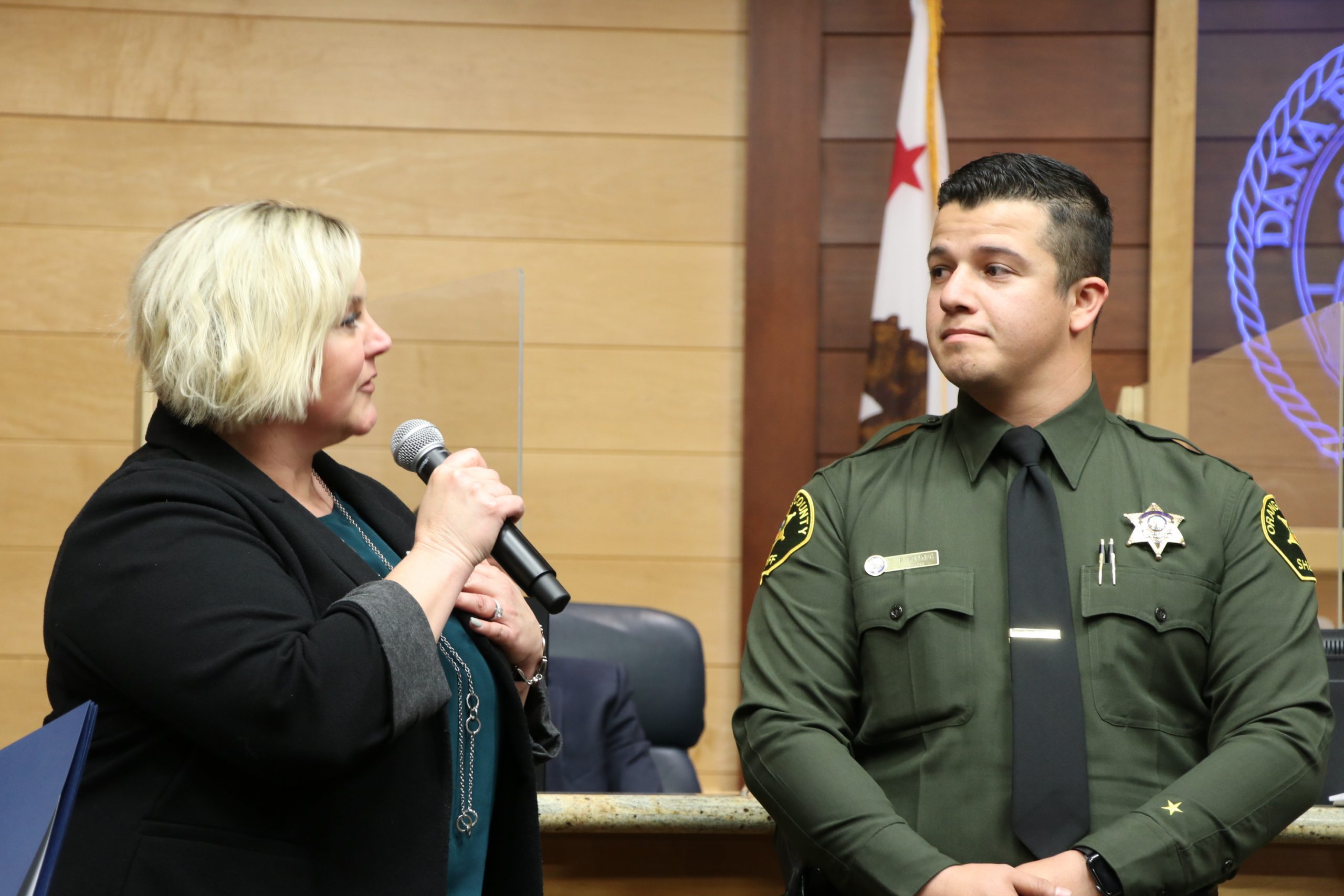 Sheriff’s deputies and firefighters on Tuesday night, March 19, gathered at the City Council chambers, where three of Dana Point’s first responders were recognized by the city and local Veterans of Foreign Wars chapter for their service to the community.

“Every year, we get to do this at the City Council chambers, where we as an organization, the VFW and the city get to honor our first responders,” Councilmember Richard Viczorek said. “And we have the best in the country; I put them up against anybody.”

Recinos, Viczorek explained, grew up in Orange County, graduating from Anaheim High School in 2009. He attended California State University, Fullerton, which is where his interest in law enforcement began.

From 2009 to 2015, he served as a cadet in the Anaheim Police Department before joining the department in an official capacity in 2015. The next year, he joined the Orange County Sheriff’s Department, and has been assigned to Dana Point Police Services for the past three years.

Viczorek highlighted an incident from March 2020, when Recinos displayed heroism. A male citizen, according to Viczorek, had suffered a traumatic medical issue while driving along Doheny Park Road.

“The vehicle rolled through the stoplight and hit a curb before coming to a rest,” Viczorek said. “Citizens and deputy Recinos attempted to assist the man and saw he was in distress. Deputy Recinos and his partner performed several rounds of CPR, which successfully resuscitated the man.”

Wayne Yost, VFW District 2 senior vice-commander, said it was first responders like Recinos who contribute to Dana Point being a “7-square-mile of heaven.”

Dana Point Police Chief Capt. Kirsten Monteleone showered Recinos with additional praise, stating that whenever she, the department and the city need something done, “he’s the first guy to answer up and say, ‘I can do this.’ ”

Recinos thanked his family for their support and his upbringing, and also thanked his supervisors in the department, crediting them for constantly pushing him “to be a better person and make better decisions.”

“Anybody with that type of dedication and longevity obviously is a quality person, and that’s the type of people we have been blessed to have serve our community,” the councilmember said.

Rob Capobianco, division chief for the Orange County Fire Authority who’s known Vanderstelt for 25 years, praised the honoree for his leadership and integrity, as well as the way he trained and mentored firefighters over the past 30 years.

While joking that he could talk forever if given the chance, Vanderstelt quickly acknowledged that he’s been blessed to serve in South Orange County for most of his career and was able to retire out of Dana Point’s Fire Station 30.

“It’s a wonderful community, a great people, great partners on the law enforcement side,” he said. “I’ve been blessed, I couldn’t be happier and more excited to go into retirement.”

Vanderstelt also explained that he’s recently started riding with a motorcycle club for firefighters who participate in charity rides. Last weekend, he said, the club rode with a similar club of combat veterans, raising $20,000 for veteran charities.

Rounding out this year’s honorees by spotlighting Chen, Viczorek noted that as a reservist for the U.S. Marine Corps, he has a special spot for fellow reservists such as Chen.

“It’s important to let people know that this is not his everyday job; this is something he does to augment the active-duty firefighters,” Viczorek said. “It’s a difficult thing to do when you have a regular day job, you have family, you have interests, you have hobbies, and yet you still find time to serve your community. So that’s why we appreciate reserve firefighters so much.”

Chen has worked out of the Dana Point Fire Station since 2019 and recently completed his OCF operator course, according to Viczorek, who again stressed that “this is on top of his regular job before he goes and does his job as a reserve firefighter.”

Similarly, Yost praised Chen for donating his time as a reservist, stating, “It takes a special person that is dedicated not only to his job and his family, but then also volunteers to go above and beyond to serve the people of his community.”

Capobianco said it’s always a welcome sight whenever the department gets a reservist like Chen, whom he described as well-educated and motivated.

“He hasn’t been with us long, and he’s already making an impact,” the fire chief said of Chen.