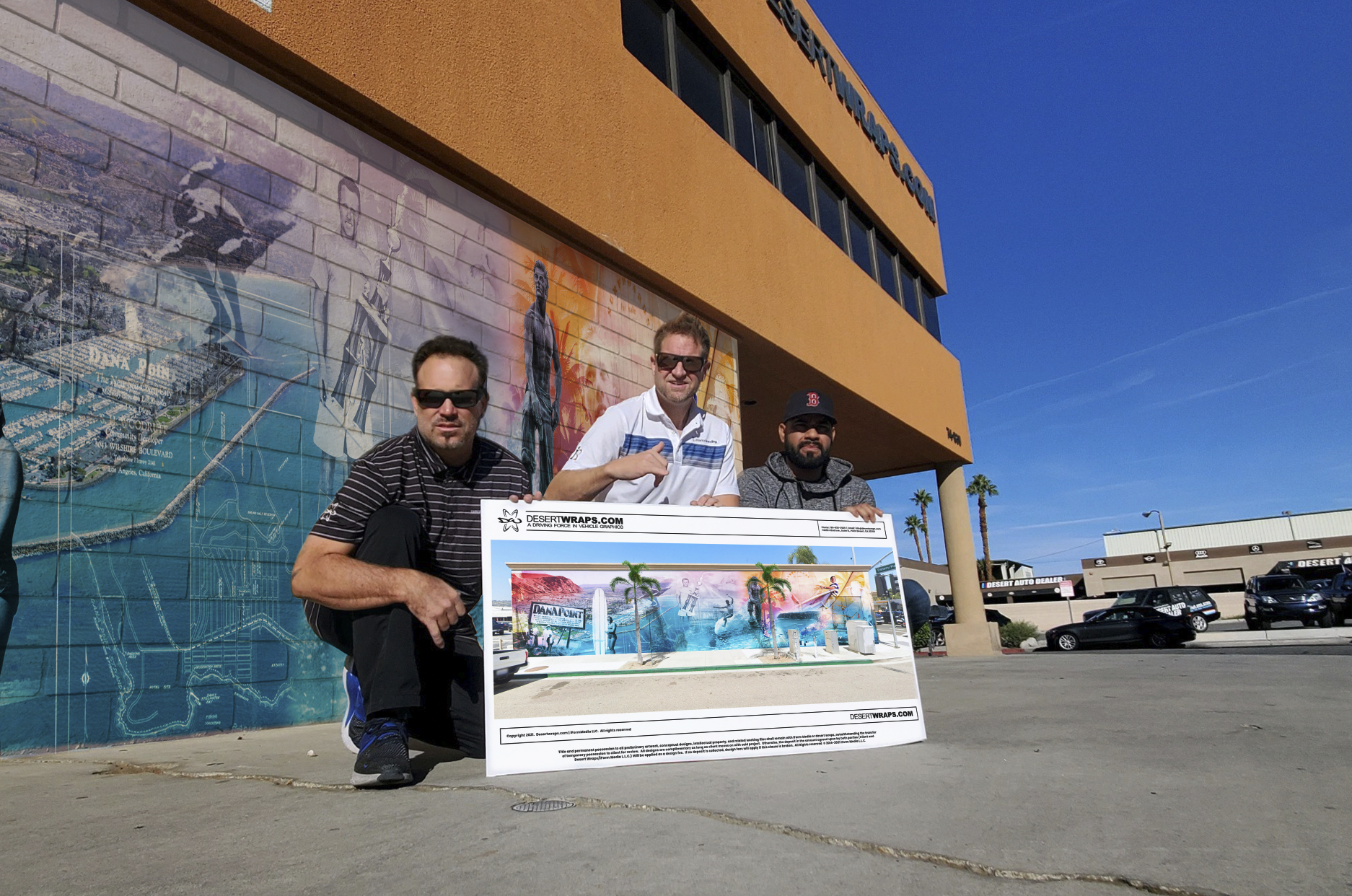 When a group of graphic artists who grew up together in Dana Point first heard that the city was commissioning a mural project for Doheny Village last year, they jumped at the chance to capture the city’s history through surf pioneers and local landmarks.

“We wanted to show the progression of changes from the founding of the city of Dana Point.  The original founding families that built the community from PCH to the Lantern streets, the homes, the hardware store, the gas station,” Soterios Anagnostou, owner and art director of Interior Branding, told the Dana Point Times.

This past summer, the city’s Arts and Culture Commission chose the mural design submitted by Anagnostou company Interior Branding, an agency that designs and creates branded graphics for industry space.

The mural depicting local surf legends and Dana Point landmarks is set to be unveiled on Thursday, Feb. 24, on the corner of Doheny Park Road and Las Vegas Boulevard, where the city will hold a ribbon-cutting ceremony.

Anagnostou, along with Joe Rich Grew, Interior Branding’s operations officer, and their friend Hung Tran, all grew up in Dana Point. Tran heard about the Doheny mural and told Anagnostou he should submit a design.

Admittedly, Anagnostou explained, the group of friends barely made the city’s due date to submit designs, turning their concept in within 24 hours of the deadline.

But working together, Anagnostou said Tran helped to research and source photos and content, while Cody Evans, operations manager for Interior Branding, also helped to coordinate the project.

The mural, Anagnostou described in an email, is “a mosaic collaboration of two childhood local friends who grew up in Dana Point with the rich history and diversity from San Clemente to Laguna Beach.”

Just as they set out to do, they captured the history of Dana Point by including homages to legendary names in surf, as well as references to local landmarks, and honors the city’s namesake, Richard Henry Dana.

“We want to recognize the families that created the beach community of Dana Point and their historical significance, as well as the continued story of propelling the aquatic culture of sailing, surfing, skateboarding, with world-class surf products and apparel,” Anagnostou said in the email.

Interior Branding wanted to make a mural that would showcase what makes Dana Point unique. The team hoped to create a mural that locals could be proud of and where visitors could learn of the “rich history and talent that sprang from” this coastal town.

“Dana Point and its immensely rich history and culture has forever been embedded in all of us who have had the pleasure to experience all that the community has offered for its residents and visitors alike,” Anagnostou wrote.

The 16-foot by 80-foot, vinyl-wrapped mural is expected to last at least five years with little fading or maintenance.

The Arts and Culture Commission will hold the ribbon-cutting ceremony for the Doheny Village mural next Thursday at 3 p.m. The city will offer free refreshments during the mural unveiling.