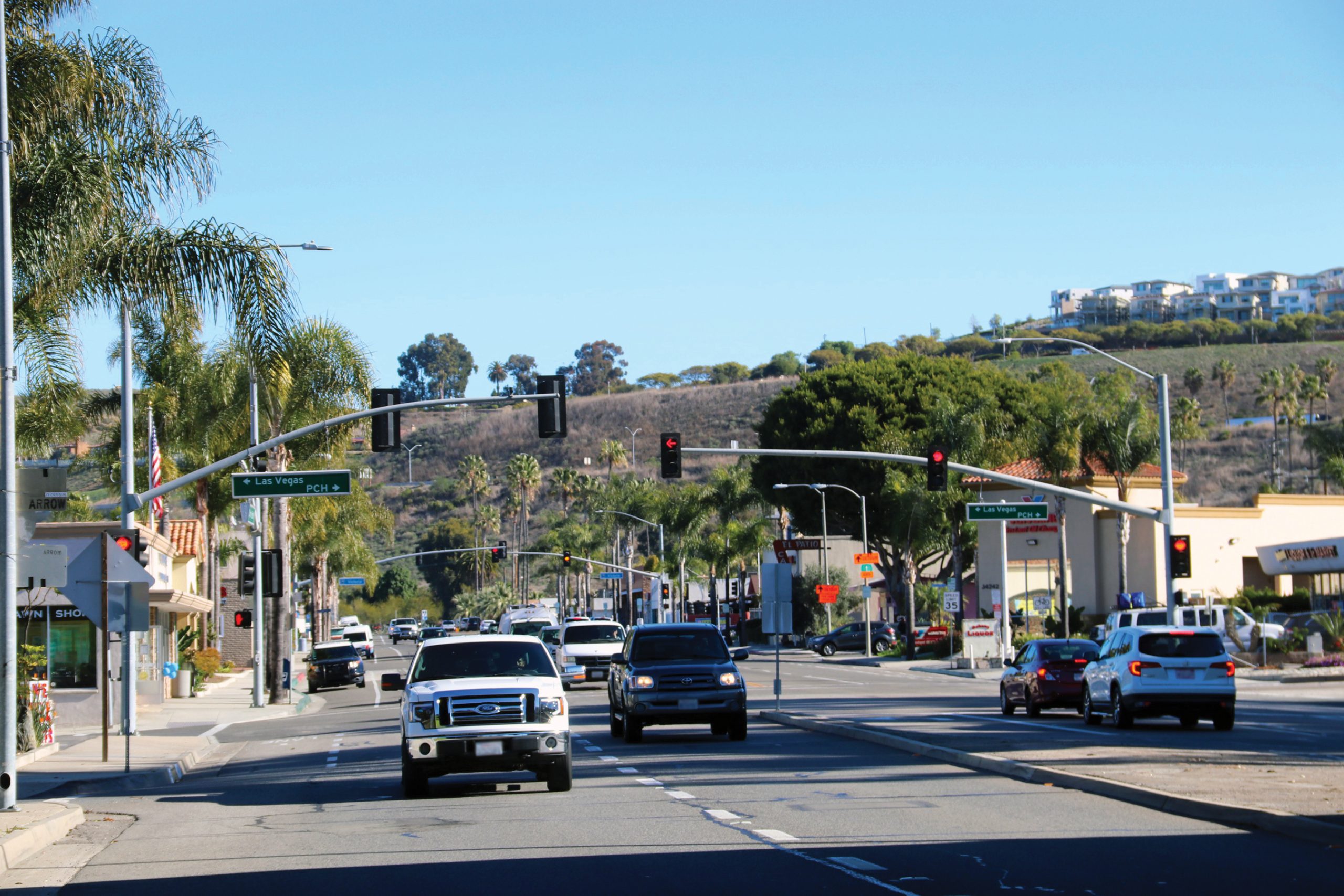 City to Plan for Beautification, Financing Connectivity in Doheny Village

Dana Point city staff have been given direction to begin budgeting for connectivity improvements in Doheny Village, and the city’s Arts and Culture Commission was signaled to assist in beautification efforts—bringing the district one step closer to the grand scheme of its revitalization.

On Tuesday, Feb. 16, Dana Point City Council heard a presentation on the Doheny Village Plan. While staff recommendation was to receive and file the update, a motion to budget and propel beautification forward was passed unanimously by council.

Efforts to create an updated plan for the Capistrano Beach neighborhood were first initiated in the late 1980s. But the Doheny Village Merchants’ Association (DVMA) did not form until 2016, out of concerns for a proposal on parking, zoning and development standards in the Village set forth by ROMA Design Group.

In October 2017, city staff re-initiated a public engagement process to involve DVMA before council directed staff to continue meeting with the association as a working group the following year.

Since the Working Group’s formation, City Senior Planner Belinda Deines says there have been 20 meetings, which have included roundtable discussions on land uses and development standards.

“Even in 2020, the group transitioned to virtual meetings for proposed updates and changes to the plan,” Deines said. “It’s important to note that the incorporation of public input into these draft documents has been the foundation every step for this entire process.”

So far, the Working Group has determined its standards for development, parking, uses, zoning and beautification, with reviews and updates along the way.

“What is the Doheny Village Plan today? My answer is that it is the new and improved plan for zoning and public spaces,” Deines said.

The draft chapter proposes to legalize existing nonconforming uses and modify development standards to meet the existing pattern of development that had been previously approved under County of Orange jurisdiction, which was implemented before Dana Point became a city in 1989. As a result, these changes will likely spur both small- and large-scale redevelopment in the area, Deines said.

A draft zoning map establishes three new zoning districts within Doheny Village. Purple denotes “village commercial,” which allows for mixed use, light industrial and commercial uses, where industrial uses had not been allowed since 1989. Red denotes “Village Main Street,” which includes properties that front Doheny Park Road—where there are some existing properties with residential upper floors. This would allow for mixed use rather than the existing zoning standards for big-box retail. Brown denotes “commercial residential,” which allows for horizontal mixed use, which means there could be commercial or residential.

“Currently, residential uses are only allowed as an accessory to primary commercial or vertical mixed use,” Deines said. “Existing residential properties wanting to improve and expand are limited due to nonconforming status.”

There are currently no proposed changes to the community facilities and zoning districts. Deines did, however, acknowledge the recent initiation for a separate specific plan at the Capistrano Unified School District bus yard on Victoria Boulevard.

Earlier this month, council approved for Toll Brothers, a housing construction company, to study the environmental impacts of a proposed apartment complex at the bus yard, at the company’s own expense.

As far as next steps in updating the zoning code, it is anticipated that a draft environmental impact report (EIR) will be brought forth to the city’s planning commission for review and city council approval by summer 2021. Upon approval, the proposal would then be submitted to the California Coastal Commission.

Deines reiterated in her presentation that state funding would cover $160,000 of EIR costs because of the project’s contribution to the city’s housing goals. But funding would be contingent upon the Coastal Commission’s approval no later than June 2022.

Capital Improvements to the Village

Rather than develop a formal beautification plan, Deines said the group sought to enhance aesthetics by proposing public art, lighting and landscape programs to be implemented right away.

“The group formed a Village Beautification Committee to work on short-term projects,” Deines said. “They’ve presented concepts for potential public spaces and industrial-inspired sculptural art. We identified potential locations for mural art and color to bring interest and dimension to the area.”

But the highest priority for the Working Group recommendations is to enhance pedestrian and bicycle connectivity from Doheny Park Road to Pacific Coast Highway, essentially connecting Doheny Village to the beach.

In August 2020, a preliminary design received approval from Caltrans and was adjusted slightly in the past month to coordinate with a planned OCTA/Metrolink double-tracking project. City staff is preparing a Request for Proposal (RFP) for design services, which will be brought to the city council for budget consideration this year.

According to Matthew Sinacori, the city’s public works director, it is anticipated that project construction will rely on coordination with potential grant funding opportunities. However, the price tag is unclear at this time.

“I’m working on what those numbers would be, but I’m thinking a range of $400,000 of Doheny Village beautification money already set aside for this area,” Sinacori said. “Once the design gets moving forward, the intent is to request grant funds to build the project.”

The next step, Sinacori said, is to issue a Request for Proposal for design services in order to seek outside grant funding. He added that city staff has prioritized that effort to be completed in the second or third quarter of 2021, with the plan to bring a contract for design services to the city council by year’s end.

Responses and Reactions to Village Update

Other residents expressed concern for the bill.

“I am concerned that there is no funding assigned for this or any of the capital improvements contemplated in the plan,” said Toni Nelson, a Capistrano Beach resident. “I am hopeful that the city’s finances will improve as the effects of the pandemic start to recede, that grants will become available or that developers will be asked to contribute to the needed infrastructure improvements.”

Nelson added that she was pleased to see improvements in Doheny Village in terms of lighting, landscaping and beautification.

“All these improvements not only make the area more attractive, but they demonstrate that Doheny Village is an integral part of our community that deserves the high level of care and attention enjoyed throughout Dana Point,” Nelson said.

Mayor Jamey Federico motioned to direct staff to budget for the design of the Doheny Village connectivity project and to direct the Arts and Culture Commission to assist “however staff needs them to assist in moving the beautification projects forward.” Council unanimously approved.

Currently, the Doheny Village Plan is underway with environmental review of the draft Zoning Code Update.