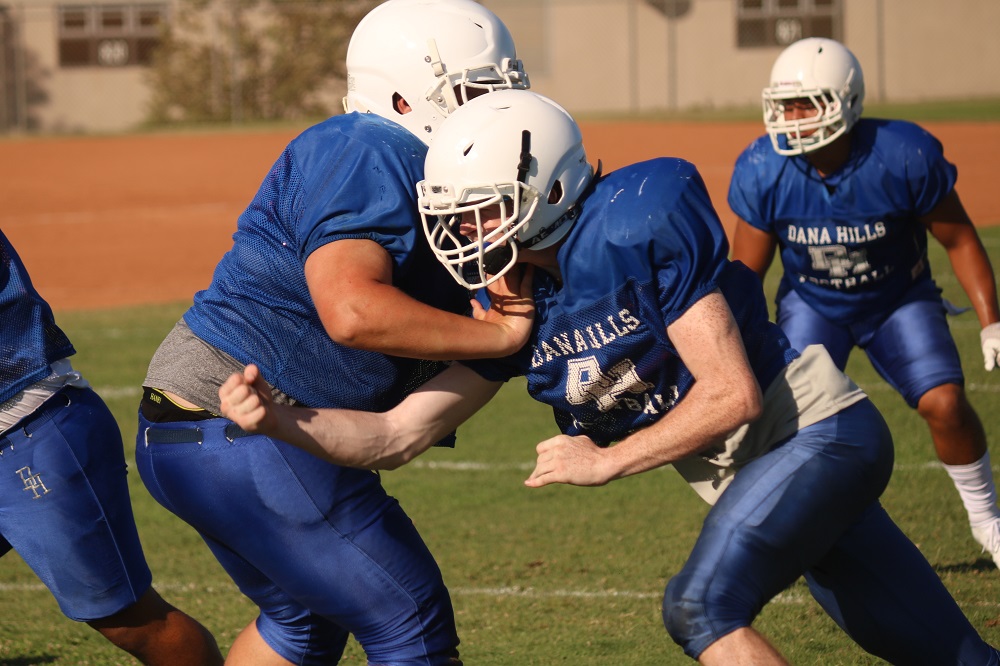 ‘Chip on the Shoulder’: Dana Hills Football is On a Mission to Flip Perceptions, Continue Run of Improvement

A football team is one of, if not the, most prominent representatives of a high school.

It’s where a community rallies on a Friday night. It’s where a student body kicks off their fall dances. It’s usually a symbol for what the school is and sets the tone for the upcoming year.

So what is it like when the football team feels looked down on or disrespected by the student body it represents?

The Dana Hills High School football program knows, doesn’t like it and is on a mission to turn that around this season.

“There’s a chip that I have on our shoulder with the whole attitude our school has toward the program,” junior quarterback Zackary Saavedra said. “I have to prove people wrong, and so does everyone else here. It’s how we’re going to work here.”

Dana Hills hasn’t had a .500 season or made the playoffs since 2013 and hasn’t won more than five games since 2009. Since that 2013 playoff appearance, Dana Hills has won just five games.

Dolphins coach Phil Skinner took over as head coach in 2015, and there has been tangible improvement.

“The success has taken little steps,” Skinner said. “We went from no wins to one win to three wins. Obviously, the next step for us is to get above a .500 season and make it into the playoffs. That’s our goal.”

It’s a goal that finally feels reachable for these Dolphins. With that mantra of improvement, a competitive schedule, new offensive and defensive coordinators and strong leaders on each side of the ball, Dana Hills is fueled by a belief it can achieve its goal and prove those outside the program wrong.

“This is the time we can go to playoffs,” senior Matthew Lua Mu Poching said. “We can go where we want. It’s all on us. We just have to focus on each game one by one. Everything else will come.”

While the wins had increased incrementally, Skinner saw there was still room for improvement, and new faces were added to the coaching staff.

Curtis Madden was brought in as offensive coordinator. Madden has ditched the wing-T offense the Dolphins tried last year and brought in the spread offense as well as experience with winning programs at JSerra and Mission Viejo. Madden knows what it takes to win from his playing days at Kansas State and seeing his son, Tre Madden, make it to the NFL.

“He has a real idea about how to do exactly what we’re doing here,” Skinner said. “He’s doing a hell of a job. (Madden has) taken a lot of his experiences and melded them together.”

Brad Carter comes in as defensive coordinator with junior college coaching experience. He’s a young coach, but the biggest thing he brings to the Dolphins is the passion and energy that a team like this needs.

“You have to contain him a little bit,” Skinner said, “but that’s what you want out of a defensive coordinator. His acumen is off the charts.”

“Just the change of coaching, the change in attitude around this program,” senior center Shane Darr said. “It’s definitely changed. Before it was kind of lackluster. Now, it’s going to be big.”

Opening Up the Offense

Madden has come in with the spread offense, and he has a quarterback to take it on in Saavedra.

The Dolphins had mixed results with the wing-T offense last season, but Saavedra has come on strong to the new looks.

“I think it’s a better suit for me,” Saavedra said. “Last year we worked the wing-T, but I couldn’t really work out of it. It wasn’t enough for me to get enough time back there. I think the spread is going to work well this year.”

The wing-T is more run-focused, but with the arm, ability and IQ of Saavedra, the Dolphins will be able to distribute the football and utilize the speed of receivers like Max Burlison and Trevor Gartlan.

“We’re going to throw the football,” Skinner said. “There’s no doubt about that. But I think our biggest thing is that we have options. There’s always two or three different choices for whatever defense lines up against us.”

Carter’s energy filters down to his defense, a fast-playing group.

“We’re pretty solid,” Lua Mu Poching said. “We’ve got athletes out here, but we’re not big in size. We’re athletic. We have to do our thing.”

Dana Hills isn’t breaking the wheel with its set up, a 4-3 cover two look, but it allows its sturdy line with players like Adrian Sword and its secondary with Burlison to play to their strengths.

The toughest among them may be the middle linebacker, Lua Mu Poching, who will command the defensive side of the ball and go both ways as a running back.

Skinner described this year’s group of Dolphins as resilient, first and foremost.

The Dolphins were going through their changes while also practicing at an elementary school all summer as new turf was being put in at Dana Hills. Skinner has said they’ve all taken it in stride.

“Their resiliency is strong,” Skinner said. “I think that’s a great thing in football. Things happen on the field, it’s a chaotic game. When you can handle the ups, downs and everything in between and still get better and play better and play together, then they’re going to be pretty good.”

With the changes in coaching and attitude, the team seems primed to take on what Skinner called a more manageable schedule than in previous seasons.

“It was just kind of a gauntlet,” Skinner said. “We didn’t have the amount of kids to match up. It was tough. Our schedule, their kids are like our kids, their numbers are like our numbers. I feel like we’re in a much more competitive situation.”

All of this adds up to truly tangible change for Dana Hills.

For a program that moved things around and still struggled like the Dolphins have, it can sound like a lot of window dressing, but to a man, the Dolphins believe and are ready to change people’s minds and take on the representative mantle for Dana Hills.

“We’re trying to change how Dana sees us,” Burlison said. “We’re trying to be the face. It’s more effort and taking pride in that we’re on the football team and try hard every day.”