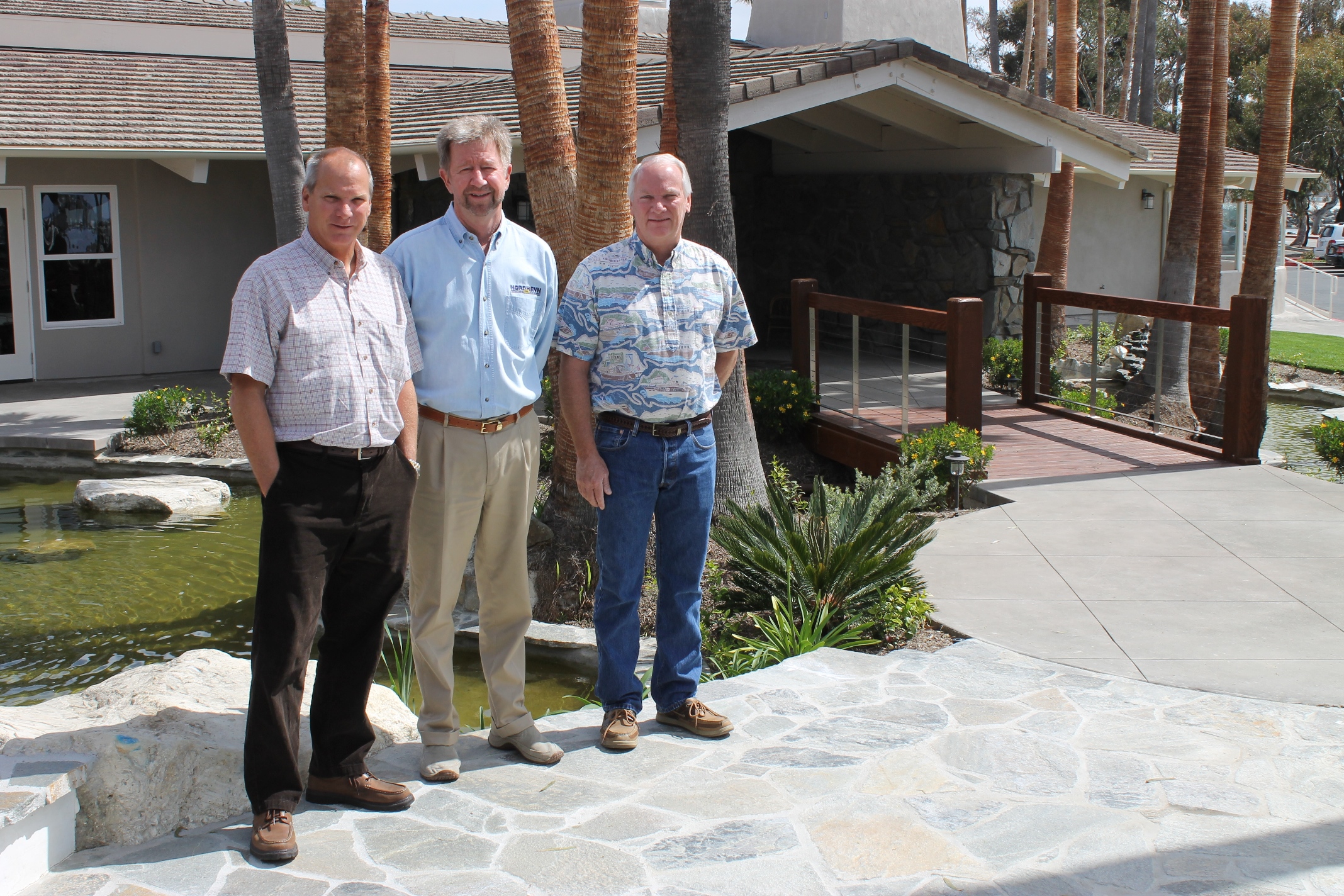 For nearly 40 years, Dan Streech has conducted business out of the same location in the Dana Point Harbor. Opened in 1974, about three years after the harbor, Pacific Asian Enterprises, Inc., a brokerage company and manufacturer of the luxury-yacht line Nordhavn, has grown globally, but most recently has stretched out within its homeport.

As of December the company, owned and operated by three Orange County natives, Streech and brothers Jim and Jeff Leishman, moved into a freshly renovated facility at the Dana Point Harbor. After more than a decade of traveling between five offices in the harbor and off of Pacific Coast Highway, a mile away, the some 50 employees at PAE headquarters are now housed beneath one roof.

“During our crazy years of growth, we kept expanding out and now bringing everyone under one roof will help us be more organized,” said PAE president Dan Streech.

Constructed in 1971, the near 9,000 square foot, freestanding building, on the island side of the harbor has seen its fair share of turnover.

Established in its early years as a nautical-themed bar, called The Castaway, the location has, for decades, suffered from an apparent identity crisis. Changing hands a few years after the harbor opened, the site transformed from a Polynesian paradise with an interior mimicking a shipwrecked hull—complete with upholstered barrels for seats—to El Adobe by the Sea, a Mexican canteen, then later to Delaney’s, a seafood house, and most recently The Beach House restaurant.

The former-site of a Southern California restaurant chain, The Beach House’s facade served as an empty, but stark reminder of the 2008 recession’s local impact.

Hit hard by fiscal blows and unable to maintain operating costs the eatery and the Orange County Board of Supervisors ended their leasing agreement two years early. After more than a decade in operation, and following suit with the spot’s earlier ill-fated restaurants, The Beach House closed its doors on New Year’s Day in 2010.

Later that year Orange County, which owns and operates the harbor, issued a Request for Proposal (RFP), an open call for bids, for projected uses of the available space. After months of advertising the county received a single response from Pacific Asian Enterprises, the manufacturer of Nordhavn yachts.

“When the place became available there weren’t too many restaurants interested in coming down here and being the fifth casualty of this location.” said PAE owner and vice president Jim Leishman.

In March 2011, the county’s Board of Supervisors authorized three 10-year lease agreements with PAE. With approval received from the city of Dana Point’s Planning Commission and City Council, and the green light to move forward from the California Coastal Commission, construction eventually began last summer.

With years of restaurant wear to be undone, the company invested more than $1 million to re-haul the corroded structure in a state of disrepair.

“The place was a disaster,” Leishman said. “We came in and it was unbelievable, it would have been possibly cheaper, with the permitting process aside, to bulldoze the whole place down.”

Underground sewage and water utilities were ravaged and the interior of the structure had to be completely gutted and replaced. No longer do booths line the harbor facing windows, instead they were removed to make room for open office space housing the Nordhavn sales, design, marketing and engineering teams.

“The contractor said if the termites stopped holding hands it would have fallen down.” Streech said.

One trademark and a reminder of the businesses of old remains, a portion of the longstanding bar is intact, and with an exterior makeover giving the location a renewed, clean look, PAE plans on utilizing the outdoor patio space for hosting staff and client functions.

Jim Leishman and Dan Streech became friends while working at a yacht brokerage company in Dana Point. When the company closed in 1974, the 20-something year olds—from San Clemente and Orange, respectively—formed a small yacht brokerage and importing business with then-business partner Joe Meglen, the beginnings of which evolved into Pacific Asian Enterprises.

From their original office on the island side of the Dana Point Harbor, the local yacht brokerage has developed into a global design, sales, broker and manufacturer of Nordhavn Yachts.

“We have delivered or done as much as $80 million of sales in the better years—it’s down now because of the recession, but most of it is sold or delivered to different parts of the world, but administered from here,” said Streech.

From the one office at the harbor, the company has grown to include national offices in Seattle, Portsmouth, R.I., Stuart, Fla., and international sales and service branches in Southampton, United Kingdom and Scarborough, Australia.

Also, the company has exclusive building-partnerships with two factories, Ta Shing Yacht Building Co. in Taiwan and South Coast Marine in China, where all Nordhavn vessels are constructed.

With business coming back after the economic downturn, PAE is not only growing spatially but is also expanding designs, as the fleet of Nordhavn vessels nears its 500 mark—including the completion of the flagship 120-foot vessel, expected to be delivered to Canadian customers in July.

Their ocean-crossing Nordhavn armada may have tracked more that 3 million nautical miles, but the hub of the engineering, sales, marketing and management of yacht-builds remain operating out of the local site.

“Both Dan’s daughter and son-in-law, sister and numerous family members on his side and both of my sons and my nephew work here,” said Leishman. “So we’ve got a lease that will take those younger people to retirement age.”

Streech added, “We’re thinking about adding a little graveyard out back.”

All jokes aside, the family-owned and operated global yacht enterprise is excited about its new home.

“The last five years have been pretty tough to stay in business, but we feel like it is behind us now,” Leishman said.

As part of its lease with the county, PAE is responsible for maintaining their location’s adjacent parking lot. Metal spikes have been removed and public parking is now available. For more information on Nordhavn, visit www.nordhavn.com.