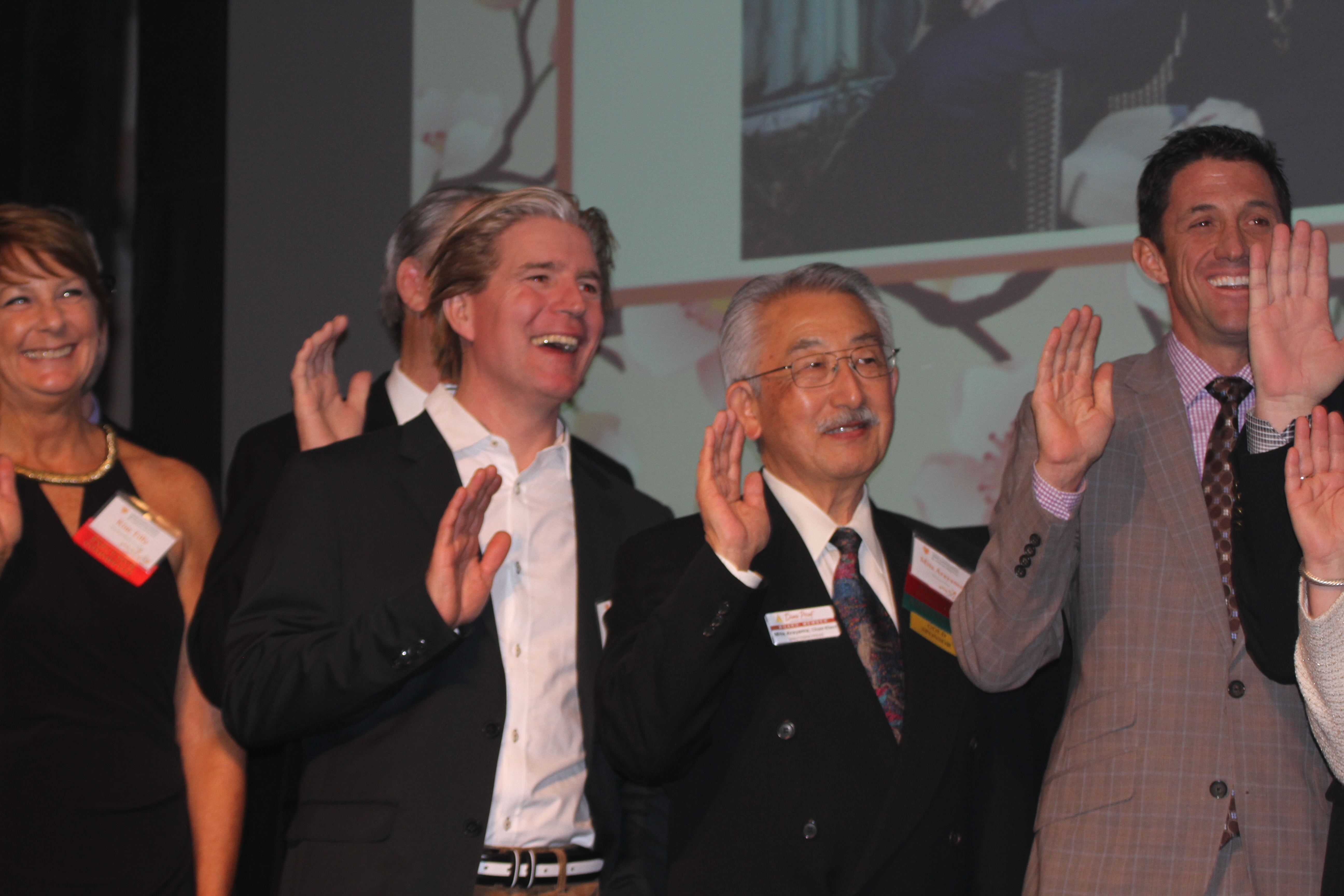 The Dana Point Chamber of Commerce inducted new board members, chose a new chairperson, and honored the business, ambassador and citizen of the year at its 2016 Annual Meeting and Installation Dinner, on Jan. 28 at the St. Regis Monarch Beach Resort.

The event—attended by chamber members and guests, as well as a number of city and state elected officials—was, as usual, a joyous celebration of the collaboration between the chamber, the city and Dana Point’s business community. This year’s event was emceed by chamber board member Viet Tran (Southern California Edison).

The crowd of more than 150 people dined and listened on as 2015 Chairman Enzo Scognamiglio (Brio Tuscany Grille owner) opened the annual meeting and Dana Point Mayor John Tomlinson performed the swearing in of the new board for 2016.

Following the business portion of the meeting, Scognamiglio voiced his appreciation and enjoyment of his time as chairman. He also recalled some of the past year’s successes, such as partnering with the city in the Shop Del Prado campaign to help attract shoppers to Del Prado businesses during the Lantern District streetscape and infrastructure construction, and the chamber’s growing membership.

“We are the voice of business for Dana Point,” he said. “From the Lantern District to Doheny Village to the Harbor, we are here to help our businesses. We are committed to being financially secure and operating the chamber to the highest standards. We are a strong chamber and you have helped to achieve that. And for that I thank you.”

Scognamiglio wrapped up by introducing Mits Arayama (Minuteman Press owner) as the incoming chairman for 2016.

“I have no doubt Mits will be a spirited and effective leader for the chamber,” Scognamiglio said as he handed the gavel off to Arayama.

Arayama took the podium and invited Senator Patricia Bates to join him on stage to thank Scognamiglio for his service as chairman for the past year.

“Thanks for your strong leadership in 2015 and for the passion you have for the chamber and our members,” Arayama said. “Your enthusiasm and hard work was contagious and we are better for it.”

Bates added her praise of Scognamiglio’s leadership and thanked him for his participation both in the chamber and at a small business roundtable she held last year and presented him with a framed proclamation in honor of his service.

Arayama addressed the crowd with his hopes and plans for the chamber in 2016.

“2016 will be the extension of a three-year plan our board set two years ago,” Arayama said. “Our chamber has done a great job in serving and representing our members and I will see that we continue on the same path. We will continue to focus on four areas: membership … fiscal vitality … advocacy … and community.”

Walsh has been a longtime, dedicated member of the Dana Point Civic Association and the Historical Society and served on the Town Center Plan Committee, among many other volunteer posts on a number of local nonprofits.

Walsh said that over the last 20 years of life in Dana Point, his “like” for the city has turned into a “love,” second only to his love for his family.

“If you can love a city, I love this city; I really, really do,” Walsh said, adding that he is extremely honored to have been chosen by a vote of the past citizens of the year, his peers, for the award.

The Business of the Year went to Jack’s Restaurant owner Jack Loconsolo who during the 18 years he has operated his restaurant in Dana Point has been very involved in the community. Along with his participation in the chamber, Loconsolo has lent his support to a number of local nonprofits, including the Dana Point 5th Marine Regiment Support Group and the Ocean Institute. He, along with Jenkins, was instrumental in organizing the first Del Prado Art Walk in 2015.

The Ambassador of the Year award went to Judy Brandmeier, the former owner of Beacon Printing, a chamber member of more than 30 years and a dedicated community volunteer. She has served on the chamber board of directors and been a longtime member of the ambassador board.

For more information about the Dana Point Chamber of Commerce, visit www.danapointchamber.com.

Chamber of Commerce 2016 Board of Directors