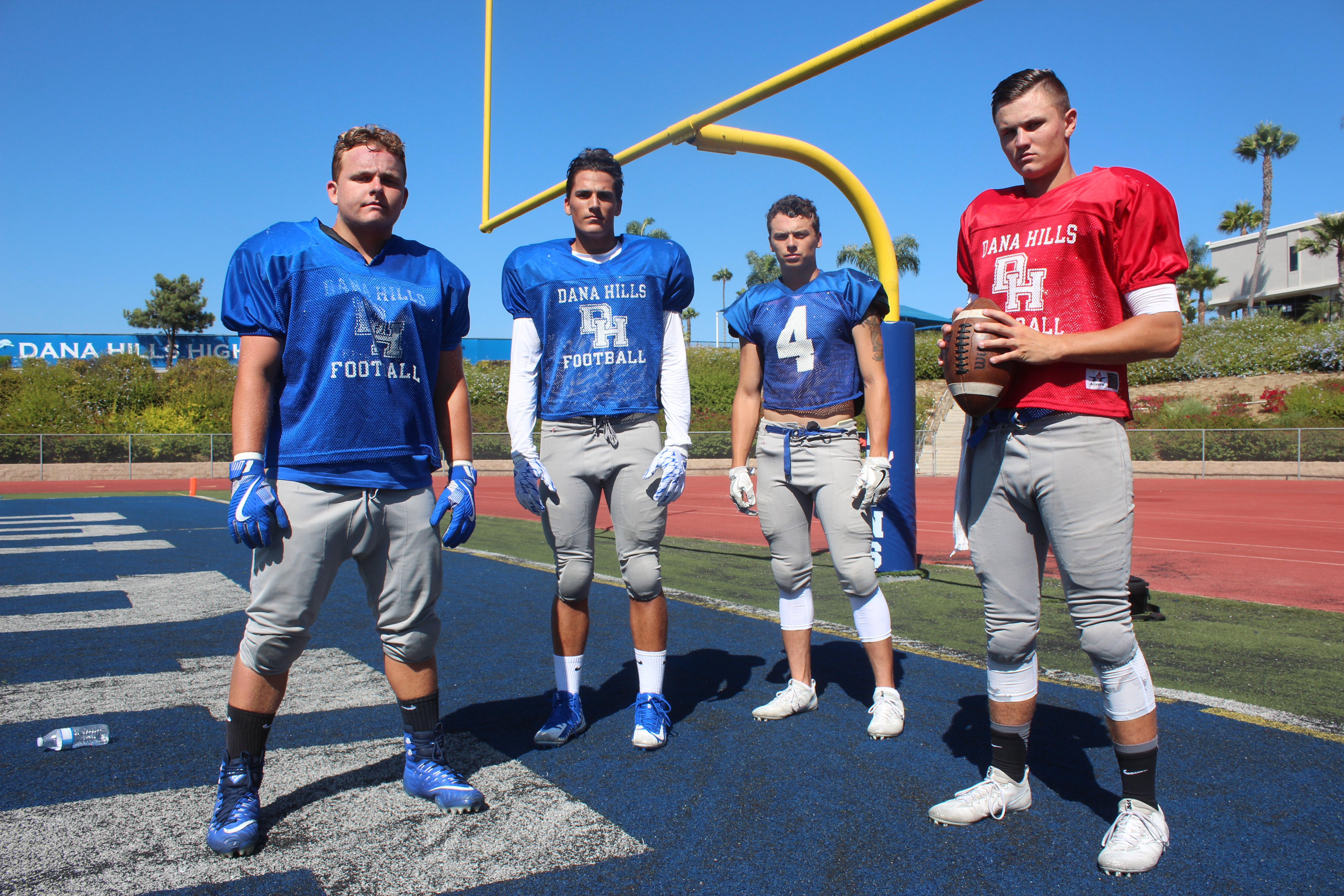 In our annual Dana Hills High School football preview, we delve into everything you need to know about the upcoming Dolphins season. Scroll through the PDF version above for more photos and interviews.

Phil Skinner has been around the Dana Hills High School football program for 11 years. In that time, he’s served as coach of the offensive line, strength and conditioning coordinator and assistant head coach.

He’s been a constant presence in a program that has undergone three coaching changes since 2006. He’s been there for the good times and the rough patches.

Now entering his third year at the helm as head coach, Skinner looked back at the program’s history for inspiration heading into the 2017 season.

He remembered back to the successful Dolphins teams of old and recognized a common theme on offense—they all relied heavily on the run.

He knew his 2017 roster would be full of versatile skill players with the ability to run and make plays. His offensive line would not be the biggest, but they possessed speed, agility and toughness.

Skinner decided it was time for a change. The Dolphins, who have won just one game in the past two years, went through an overhaul on both sides of the ball this offseason.

Ready to meet the challenge of learning a new playbook was a large group of returning players that have three years or more of starting experience.

There is nothing a high school football coach values more than time. Whether it’s preparing for a game, running through practice or dealing with the hectic day-to-day schedule that comes with the job, every hour is thought of as a precious resource.

Skinner applies that same mentality to the football field. Time, or, more accurately, time of possession, is king.

The Dolphins want to control the clock, and tempo, in 2017. They plan on doing that by implementing a run-heavy offense. Bob Sykes, a veteran coach of the Central Coast who also coached at University of Nevada, Reno and is a proponent of the Wing-T offense, was brought on as offensive coordinator.

The Wing-T involves multiple backs in the backfield, which plays to the Dolphins’ strength.

Leading the way will be senior quarterback and three-year starter Corey Cisowski. Surrounding him is a stable of playmakers, including senior Gavin Papagallo, Brandon Oswald, Jack Oliver and Jake Baldiviez. All of the Dolphins backs, including fullback Matthew Lua Mu Poching, will be utilized early and often in games.

That’s not to say the Dolphins aren’t planning on throwing the ball. In Cisowski, they have a rising signal caller that has improved every season of his high school career. Last year he threw for 2,099 yards, 20 touchdowns and 16 interceptions.

“The offense is really shaping up well. We’re implementing the new running attack, which is a really balanced attack that will open up the passing game for me as well,” Cisowski said.

But the skill players are only half the equation.

The Dolphins’ offensive line will be key to the new philosophy’s success. Skinner stressed the need for his blockers to be mobile, as well as physical.

“We’re excited about the fact we are going to win the war of attrition up front and control the clock,” Skinner said.

Senior three-year starter and center Tommy Bortnick was more than up for the challenge of leading the line through the transition period.

“The new offense is really fun because it’s a ton of misdirection stuff,” Bortnick said. “The defense never really knows what’s coming so it’s fun to get some big hits and blocks.”

Joining Bortnick on the offensive line will be four-year starter and tackle Hunter Steele and junior Adrian Sword.

The Dolphins allowed just over 43 points per game on defense last season, and will have a new look on that side of the ball in 2017.

Just like the offense, the defense underwent a change as John Donnelly was brought in as the team’s new defensive coordinator. Skinner said under Donnelly, the Dolphins defense will be much more aggressive and play with more speed than in years past.

Anchoring the middle of the defense will be the linebacker tandem of Julian Casillas, a three-year starter, and Lua Mu Poching.

Bortnick and Steele will pull double-duty on the defensive line, and Polish transfer Kuba Rekawek will be looking to make an impact after a standout performance in training camp.

“We’re playing a lot tougher style of football. It’s always fun and physical and we all really want to play hard,” Steele, who will play defensive end, said.

The offense and defense may look new, but the Dolphins’ depth chart will not. This team is full of players who started as sophomores, and are hungry for wins heading into their final season together.

“They learned under fire. They’ve been taking their lumps and paying their dues,” Skinner said of his senior class. “Their confidence level is pretty high right now.”

The upperclassmen have been waiting for the moment to show what they can do with experience on their side, and now it’s that time.

“Since sophomore year it’s all been working up to this point,” Cisowski said. “With two years of experience under our belt, there are not a lot of other teams like us. We’re really excited to leave our mark.”