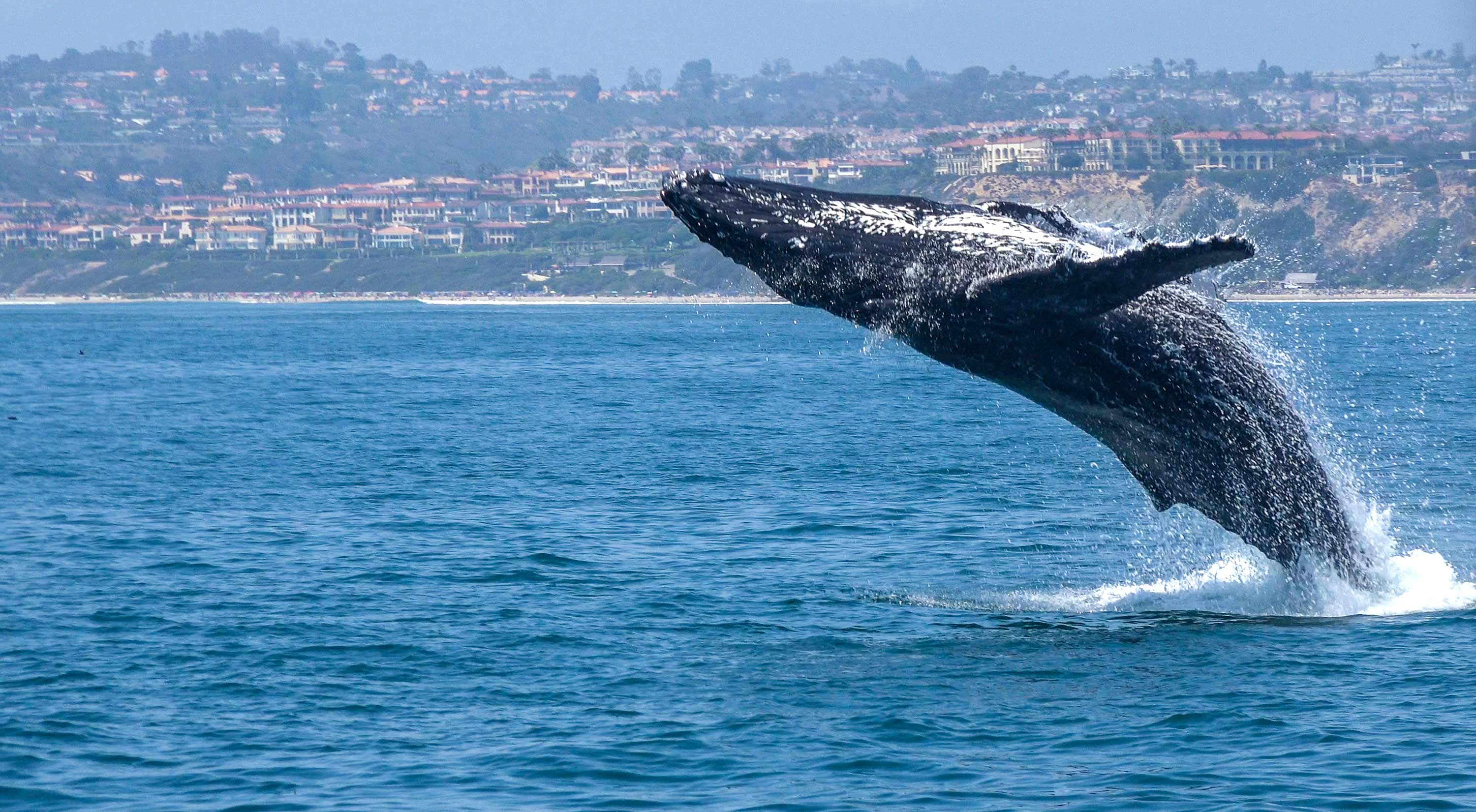 Dana Point is now, officially, the “Dolphin & Whale Watching Capital of the World,” thanks to two local women who took on the initiative a year ago.

Donna Kalez, of Dana Wharf Sportfishing & Whale Watching, and Gisele Anderson, of Capt. Dave’s Dolphin and Whale Safari, teamed up despite the rivalry between their whale- and dolphin- watching charters in Dana Point Harbor.

Kalez’s father, Don Hansen, is credited for being the first to offer whale watching in Orange County. Hansen began taking whale watchers out to sea off the San Clemente pier in the 1960s as a side venture to his fishing business. In 1971, he founded the first whale watching company in Dana Point, and Dana Wharf Sportfishing & Whale Watching became the first business in Dana Point Harbor. Kalez and her brother, Mike Hansen, took over the business in 1994.

Capt. Dave Anderson had been living aboard his sailboat in Dana Point in 1995, when he first had the idea to start taking passengers out to see whales and dolphins. Over the course of five years, he used his camera footage to create an award-winning documentary, Wild Dolphins & Whales of Southern California. His wife Gisele Anderson is the Vice President of the business.

The 2014 Los Angeles Times column “Rivals spar over the spouts off Dana Point” illustrated the lengths each of the businesses would go, to offer their passengers the better whale watching experience, and dramatized the relationship between the local leaders in whale watching.

“Before these so-called ‘whale wars,’ we were friends,” Gisele Anderson said. “I told my husband, ‘I’m calling Donna!’ And we sat down, we talked, and we decided to move forward.”

Gisele Anderson said she realized Dana Point had a marketing opportunity when she went to Australia with her husband. The promotional advertising for whale watching blew Dana Point out of the water, she said.

“Australia really touts their whale watching. They really invest in their marketing on a national level,” Gisele Anderson said. “Whenever there’s a new boat added to a whale watching company, the prime minister comes out. It’s a huge deal. I thought, ‘Why can’t Dana Point do something like this?’ ”

Gisele Anderson says she came to find out the whale watching she experienced abroad was underwhelming in comparison to what was offered in Dana Point.

“In talking to the captain, I learned that whale sightings really only occur three or four months out of the year due to inclement weather. There are only a couple hundred dolphins, and about a third of their trips end up getting canceled,” Gisele Anderson said.

Dana Point waters see about 40-50 whales daily passing through during peak migration season. The migration of the gray whale begins in December and continues through March, as they travel from feeding grounds in the Bering Sea to warmer waters in Baja, where calves are born.

Experts believe gray whales travel so closely to the Dana Point shoreline, because the Dana Point Headlands serve as a landmark for their journeys. The abundance in sightings inspired the annual Festival of Whales, the longest-running celebration of the gray whale. The festival celebrated its 48th year in March, drawing thousands of visitors.

“With all Dana Point has to offer for dolphin and whale watching, it made sense to trademark it as not just a destination but as the capital of the world,” Gisele Anderson said.

Taking on the Trademark

After setting aside their rivalry, Kalez and Anderson developed the idea to trademark their concept. They pitched the undertaking to various entities, including City of Dana Point, Ocean Institute and Visit Dana Point.

“We soon realized that the best way to get things done was to do it ourselves,” Kalez said. “And two women were able to get it done.”

“Donna is very well-connected and is a strong leader in the community. We were able to use that strength in our networking efforts,” Anderson said. “My role was to take on the research.”

Kalez and Anderson worked with trademark attorney Michael Markos, who explained to them that they would need to create an entity for the application process. It just so happened that each of the women had her own piece of the puzzle. Kalez had owned Dana Point Whale Watching Corp, but it had been sitting dormant. Anderson had owned the domain danapointwhalewatching.com. Anderson and Kalez combined their resources, and their trademark application was approved and finalized by the U.S. Patent and Trademark office. The website is now up and running to promote Dana Point’s dolphin and whale watching excursions.

“This is our gift to the community. We put in the effort, time and resources to get this done, and we want the community to really take advantage of this trademark,” Kalez said. “We want the city, the county and state of California to be able to claim Dana Point as the Dolphin & Whale Watching Capital of the World.”

“All who live in Dana Point and its surrounding areas have always appreciated our sea-life, and it is a true honor to now be internationally recognized as the whale and dolphin watching capital of the world. I applaud Donna Kalez and Gisele Anderson on their tireless efforts to make this recognition a reality.”

Kalez and Anderson envision that the trademark be utilized by the State of California, as well as receive national recognition.

“Wouldn’t it be cool if the state used this trademark to say California is home to the Dolphin & Whale Watching Capital of the World? If we could get that kind of support in the way that Australia rallies for their industry, it could really open up opportunities for our community,” Kalez said.

As for what’s next, motorists will soon see signs on the freeway with the trademark logo after Anderson secured the required approvals. The pair will also take on the task of creating a national “Dolphin & Whale Watching” holiday.

“It’s been a great feeling,” Kalez said. “We were able to work together for this huge undertaking, put away a lot of our differences and trust each other. There’s no limit to what we can accomplish.”