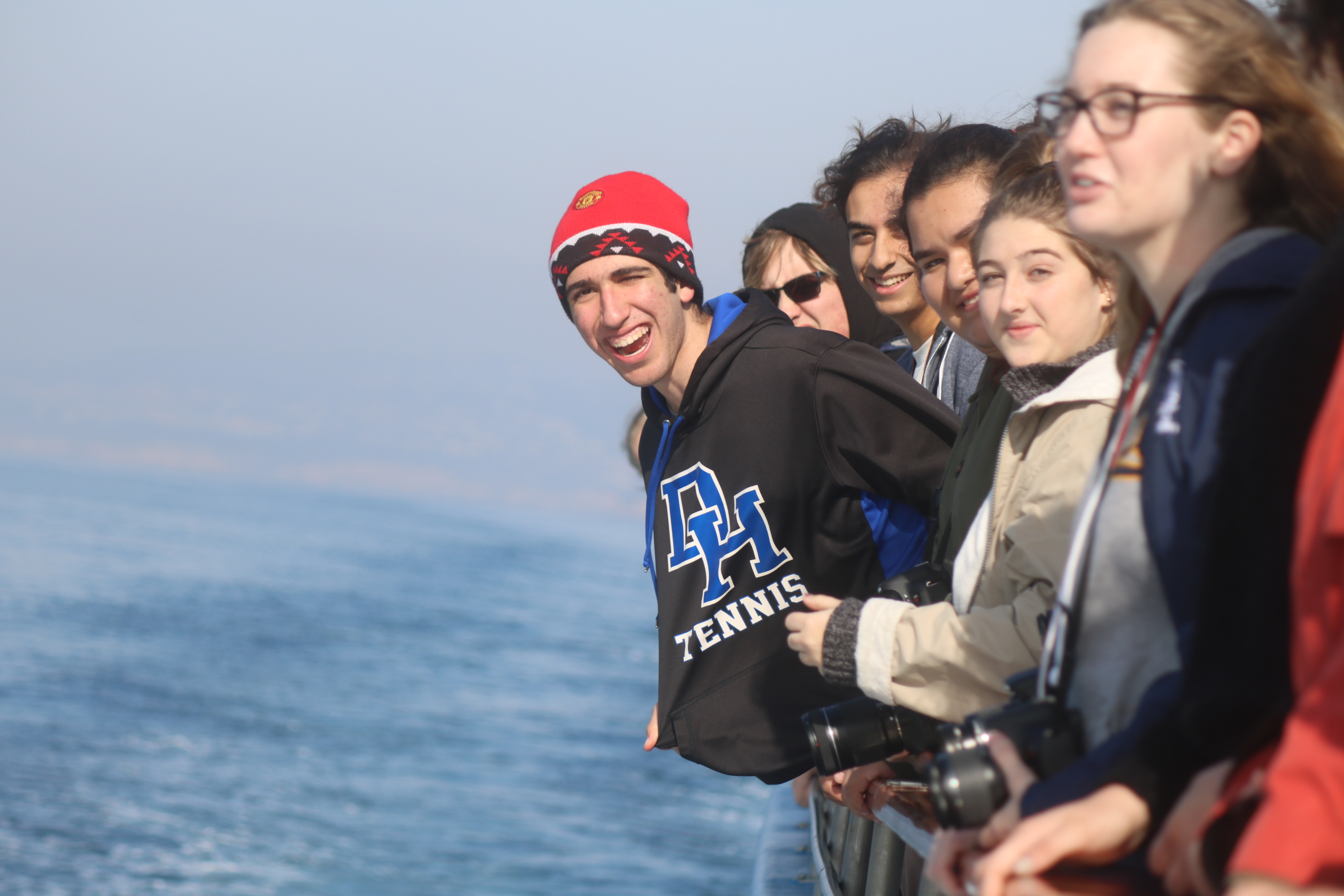 Anxious energy rippled through the air as 58 Dana Hills High School (DHHS) students prepared to board Dana Wharf Sportfishing and Whale Watching’s boat the Dana Pride. With a winter westerly swell having arrived overnight causing high-surf advisories across California coastlines, students were preparing to embark on a field trip deeply rooted in the core elements of adventure and inspiration.

Each year, students from DHHS fine art classes—including A.P. studio art, video production and drawing and painting classes—set sail out of the Dana Point Harbor in order to gain inspiration for creative projects to be displayed and sold during the annual Festival of Whales celebration.

DHHS fine art teachers Krista Rodriguez and Chau Tran, whose classes were attending this year’s Festival of Whales inspiration trip, voiced that this whale watching experience has more to offer their students through the challenges it presents, than its leisure.

“Being out on the ocean, being a part of the elements, it certainly has its challenges for artists,” Rodriguez said. Tran seconded this, saying that his students’ work was significantly enhanced after experiencing the realities of life on the water.

“The tones of the water, the texture of the skin of the animals, it all becomes so much more real. You can emulate as many things as you want, but there is nothing like the real thing,” Tran said.

For some students, the Festival of Whales inspiration trip is a routine day on the water, for others, never before explored territory, but for all aboard the Dana Pride earlier this week, growth is formed from stepping outside of the stable platform of the classroom, and stepping foot into the wind and the waves.

Sky Hernandez, a junior at DHHS, had never been on a boat before this trip. When asked how that could be, she responded simply, saying that she was afraid of the ocean.

“I’ll go to the beach sometimes, but I have never been on a boat. To be honest, I’m afraid of the ocean,” Hernandez said, mentioning that her older sister inspired her to attend.

Rodriguez voiced that this is not an uncommon experience for students in her DHHS classes.

“For a lot of us, the ocean and things like boats are second nature,” Rodriguez said. “But we have to remember that for some, just because it is close doesn’t mean it’s their reality. Boats are expensive and time consuming; it’s amazing to be able to bring these kids into a new world right in their own backyard.”

For some DHHS students, in retrospect, the most inspiring moments may have been what they learned about themselves as much as any natural elements.

“It’s beautiful, I had no idea. I’m a little shaky, but I like it,” Hernandez said calmly, sitting on the back deck of the Dana Pride. Succumbing to sea-sickness earlier in the trip, she now sat firmly planted on the deck of Dana Pride, eyes peeled for her prized gem—a grey whale.

On the opposite end of the spectrum, Melanie Shams, a senior at DHHS, combs the deck of the Dana Pride like a sailor who has earned her sea legs.

That’s because she has.

The 17-year-old video production student is attending the trip to work on her video editing and interviewing skills. Shams, who aspires to be a lawyer, seems to float along the boat as others wearily cling to the rails for support.

An enthusiastic and regular fisherman, favoring pelagic fish, Shams said that she will always have a passion for fishing but that she wants to keep it on the side.

Her comfort is evident; managing her movement on the Dana Pride as opposed to surviving the rise and fall of each step, Shams is taking advantage of the opportunity to intertwine her passion and her education.

Identifying students for interviews, Shams angles for proper lighting and manages her co-part operating the camera in order for better sound quality. Occasionally cracking a smile, Shams maintains an obvious sense of control amongst her classmates, keeping her own personal progression to herself.

Like Shams, Aaron Munger, a junior, has experience on boats. In fact, he was a deck hand aboard the Dana Pride.

He expressed that it’s inspiring to him to work with his classmates in order to positively shape their experience through his knowledge.

“In a way, teaching is natural out here. I love being on the ocean and I do a lot of other things now, but it’s cool to be able to pass along everything that I’ve learned.”

With decades of teaching experiences between them, Rodriguez and Tran agreed that the open-air classroom encourages their students to grow in ways that the classroom cannot provide.

Mia Jessen, a senior in the art studio class seconded this, saying that she was, “the type to indulge in life experiences instead of sitting and being talked to.”

Once the Dana Pride returned to the Harbor, the students seemed to have settled in. Quietly and contently taking in their surroundings, a majority appear more contemplative; sitting along the railings with their feet hanging over the passing waves below.

“It’s astonishing,” Rodriguez said. “What you learn when you aren’t in complete control of all of the elements.”

The 47th annual Dana Point Festival of Whales will take place in the Dana Point Harbor on March 3,4,10 and 11. Visit www.festivalofwhales.com for more information.