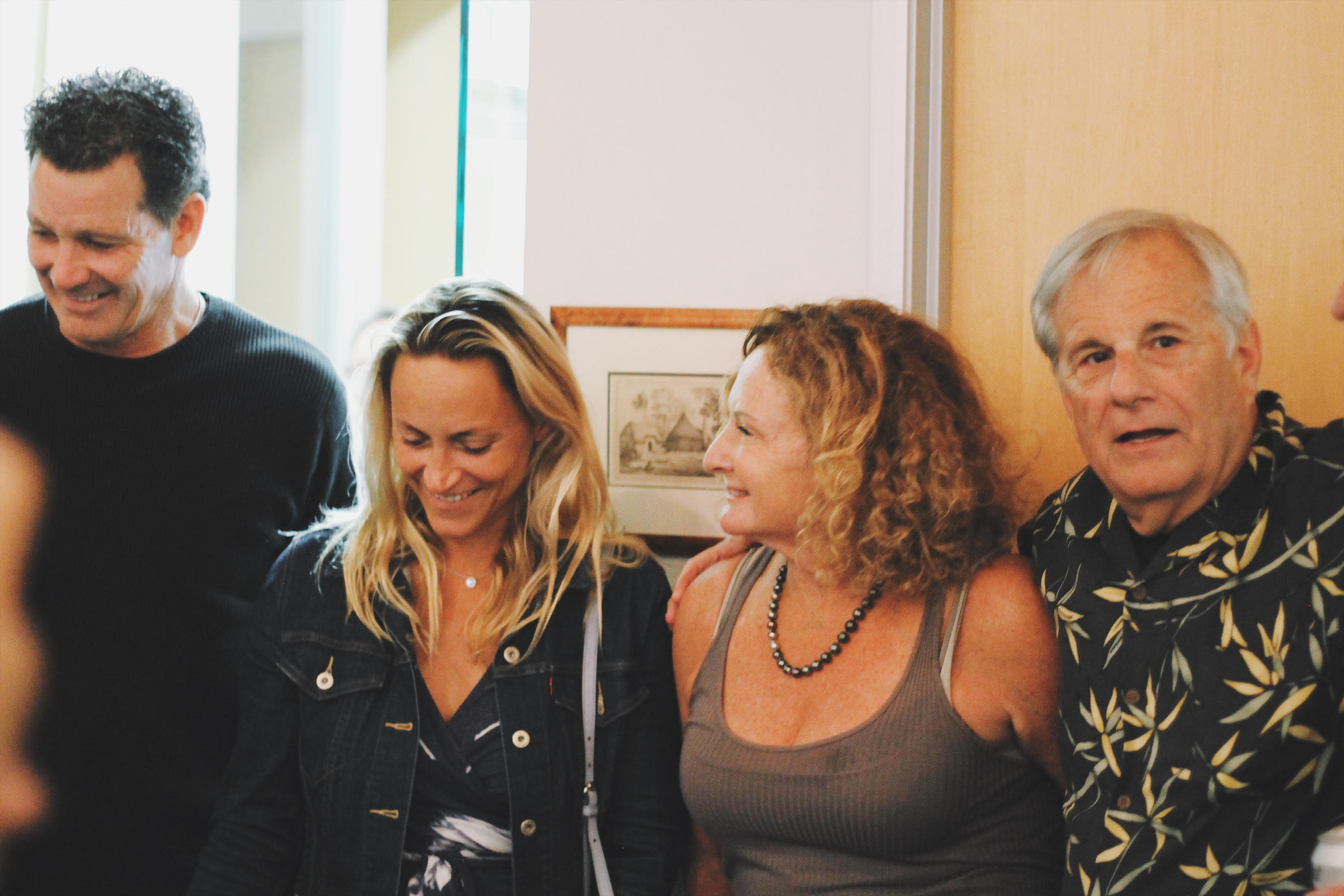 New exhibit, Ohana Gala at the Surfing Heritage and Culture Center honors contributions of four women who made the sport of surfing

In 1905, a surfboard belonging to Hawaiian Princess Kananmuna was found in a burial cave in Ho’okena on the Big Island. Believed to be carved in the 1600s, to date, it’s the oldest papa he’e nalu (surfboard) ever found. The artifact confirms that women were sliding waves alongside their male counterparts back when William Shakespeare was scribbling sonnets and Galileo was setting his sights on the stars.

Women have forever been intertwined in the cultural fabric and evolution of the sport of surfing—they just haven’t always been as celebrated as the men they rode alongside. To set the record straight, the Surfing Heritage and Culture Center (SHACC) has just launched its new exhibit, “Women Making Waves.” Celebrating four very pivotal female surfers—Joyce Hoffman, Rell Sunn, Lisa Andersen and Stephanie Gilmore—the exhibit is a deep dive into the life and times of a quartet of women who advanced the sport of surfing in their own unique ways.

Throughout the 1960s, Hoffman, who grew up on Beach Road in Capistrano Beach, dominated women’s surfing. Winning three U.S. surfing championships in a row and a fourth title in 1971, it wasn’t just the competitive accolades that cemented her legacy. Hoffman tackled notorious big-wave breaks such as Banzai Pipeline and Sunset Beach on Oahu’s North Shore.

Hoffman also famously enjoyed a sponsorship deal with sports-car company Triumph. They went so far as to make sure that whatever country Hoffman was in there was a Spitfire convertible with her Hobie Surfboard sticking out the back. They had them shipped all over the globe for her. No other surfer, male or female, past or present, has enjoyed that kind of perk.

Meanwhile, Sunn was known as the Queen of Mākaha, and over the course of her lifetime, became one of the most influential and instrumental Hawaiian surfers of the modern era. In addition to carving out a name for herself via competitive successes in the late 1960s and 1970s, in 1976, Sunn hosted her first menehune contest, collecting prizes and trophies for island youth with few opportunities. She took it upon herself to help guide and mentor up-and-coming youth from the hard-scrabble west side, including future world champion Sunny Garcia and Pipeline specialist Johnny-Boy Gomes. In 1983, she was diagnosed with breast cancer and lost her fight against the disease in 1998.

In the 1990s, Andersen smashed the gender barrier on the ASP World Tour (now the WSL Championship Tour). Born in New York and raised in Florida, after enduring a challenging childhood she ran away from home when she was 16 years old, landing in Huntington Beach with nothing more than some personal items and a surfboard. Her early days on the West Coast were challenging, but she persevered and in 1987 won the National Scholastic Surfing Association national title. She was named ASP Rookie of the Year the same year.

Starting in 1994, Andersen claimed four consecutive world titles. She also became the cornerstone of women’s surf-wear brand, Roxy. She was named as one of the 100 Greatest Sportswomen of the Century by Sports Illustrated for Women and was also named the 1998 Female Athlete of the Year by Conde Nast Sports for Women magazine. Andersen stepped away from full-time competition in 2001 due to nagging back issues and to raise her family. Today, she lives in San Clemente and continues to be involved with Roxy, and she just got a new puppy.

Claiming her first world title as a rookie on the WSL Championship Tour in 2007, for over a decade Gilmore has been a driving force in the evolution of women’s surfing. To date, she has amassed 29 world tour victories (two of them coming in 2018) and six world titles. She was inducted into the Surfers’ Hall of Fame in 2010 and received the Laureus World Action Sportsperson of the Year award the same year. She’s also won ESPN’s ESPY award in 2011 and 2013 for Best Female Action Sports Athlete. Gilmore is currently ranked number one on the WSL Championship Tour. She has her sights set on a record-tying seventh world title in 2018.

Without question, this list could go on thanks to the contributions that so many women have made to surfing over the past century, and SHACC has future plans to honor more of them. For now, Hoffman, Sunn, Andersen and Gilmore are leading the charge.

Later this month, SHACC will host its annual Ohana Gala honoring Women Making Waves. The gala is a fundraiser to help preserve and share the history and culture of surfing; it will take place at The Ranch at Laguna Beach, located at 31106 Coast Hwy., Laguna Beach, on Friday, June 22. Hoffman, Andersen and Gilmore will all be attending, as will Sunn’s daughter. For more details visit www.shacc.org.