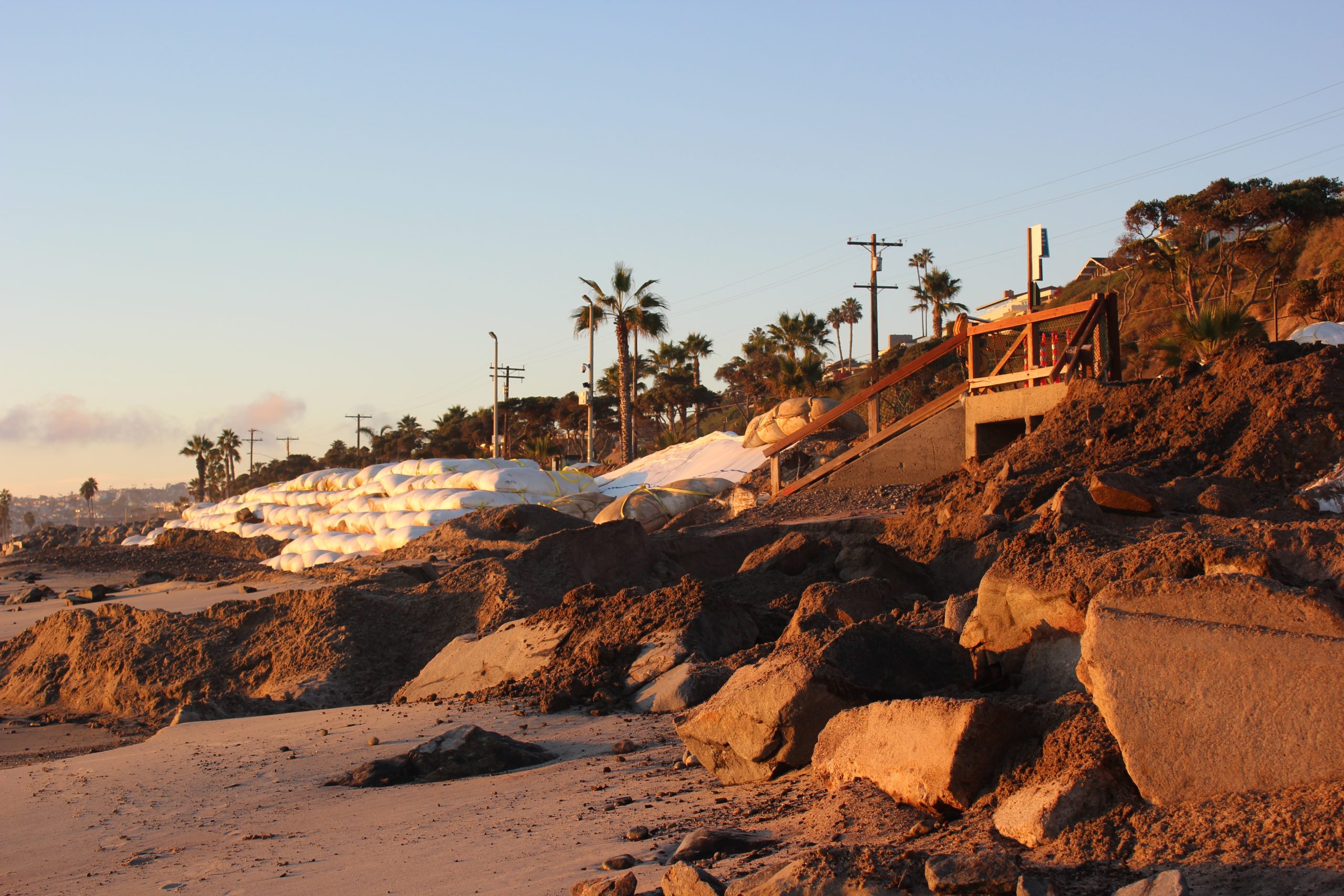 The California Coastal Commission approved on Nov. 19 an extension of the coastal development permit that’s allowed OC Parks to protect the Capistrano Beach shoreline with temporary boulders and sandbags.

The permit extension gives OC Parks until early April to obtain a new coastal development permit (CDP) for its proposed nature-based adaptation pilot project—a plan that looks to add cobblestone and sand dunes to shore up the coastline.

The Capo Beach park is under construction and closed to the public while county crews conduct maintenance by removing debris from old structures and laying down new sandbags.

“The protection of the parking lot is underway,” Vaughn said. “Once that’s protected, then the fill material that’s under the parking lot will no longer come out into the ocean, and those pieces are being cleaned up by construction crews on a regular basis.”

A portion of the boardwalk and steps collapsed because of high surf on Nov. 29, 2018, with further damage seen the next day. OC Public Works soon installed more than 1,000 tons of large rocks in place of the boardwalk.

As officials try and figure out how to proceed, more rock boulders and sandbags have been placed over the years to delay the destruction of the beach, walkway and parking lot—a method called hard armoring. But the hard armoring is a controversial strategy some environmentalists say causes more harm than good by interfering with natural sand flow.

In December 2020, the Coastal Commission allowed for the temporary rock wall that was already put in place to stay for a year. The permit extension granted at the Nov. 19 meeting will allow the rock boulders and sandbags to stay in place until April. 9, 2022, giving staff more time to coordinate the pending application for a nature-based adaptation pilot project.

OC Parks hope to use cobble berms to provide shoreline protection. Cobble is found naturally at Capistrano Beach and Doheny State Beach. A feasible study on the project explained that sand usually retreats from the shoreline during the wintertime and under storm conditions, while cobble accumulates at the shoreline. Cobble tends to dissipate wave energy and backwash energy, which occurs after the wave breaks and the water runs back down the shore.

The pilot project’s goal is to see if a nature-based solution would provide the protection needed for Capistrano Beach. However, the sandbags and boulders are only a temporary solution, and the Coastal Commission ultimately seeks their removal.

“It may be that at the end of the pilot project, there is no good alternative, and they’re just required to remove things,” Vaughn said. “We just don’t want to make that decision now without having tried some sort of adaptation approach first.”

Surfrider Foundation supports a plan that would require the complete removal of the parking lot and all the substandard fill as soon as possible, Erkeneff said in public comments. Only a South reach plan looks to remove the parking lot currently.

“It’s critical that we get this right, because even though this is just a small sliver coastline, this is kind of what we’re going to base a lot of the near future—next five, 10 years and beyond—on our eroding coastline,” Erkeneff said.

OC Parks expects implementation of the nature-based pilot project to take one to two years, depending on funding and permitting, Vaughn said. Pending the results of the pilot project, OC Parks hope to begin preparing a long-term plan.

Asking Vaughn to clarify the timeline for the pilot project, Commissioner Caryl Hart added that she was concerned about how long it might take between now and when OC Parks begins implementing a long-term adaptation.

“The thing that concerned me is the idea that they’re going to be waiting, and then planning, and then doing,” Hart said. “And it’s just going to be taking a really long time, and there’s currently a lot of money that was just passed in the state budget for climate resilience. Now is the time to not just plan, but do.”