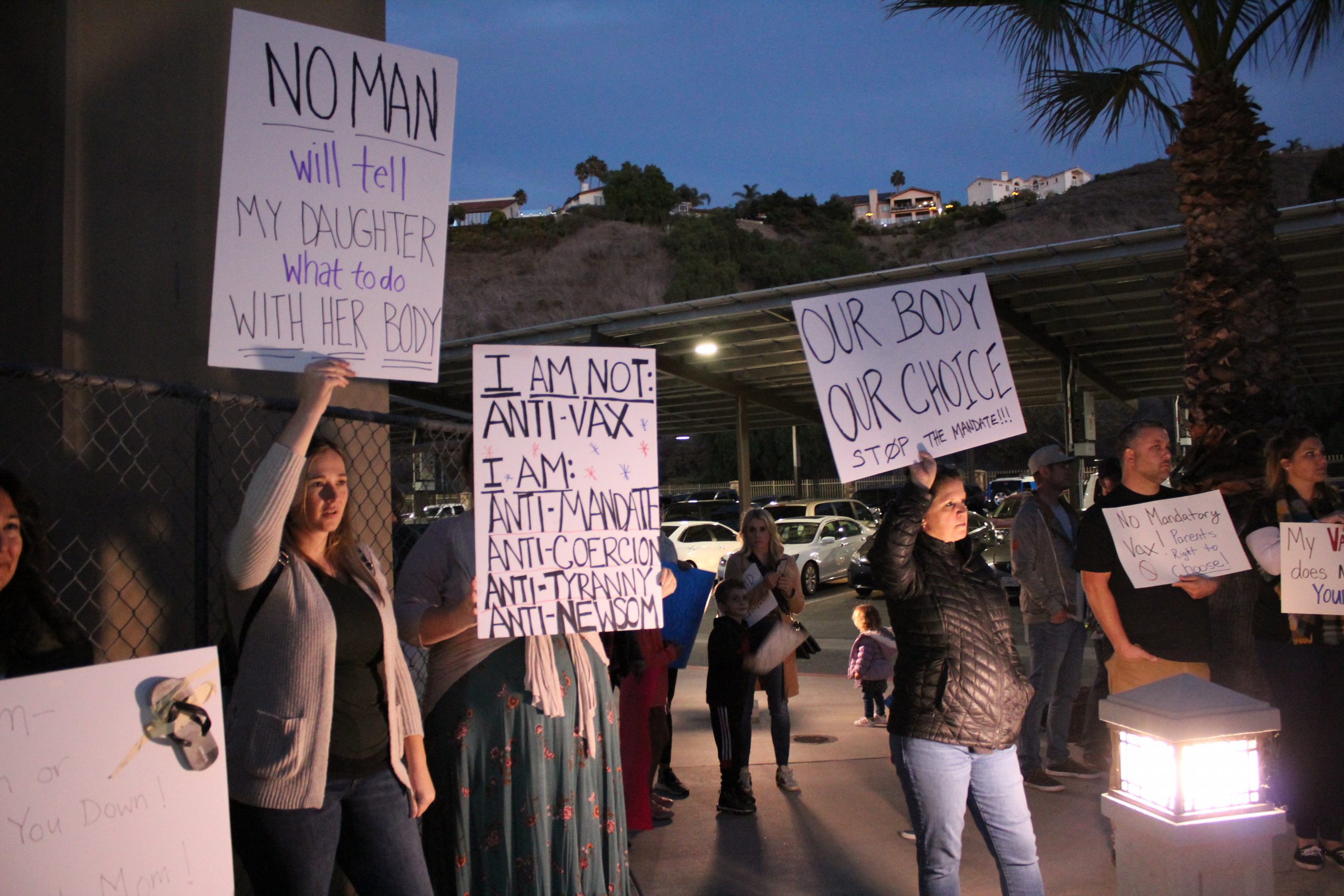 By Collin Breaux | Twitter: @collin_breaux In a largely symbolic gesture underscoring opposition from some in South Orange County toward state educational health policy, the Capistrano Unified School District Board of Trustees approved a resolution urging Gov. Gavin Newsom to reconsider and potentially do away with an eventual COVID-19 vaccine requirement for student in-person instruction. The board voted, 4-2, on the request co-authored by Trustees Gila Jones and Martha McNicholas during a meeting on Wednesday, Oct. 20. Jones, McNicholas, Trustee Lisa Davis, and Board President Judy Bullockus voted yes. Trustees Amy Hanacek and Krista Castellanos voted no. Trustee Pamela Braunstein was not at the meeting. The request came about due to concerns about how the mandate could affect educational experiences for students—particularly, due to parents potentially pulling their kids from school rather than allowing them to get the jab to stay on campus. Jones attempted to tailor language in the resolution toward state officials, saying a switch away from in-person instruction could impact social and emotional benefits for students. “We feel that whether you’re in favor of vaccines or not, the fact that children would be harmed by being removed from the district is something that needs to be brought to the state’s attention,” Jones said. Board members debated the exact words and technical details of the resolution during the hours-long discussion, including whether to add data about COVID-19 case and death rates—particularly as they apply to children. District trustees and staff have repeatedly said they must adhere to state guidelines, a point reiterated by Bullockus. “We have said to you in many emails and on many platforms (that) we are following the (California Department of Public Health) and we are following the governor—not that we necessarily like it,” Bullockus said. “But, please understand these people are working around the clock. You all know what we did to get kids back into the classroom. These changes that are coming down legislatively from the governor are constantly changing.” Hanacek said that while she understood the intention of the resolution, it won’t effect change. “I feel like we are not addressing and representing a huge swab of the school district. This is really sad to me and, again, it’s not going to fulfill anything that you want,” Hanacek said. “At the end of the day, a lawsuit—but, of course, with the walkout, that cost us about 500 grand. There went any money that we would have for legal.” Numerous parents and local community members spoke against the vaccine mandate on the grounds of individual freedom, skepticism over its safety and effectiveness, and dislike of government control. Health experts have generally said vaccines are safe and help prevent the spread of COVID-19. “I realize that no one on this board wants to force these vaccines on students, and you don’t want to force them on teachers. I also know that you face serious consequences if you decide to go against the governor,” Vista Del Mar Middle School math teacher Craig Adnams said. “But I say, fight for us. If you fight for us, we will fight for you.” Some audience members felt the resolution did not go far enough, calling for the district to defy the mandate and sue the state—the latter desire again echoed by Davis. The meeting was, at times, tense as audience members variously cheered and jeered trustees—including Student Advisor Kanei Padhya. Trustees scolded the audience for their behavior and encouraged attendees to instead show approval by silently waving their hands. Some who spoke at the meeting, including Vanessa Santos, support the mandate. “I believe that vaccines are a really invaluable tool to fight disease, especially during global health pandemics like the one we’re going through. It’s how we are no longer living with polio,” Santos said. “It’s how we are no longer living with smallpox. It’s how we manage measles. It’s how we manage so much disease.” A rally to protest the mandate was held outside the CUSD offices before the meeting, and participants remained outside and loudly chanted anti-mandate slogans during the meeting. Parents and others held anti-mandate signs. John, a parent in Laguna Niguel who declined to give his last name, said he is opposed to mandates for everyone, but especially for kids. “I don’t think COVID is really an issue for the children especially, and for myself, I wouldn’t get it, either,” said John, whose daughter attends a private school outside the district. “I had it. It wasn’t that big of a deal. I took some hydroxychloroquine, and I’m fine. I think now that I have the immunity in my system, I don’t think it’s really an issue for me to get vaccinated. There’s no way I’m going to put that in my kid.” Orange County resident Jennifer Sterling addressed rallygoers with a megaphone and said battles against mandatory masks were the beginning. “It is communism,” Sterling said. “It’s not far-fetched that this country could turn, and it’s right now.” Collin Breaux Collin Breaux covers San Juan Capistrano and other South Orange County news as the City Editor for The Capistrano Dispatch. Before moving to California, he covered Hurricane Michael, politics and education in Panama City, Florida. He can be reached by email at cbreaux@picketfencemedia.com