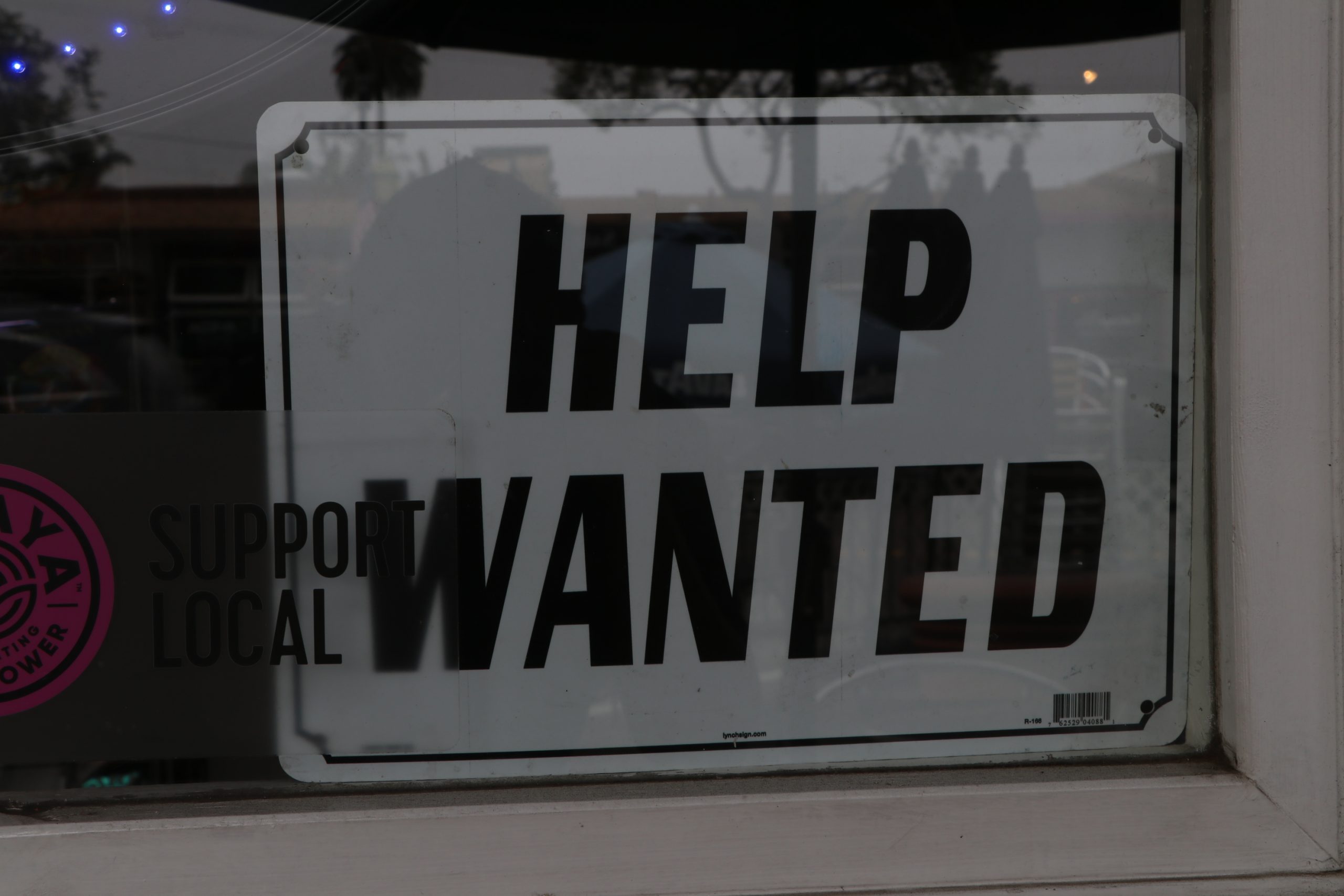 The nationwide unemployment rate fell to 5.8% during the month of May, the lowest it’s been since the pandemic began, signaling a growing return to normalcy as more Americans reenter the workforce and employers continue to fill jobs that were lost in the economic crisis.

According to the national jobs report that the Bureau of Labor Statistics released late last week, employers added 559,000 new jobs to the labor market, with the largest gains (292,000 positions) coming from the leisure and hospitality industry.

The latest unemployment rate, down from the 6.1% reported in April 2021, marked a steady decline since April 2020, when 23.1 million Americans were out of work, bringing the national jobless rate to its highest point during the pandemic at nearly 15%.

In California, the next jobs report for May won’t be released until later this month. For the month of April, though, statewide unemployment was reported at 8.3%, matching the previous month’s jobless rate, according to the latest report released on May 21.

Locally, Orange County and the three South County cities of Dana Point, San Clemente and San Juan Capistrano saw continued declines in their respective unemployment rates. Countywide unemployment was listed at 6.2% for April, down from the 6.3% reported in March.

Orange County Board Supervisor Lisa Bartlett, the Fifth District representative, said the most recent jobs report from the state’s Employment Development Department showed the county has made progress since a year ago, when unemployment was at its highest point, topping 14%.

“We still have a way to go from the county, but we are making progress,” she said. “The leisure and travel (industries) are just starting to get back and hiring employees again. We’re hoping, in each subsequent month, we’re going to have a drop in unemployment as staff gets hired again.”

For Jonathan Lightfoot, the city of San Clemente’s economic development officer, the relatively low jobless rate in San Clemente and the neighboring towns isn’t that surprising, as unemployment tends to be lower in areas with higher levels of education attainment.

Though San Clemente was impacted from the hit to the hospitality industry, it wasn’t nearly as significant as it was in other parts of the county that largely rely on tourism. The biggest area of concern for San Clemente, Lightfoot said, was in the events sector.

“We do have a good number of events and weddings, like at the Casino (San Clemente) and the (Ole Hanson) Beach Club,” he noted. “Those have been essentially shut down completely,” impacting contract personnel and event coordinators.

“Those jobs have not come back until now,” he added. “We’re starting to see those come back into play.”

Though unemployment continues to fall, Lightfoot and the local business community noted that companies have struggled recently to fill open positions for both low-wage and higher-paid jobs.

Several employers who have spoken with Jim Wynne, chairperson for the San Clemente Chamber of Commerce’s board of directors, said they’re “having a difficult time finding employees to work.”

Wynne added that the problem is seen across the board, as many business owners—especially in the Rancho San Clemente Business Park—have said they’re unable to find workers, including for manufacturing jobs that earn about $25 an hour.

On the subject, Lightfoot and Chris Aitken, who chairs the San Clemente Downtown Business Association’s Board of Directors, pointed to the service industry, explaining that local restaurant owners in particular are having a difficult time hiring workers.

“We are experiencing a tremendous difficulty to staff the restaurants sector for full service,” said Aitken, who added that some restaurants have begun offering incentives to new hires. “I think the restaurants have to be very creative to become fully staffed, as opposed to where the sector was at prior to the pandemic.”

The city council last week approved a new program requiring restaurants to pay a monthly fee to continue using public parking for their temporary outdoor dining patios. One stipulation that also requires establishments to operate six days a week for eight hours a day has prompted concern from those businesses struggling to hire staff.

“It’s not that they are choosing to only operate on certain days, it’s that they’re actively trying to hire additional workers,” Lightfoot said. “They’re unsuccessful in being able to open seven days a week.”

Addressing the cause of what’s been described as a labor shortage, Lightfoot cited news reports and concerns from other business owners who believe the unemployment benefits offered during the pandemic have de-incentivized citizens from reentering the workforce.

“Word on the street is, there’s definitely a lag of return to those jobs with the continuation of unemployment assistance,” Lightfoot said. “So that may not be an instant return. Even though the jobs are there, there’s a labor shortage.”

Employment in the restaurant and food service sector has become a national topic of discussion, garnering the attention of news outlets and economists, as well as many lawmakers and governors, some of whom have opted to end enhanced federal unemployment benefits earlier than the scheduled Sept. 6 expiration.

Since the U.S. Department of Labor released its jobs report for the month of April, showing less than anticipated job growth following the passage of the American Rescue Plan, some employers have attributed the so-called labor shortage to the extension of unemployment benefits.

Some economists and industry experts, however, contend that there is no labor shortage, arguing that there’s more nuance to the discussion of why restaurants aren’t seeing a return of employees as quickly as they would have liked to see.

“The reality is, is that there are a multitude of reasons that are keeping people in our industry from returning to work or leaving the industry and going elsewhere,” said Joshua Chaisson, president of Restaurant Workers for America, a nonprofit advocating for food servers and tipped employees.

“It was a real eye opener that something like a pandemic can destroy your livelihood in a quick fashion,” he continued, adding that “some folks went to a more pandemic-proof, or health-crisis-proof workplace, and ultimately did in fact leave the restaurant industry.”

Along those same lines, Chaisson explained, many workers are also weighing other considerations such as health care and child care costs before stepping back into the workforce, let alone a restaurant—where health and safety amid the pandemic are still an issue.

Echoing Chaisson’s point, Kiki Louya, executive director of the Restaurant Workers Community Foundation, emphasized that working in the service industry is hard, and that the past year has shown it’s a risky position to be in during a global pandemic.

Touching on the position of restaurant owners who believe workers aren’t incentivized to reenter the workforce because of unemployment benefits, Louya said that’s just not the case. Instead, she said, those expanded benefits have allowed many of those former restaurant workers to weigh other career opportunities and options.

“A lot of times, when you’re a low-wage employee, there’s this need, this pressure that you feel to get a job, just to make ends meet … it’s almost as though you’ll take anything because you have to take anything,” she said. “What expanded benefits for the unemployed have shown people is that when you have them (means) they no longer feel that pressure to take low-wages jobs.”

In California, the minimum wage for tipped workers is $14 an hour, or $13 if they’re working for an employer with a staff of 25 people or fewer.

Regardless of whether a person is earning $400 to $600 a week in tips on top of their wages, or are receiving unemployment benefits from the government, neither provides a livable wage, Louya stressed.

“We’re a little skewed on our values at this point, because that is not a livable wage, whether you’re on unemployment benefits or not, and it also comes down to the respect of our workers in the restaurant industry,” she said. “Don’t they deserve to be treated with respect and compensated fairly?”

For coastal cities such as San Clemente, where the cost of living is high, the process in finding local employees to work at minimum wage and earn tips is a balancing act—and a challenging one at that, Lightfoot said. .

“That’s definitely going to be a challenge for coastal cities to continue to find workers and find that right balance of ways small business can pay while staying in business,” Lightfoot said. “It’ll be something that has to be examined in the future.”

With the city beginning to see strong signs of economic growth, local restaurant owners’ inability to fully staff their workplaces is likely to limit the businesses’ ability to grow, limiting what they’re able to do,” Wynne explained.

A continued shortage would “impact their ability to grow revenue, because they only have so many servers … to serve the patrons out there,” Wynne said.

“I suspect the restaurant sector would do what it can do to go back to the full service that they were prior to the pandemic, but it is definitely a process that’s going to take some time,” he added.

Based on the labor department’s latest report, both Chaisson and Louya said service jobs are still on the rise. According to the report, nearly two-thirds of new jobs from the leisure and hospitality industry came from the food services sector and drinking establishments.

Orange County’s labor data from the month of April showed that leisure and hospitality also led job gains, adding 17,000 positions, with 5,600 of those coming from food services and drinking places.

Those gains, Chaisson noted, are only going to continue as summer ramps up—a common occurrence in the U.S.

“Our industry ramps up in enormous ways, so I consider ourselves to be lucky that the jobs report looked so great, and clearly folks are returning to the industry,” he said.

Lightfoot said that San Clemente is in a position to have a strong economic recovery, with those restaurants seeing more traffic in the coming months. That increased demand, he noted, could put restaurant owners in a position to potentially raise wages for their employees, attracting additional staff.

He added that he’s begun to see some businesses offering incentive programs and signing bonuses for new hires.

“I think businesses will explore options this year, because it’s a unique time to get back into the normal swing of things,” Lightfoot said. “It’s going to be a growing pain, but I’m confident they’ll figure it out.”